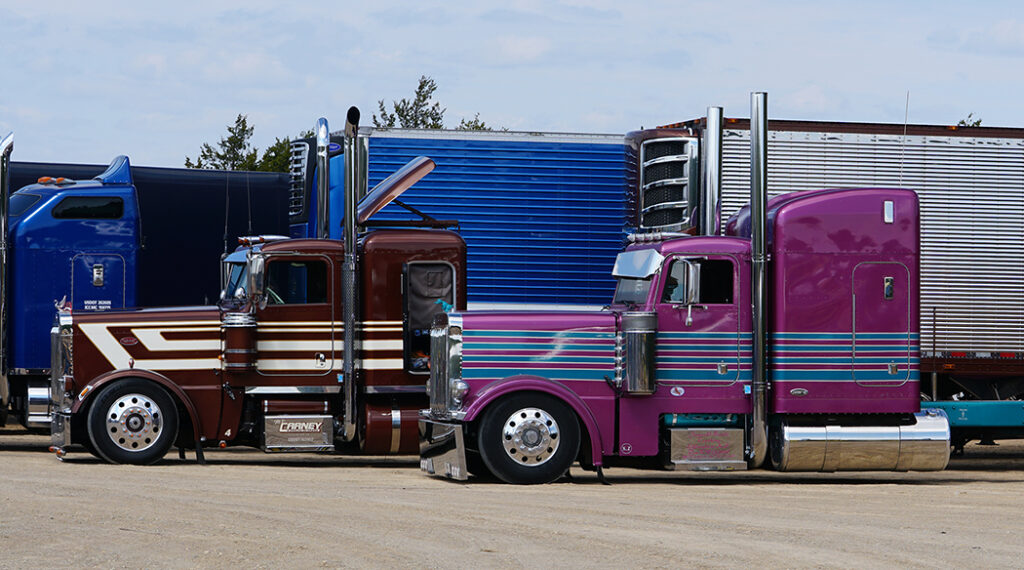 When my husband and I started showing trucks in 2014, I had no idea the impact it would have on our life and our family.  Flash forward eight years and the “family” we have met through shows and the trucking industry have been some of our greatest blessings.  Last year we hosted our first ever “Show & Shine For A Special Kind” truck show and raised money to help autistic children.  This year marked our second annual event, and we couldn’t be prouder of our industry and its accomplishments.

If you don’t know our family, our daughter Jolie was born prematurely in 2014 and has faced many medical issues in her short life.  As an infant she would sleep four hours in a 24-hour period, and those were not consecutive hours.  She has been in physical therapy, speech, and occupational therapy since she was only four months old.  And these appointments were never in the same building, on the same day or time, and were usually over an hour drive each way from our home.  Jolie hates to ride in the car, so you can imagine how unpleasant this was for all of us.  At two years of age, Jolie was evaluated for Autism, but it wasn’t until October 2020 that she finally received her Autism diagnosis.

It was in the summer of 2021 that I was introduced to Ashley Smith, CEO of Little Learners Spectrum Center.  She had a vision to open an all-inclusive Autism School that serviced children from birth to 12th grade and brought all of the children’s therapies under one roof.  We were ecstatic!  But there was one problem – to get the doors of this school open and begin the process would cost about $25,000.  The only way I knew to help was through a truck show.  So, my husband Terry and I spent the next few months sending out letters, emails, and walking truck shows with fliers to get the word out about our event.  Those efforts paid off, and we had a very successful first show in 2021, which helped get the center finally open.

This year Little Learners Spectrum Center was home to 63 children and has plans to enroll an additional 100 children soon.  They have added a Sensory Gym, a Community Village (a grocery store), a farm, and a doctor’s office.  It is now an amazing place where children can come and play (and get the help they need).  We now have our own physician in the center that is able to diagnose children with Autism within a few weeks instead of them having to go to St. Louis or Cape Girardeau and then wait up to a year for an answer.  So many wonderful things are happening at the center every day!

This year, our truck show had a few setbacks and had to find a new venue, but with the help of our friends John Highley and Ellie Turner we landed The Missouri Mines at St. Joe State Park in Park Hills, Missouri for the two-day event, held on October 7-8.  Featuring old mines as a backdrop, this location provided some neat opportunities for pictures.  Some folks didn’t mind the location’s dirt parking lot, and even said that it added to the laid-back feel of the show, which is what we love to hear.

The show opened on Friday to a beautiful, bright, and crisp 45-degree morning.  Registration opened at 9:00 AM and children that were chosen from Little Learners Spectrum Center were allowed to come and pick out their favorite truck to be photographed by Diesel Addict Photos (Stephanie Haas) to be a part of a calendar benefiting the school.  Don Carlos from Jackson, MO, our favorite Mexican restaurant, came to set up throughout the day and that evening Terry bought 500 tacos to do the “TRUCKN4TACOS 500” to show appreciation for the drivers that came out to support the show.  Friday night’s festivities ended with the light show, which was voted on by all of the show participants.  The winners were: 1st Dill McKinney, 2nd Mike Davidson, and 3rd Dalton Gebhardt.

On Saturday morning, we offered a sensory friendly time (10:00 AM to Noon) in which there were to be no train horns or Jake brakes so that the children that were sensitive to those noises were able to come out and enjoy the activities.  One special area that I loved seeing that was so simple was in front of David and Allye Eden’s truck from North Carolina.  They set up sensory bins with different types of grains for the kids to put their hands in.  This can be very therapeutic and comforting to kids with Autism.  It was certainly a favorite stop for our daughter Jolie, and Adeline chose David and Allye’s truck as her calendar pick.

Before the awards were presented, an auction was done by Thomas Sullivan with the Waylon Sullivan Foundation.  Thomas had an Autism flag made by Simon Perez, a fellow Lowes Syndrome parent, from Ft. Worth, Texas.  The flag sold for $1,500 to Josh Burch of East Texas Truck Center.  We are incredibly grateful to Bob’s Chrome Zone out of Indiana who, for the second year, made our puzzle-piece-shaped trophies.  Once again, these awards were voted on by their peers and issued to the top 20 trucks which were Dill McKinney, Michael Carney, Dave McKinney, Kyle Bellcock, Richard Darr, Josh Burch, Cattle Cartel, Colton Chase, Kenny Cunningham, Hull Trucking, Brandon Davis, Keith William Moore, Nick Buchheit, Shawn Dirksen, Huellinghoff Bros. Inc., Zach Glueck, Billy Sims, R.T. Clevens, James Stegall, and Moe Zurliene.

There were three specialty trophies handed out, as well.  Jolie, Athena, and Ari are all brilliant, sweet, beautiful, funny, little girls and all three have been diagnosed with Autism.  Jolie chose East Texas Truck Center’s blue and black Disorderly Conduct truck with a fish tank under the hood, saying, “Because of the fish!”  Athena is the daughter of Lynsey Gulley, who is the executive assistant to Ashley Smith, and she chose Kyle Bellcock’s “One Bad Buggy” rig.  Ari is the daughter of Cory and Ashley Smith, and she chose Richard Stevens’ blue Peterbilt, calling it “the Frozen truck” because of its pinstriping.

This year, my friend Stephanie Haas offered to donate her time and skills to photograph and create a calendar for the show.  Ten children from Little Learners Spectrum Center were able to come to the show and pick their favorite trucks for this calendar.  I heard some of the participants say this meant more to them than any trophy.  The calendar winners were Kyle Bellcock, Terry Aslinger, Cattle Cartel, Benton-Dement Farm, Keith William Moore, Richard Darr, Rooster Davis, Austin Jamvold Banks, Thomas Sullivan, Mike Reagan, Richard Stevens, and David Edens.

By the end of the weekend, we had registered 75 trucks and raised almost $25,000!  I’m so incredibly thankful to the people that continue to sponsor and support us, our show, and our baby.  I will never be able to thank you all enough or repay any of you for the things you’ve done to help us keep “Showing & Shining” For A Special Kind.  You all are amazing, and we love you!  Also, a big thank you to Stephanie Haas for providing the photographs for this show report.  Mark your calendars for next year’s show, which is now scheduled to happen on October 6-7, 2023.