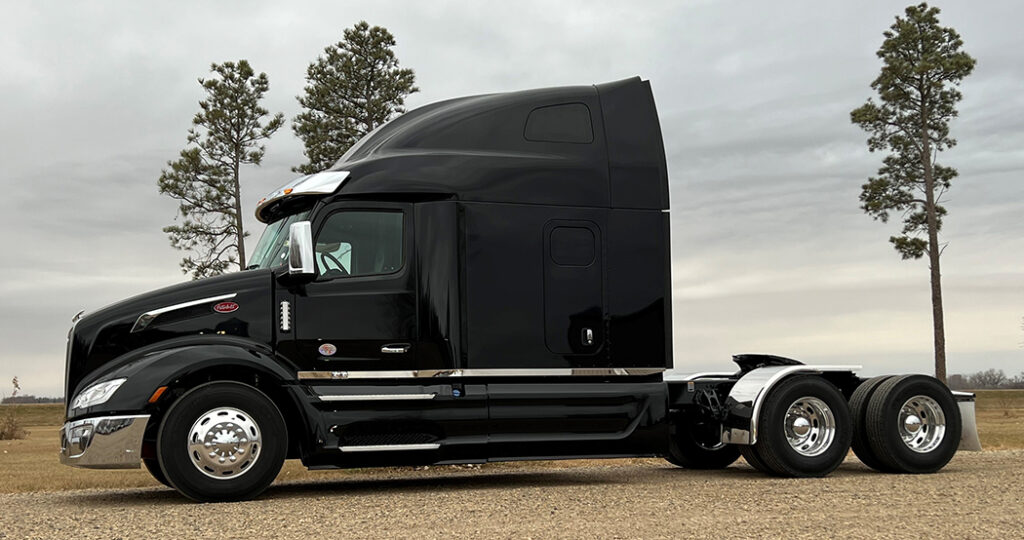 This month’s cool creation was built for Wehlander Brothers Trucking out of Milnor, ND.  This company was formed when two brothers, Terry and Kevin, sold a pair of 3-wheelers for the down payment on their first truck in 1999.  Today, they have grown to an 8-truck fleet of black and chrome beauties, with the addition of this latest one featured here.

Still a bachelor, Terry is the older brother, and he mostly takes care of his farm, but he is still half owner of the trucking operation.  Kevin (44) runs the trucking company, and is married to his wife Kari, who is a full-time dental assistant and mom.  Married for 20 years, the couple has three boys – Grady (17), Brees (12), and Kolter (10) – along with two dog children, Garber and Minnie.  Terry and Kevin have one younger sister named Carmin.  They are the children of Sherm Wehlander and Carol Stockstad (they split when Kevin was in the 2nd grade).

Growing up, Terry and Kevin worked at their grandpa Roger Wehlander’s farm, where they farmed, raised cattle, and hogs.  Kevin said no matter how late they would come in on Friday night, that Saturday morning, bright and early,  they were expected to help on the farm.

At first the farm only had a gas straight truck, but later their uncle Don suggested they get a tractor-trailer.  Kevin was in the 7th grade when the farm bought this first semi, which was a 1984 Kenworth COE with a BC Cummins.  Driving that KW is what sparked Kevin’s love of trucking.  Realizing the family farm wasn’t big enough to support three families, the brothers decided to buy a truck for Kevin to drive when he was 21 years old.  The brothers sold their beloved 3-wheelers (a 350X and a 200X) for the down payment.  This might not sound like a big deal, but these guys loved their machines.  That first truck was a 1993 Kenworth T600.

After purchasing fender brackets from me and being impressed by their durability, Kevin called me in 2019 and ordered two trucks.  Those first trucks were a pair of 567 Heritage Edition Peterbilts, dressed in black and chrome, of course.  The next year he replaced a couple 379X models he had with a pair of the last of the old dash 389s – they were black and chrome, as well.  This year, looking for a cool truck to run regional with, he called me again.

A lot of people don’t realize what’s been going on in the truck manufacturing business, but because of part shortage issues, PACCAR was forced to start allocating trucks to their dealers (we get a percentage of an average of the last few years of sales).  Sounds easy enough, except for the other part of the equation, the new laws enacted to reduce greenhouse gases.  Manufacturers are now required to build a certain percentage of aerodynamic trucks in order to produce the stuff most of us truck nuts like.  I have told everyone I know, if you see an aerodynamic Peterbilt truck on the road be nice because that truck, and others like it, let us continue to get the long hoods (for now).

Just as in life, rules are always going to be there, and you have to learn to adapt to the system and not fight it to get what you want.  In my allocation this year, 20% of the trucks I sell need to be aerodynamic.  Peterbilt has done an awesome job with the newer version of the model 579, so Kevin decided to give one a try.  Because the Ultraloft version has the best ratings to help Peterbilt in the numbers game, I told Kevin if he would take one of these trucks, he could have one of my build slots, and I would order it will all the good stuff.  He agreed and pictured here is what we came up with.  My mom always told me, “Do the best with what you get.”

This truck is a new 579 Peterbilt Ultraloft, powered by a 500-hp X-15 Cummins efficiency engine hooked to an 18-speed, and all black with some chrome.  When Kevin flew to Denton, TX to pick it up, it had been sitting a spell in a gravel lot.  When they pulled it around it was covered in dust, so it got its nickname “Dusty” really quick.  On the way home, while stopped for fuel, Kevin lifted the hood to see if the factory had snuck a PACCAR engine in it, because he couldn’t hear it run to shift.  Nope, she had a Cummins, it was just very quiet!

Kevin stopped by KC Peterbilt on the way home with “Dusty” and we rinsed off the dirt and tweaked a few things.  When Kevin got home, he added half-fenders and stainless goodies he bought from my awesome parts guy, Charles.

Kevin is thankful for his drivers – without them, the trucks would go nowhere.  They have an amazing group of drivers that have helped the brothers get where they are today.  One driver has been with them for 20 years.  We both agreed we are blessed with good people around us to help us succeed, along with a few cool black and chrome trucks!