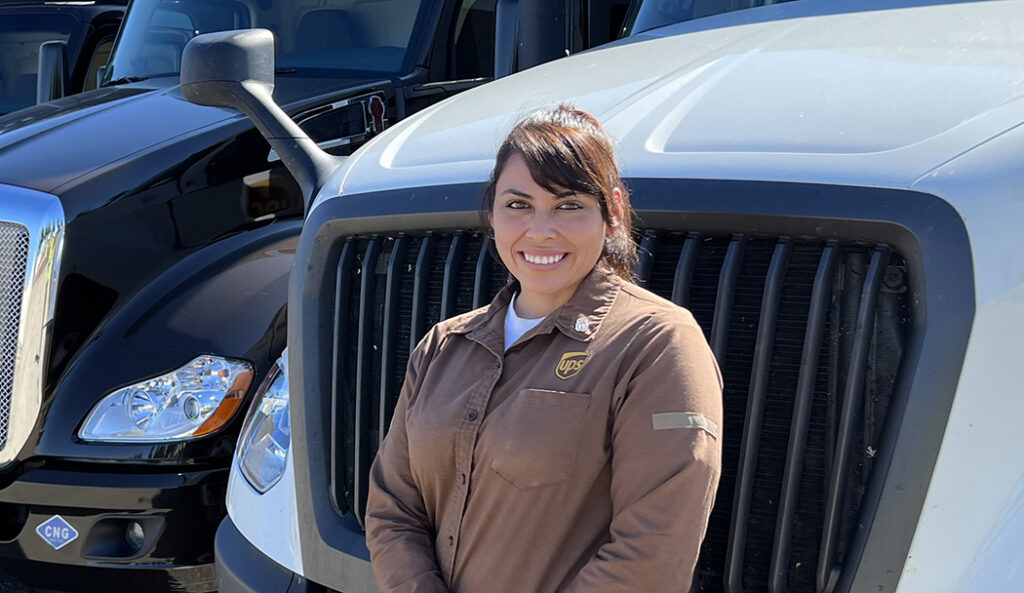 The Women In Trucking Association (WIT) has announced Raquel Sanchez as its November 2022 Member of the Month.  Sanchez is a feeder driver for United Parcel Service (UPS).  When Sanchez joined the Army National Guard in 2011, she was offered the opportunity to drive a truck.  Inspired by her father, Jim Sanchez, who has been a driver for UPS for more than 38 years, she realized her love for being behind the wheel.  Sanchez left the military after eight years and continued doing various jobs, however, never felt completely satisfied in her work.  Following the passion she found for driving trucks, Sanchez began her career at UPS in August 2019 as a part-time employee and loaded packages on to delivery trucks.  Progressing quickly, she became a delivery driver, and eventually began driving a semi-truck for UPS in February 2022.  Most recently, Sanchez and her father made history by being the first father and daughter long-haul team on the West Coast.  “As someone who is just starting their career, I feel blessed to have my dad by my side as a mentor,” said Sanchez.  “In 1997, my dad was on the first experimental UPS sleeper team when I was just seven years old.  Who would have thought I would be his partner all these years later?”  Since long-haul driving is a mostly sedentary job, Sanchez believes in the importance of staying healthy and focuses on nutritious foods to stay energized behind the wheel.  Additionally, when she is not driving, she makes it a priority to spend time in the gym, saying, “staying healthy allows me to keep moving packages from one destination to the next and I know I am doing my part to move the world forward by delivering what matters.”  Sanchez feels a sense of accomplishment driving a truck and encourages other women to pursue a career in this industry, saying, “more than 70 percent of goods and services are delivered by trucks and being able to deliver loads on time gives you a sense of self-importance and value and I feel proud of the work I do after completing my last stop of the day.”  Women In Trucking is a nonprofit association established to encourage the employment of women in the trucking industry, promote their accomplishments, and minimize obstacles faced by women working in the trucking industry.  Membership is not limited to women, as 17 percent of its members are men who support the mission.  Women In Trucking is supported by its members and the generosity of Gold Level Partners: Amazon, Arrow Truck Sales, Daimler Truck North America, FedEx Freight, Great Dane, J.B. Hunt Transport, Michelin North America, PACCAR, Penske Transportation Solutions, Ryder System, Walmart, and WM.  Follow WIT on Twitter, Facebook, LinkedIn, Instagram, TikTok, and YouTube.  For more information, visit WIT online at www.womenintrucking.org or call 888-464-9482.