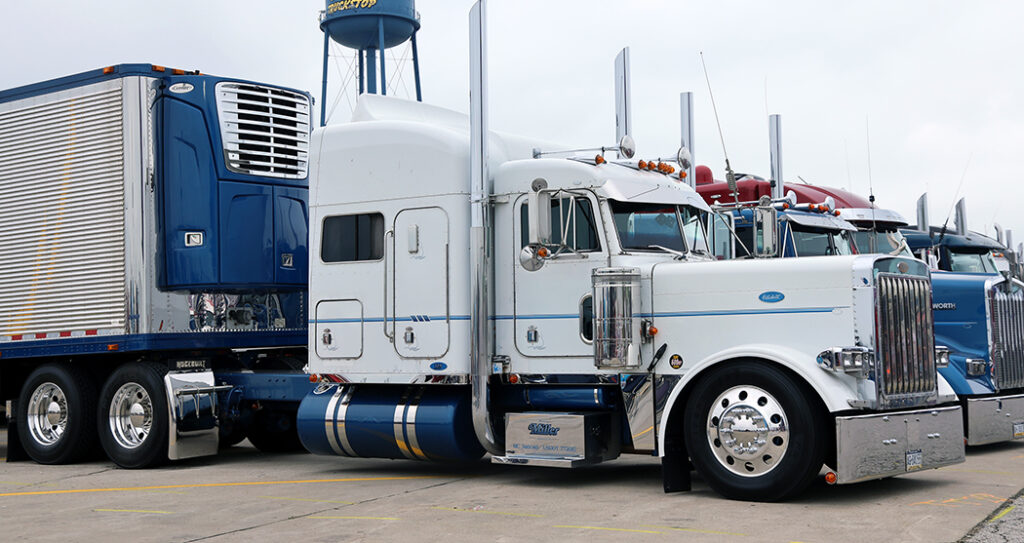 For 43 years the Walcott Truckers Jamboree has been held at the Iowa 80 truck stop.  This year, the event once again took place at the World’s Largest Truckstop on July 7-9, 2022, in Walcott, IA.  There were many planned activities that happened over the weekend.  This year’s show featured the Super Truck Beauty Contest, an antique truck display, the Iowa Pork Chop Cookout, Trucker Olympics, a BBQ cookout competition, fireworks, and concerts, which occurred on Thursday, Friday, and Saturday, along with other activities that took place in the Iowa 80 Trucking Museum.  This truck show has it all and proclaims to be the Best Trucker Party in the country – and I think they might be right!

The weather for the duration of the show was a mixed bag of sun, clouds, light rain, and pleasant temperatures for the entire three days.  Thankfully, it was not the typical hot, humid weather, with crazy rainstorms as has often been experienced at past shows.  We had lots of sunshine on Friday, which was great for taking photographs and viewing the show field.  Saturday was cloudy with some light rain in the morning, and then it turned into just cloudy and cool for the remainder of the day.  By the time I left Walcott on Sunday morning, it had started to clear up and the sun began to peek out from the clouds.

The Super Truck Beauty Contest is a judged event, and this year there were over 90 trophies awarded in 30 classes.  The most anticipated and coveted award is the Truckers Choice award, voted on by fellow competitors.  The winner of this award gets their truck made into the Truckers Jamboree die-cast collectible model for the following year’s event.  The 2022 Truckers Jamboree winner for Trucker’s Choice was Marcel Pontbriand of Pahrump, NV with his 1989 Peterbilt 379 and 2015 Great Dane van trailer.  In addition to winning this award, Marcel’s “Cowboy of the Road” truck also took home three other trophies, including Best Overall Theme, 1st place in the Working Truck/Company Truck Combo class, and 3rd place Interior in the OEM Conversion Sleeper class.

Another big winner at this year’s competition was Dan Brubaker, along with Ron Brubaker, and the entire crew from One of a Kind Customs out of Sigourney, IA.  Their 1996 “Lowlife” Peterbilt 379 garnered 1st place in the Show Truck class, the OEM Conversion Sleeper class, Lights at Night Bobtail, and 2nd place for Polish & Detail.  Ron Brubaker was awarded 2nd place in the OEM Conversion Sleeper class and 3rd in the Working Truck/2019-2022 Bobtail Conventional class.  The Brubakers took an impressive seven trophies back home with them to Sigourney.

One other truck and owner who had a good showing at the Jamboree was Conrad Shada of Anamosa, IA with his “Class of the Past” 2020 Peterbilt 389, that had the look of a 379 Pete.  Conrad took 1st place Polish & Detail/Bobtail, 1st place Lights at Night Bobtail, 2nd place in the Show Truck class, and 2nd place Custom Paint/Bobtail.  This was an impressive showing for this truck making its first presentation in the 2022 truck show season.  I met Conrad and spent time with he and his family and found them to be a wonderful, hard-working, and humble family, which is so prevalent in the trucking profession!

Mike and Jackie Wallace, who are  from Ashville, AL, were presented with four awards for their “Semper Fi” 2007 Freightliner Coronado and 2014 Great Dane trailer.  They took 1st place in Working Truck 2007 & Older Combo, 1st place Lights at Night Combination, 2nd place Interior/Custom Sleeper, and 2nd place Custom Graphics.  This nice and humble couple gave me a tour of the interior of their impressive truck and big sleeper.  Mike is a retired Marine who honorably served our country.  Thank you for your service, Mike.  Here’s a big Semper Fi shout-out to you!

Following is a list of some of the other 1st place winners (they hand out a lot of trophies).  In the Interior/Custom Sleeper class the winners were Daniel and Phyllis Snow and their green 1996 Freightliner Classic XL and 2013 Great Dane Utility trailer.  In the Lights at Night/Bobtail Theme class, the winner was Eva Knelsen with her 2021 KW W900L.  In the Custom Paint/Combo class, Logan Shaw and his 2022 KW W900L and 2022 Wilson trailer took the top honors, while in the Custom Graphics/Bobtail class, James Nalin and his 2022 Freightliner Cascadia won 1st place.  In the Custom Graphics/Combo class, Jonathan Alley and his nice 2017 International Lonestar and 2019 Great Dane trailer was the big winner.

In some of the specialty classes, 1st place in the Interior/OEM Sleeper Bobtail class went to Kelly Richardson’s 2022 Peterbilt 389, while in the Interior OEM Sleeper/Combo class, Kendall Weaver’s 1996 Kenworth W900L and 2022 XL Specialized trailer took top honors.  In the Lights at Night Combo Most Unique class, Douglas Prier and his 2022 Kenworth W900L got 1st place, while in the Lights at Night Combination Theme class, Daniel and Phyllis Snow once again grabbed the 1st place trophy.  In the Rat Rod class, Tim Feidt and his 1980 custom Mack Army truck bagged the 1st place award.

The success of the Walcott Iowa 80 Truckers Jamboree is, of course, due to the sponsors, advertisers, and exhibitors who provide financial support, as well as being on the show grounds at the event.  There was a total of 122 supporters who contributed in so many ways to make the 2022 Jamboree another successful one.  Besides the Mid-America Trucking Show, this show has the largest presence of sponsors, advertisers, and exhibitors of any truck show that I attend.  It’s an indication of the popularity and success of the Walcott Truckers Jamboree.

As many of you know, I’m always searching for good food and places to eat on my travels to different truck shows.  I’m especially fond of good BBQ.  The Truckers Jamboree provides a variety of food choices in the Iowa 80 truck stop, including the Iowa 80 Kitchen.  I have eaten at the Kitchen several times and the food is consistently good.  A unique eating spot only available during the Jamboree weekend is the Pork Chop Cookout tent.  Their primary offering is their pork chop sandwich or dinner plate with all the fixins.  They also offer other food, including chicken sandwiches and dinner plates.  There will be those who argue with me, but I believe the pork chops at the Pork Chop Cookout are the best I have ever eaten, and I’ve eaten quite few at this show over the years.

Besides the trucks participating in the show, there were several bands that put on great concerts throughout the event.  Thursday’s entertainment was provided by rising star Kylie Frey, who is popular in Texas.  The evening concert with Dani Lynn Howe and Band was followed by fireworks and the popular Lights of the Night show.  Friday night’s entertainment was provided by Mo’s Garage, followed by fireworks, and a concert presented by the super group Diamond Rio.  The first two events went off without a hitch, but the Diamond Rio concert didn’t begin until after midnight because the group had problems with their tour bus on the way.  The concert series ended Saturday afternoon with The Brat Pack out of Bloomington, IL who played some great 80s music.

This was another fun-filled Walcott Truckers Jamboree with a lot of things to see, do, and take in over a three-day period.  Dalia Moon Meier and her entire staff at the Iowa 80 Truck Stop put on yet another very well planned, organized, and highly successful Walcott Truckers Jamboree.  This event is in my backyard and a short two-hour drive from where I live, so I look forward to seeing what this show has to offer the second weekend of July 2023!  If you’re traveling along Iowa 80 that weekend, stop by and check it out.  It will be worth your time, as it is always a fantastic trucker party!