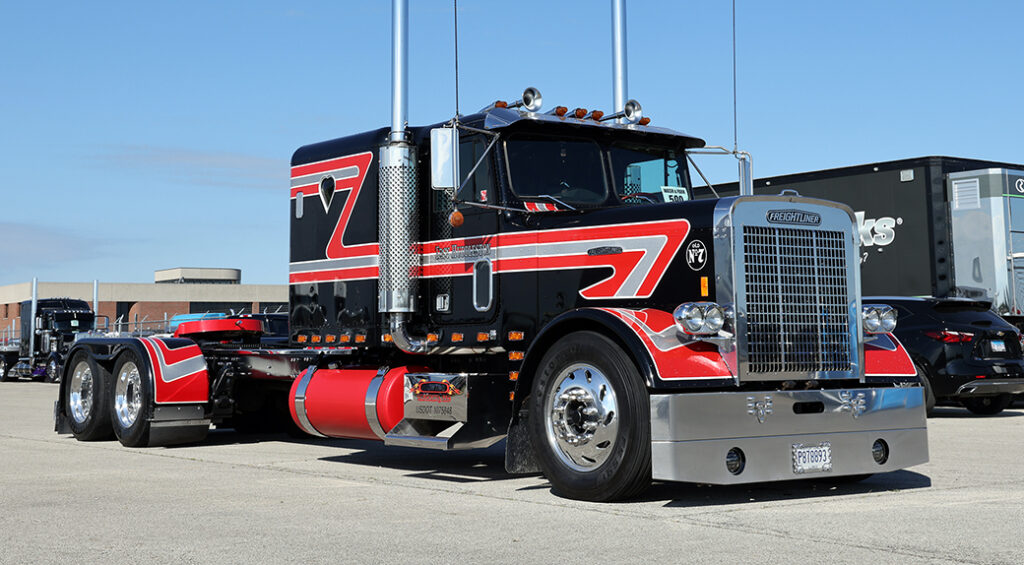 After ten long days in the Midwest, attending two trucks shows and doing photo shoots in Nebraska, Illinois, and Iowa, we ended our Summer Tour at the Top Gun Largecar Shootout.  Held again at the decommissioned Chanute Air Force Base in Rantoul, IL on July 29-31, 2022, this show had a record number of trucks thanks to some perfect weather, fantastic sponsors and vendors, and some special tributes in honor of some of our recently fallen trucking friends.

Arriving at the show on Friday morning, the weather was absolutely perfect.  Temps were in the mid-70s, the humidity was low, and the blue sky was filled with light, fluffy clouds.  We could not have asked for better conditions!  Our friend and contributor Stephanie Haas was on her way to Utah to cover a truck show, so she made a detour through Rantoul and was able to hang out with us there on Friday and Saturday.  Since we don’t get to do this with her very often, we made great use of the time, and had a lot of fun.  She was so excited to be at a truck show and not have to work – she was just there to spend time with us and enjoy the event – and she did!

With 235 trucks in attendance, that number narrowly beat out the show’s previous record.  And coming home with over 420 pictures in my two cameras, it was hard to choose just a handful for this report (I will put more on our website when this story gets posted there).  With a handful of vendors onsite that included Diesel Pride Apparel, OOIDA, Timpte Trailers, CIT Trucks, Lincoln Chrome, California Custom Polish, Dickerson Custom Trucks, and RoadWorks, there was plenty to see and do during the day.  Friday night featured the Parade of Lights through Rantoul, which is always well-received by the community.  Once the trucks got back from the rolling light parade and parked, a static light show proceeded until late into the night.

Saturday was a little bit warmer, but still really amazing weather for the Midwest in July.  In addition to the vendors and truck show, Saturday also featured a motorcycle show, which had about 60 cool bikes, a kid’s pedal pull contest, a Jake Brake competition, and another light show at night.  In honor of Troy Huddleston, who passed away on June 7, 2022, his blood family and his trucking family at RoadWorks brought out his 1991 Freightliner FLC “Roll With The Changes” to display.  Seeing his truck was a touching sight, and many were sad, but glad it was there.

Walking around and looking at all the trucks, there was some truly amazing iron out there in Rantoul.  One truck that really stood out to us – and obviously the judges – was the latest build from J&L Contracting in Springfield, MO.  Brought out by Matt Schreiner, the truck is a red 1987 Peterbilt 362 service truck with black and silver stripes.  Complete with a boom and every accessory and tool a service truck could have, this rig, which will eventually be used to maintain the J&L fleet, took four 1st place trophies, including Best of Show Bobtail Limited Miles, and was also chosen to be on next year’s show shirt.

With the awards happening at 9:30 on Sunday morning, tributes were made and awards were presented in honor of Troy Huddleston, Kameron Wilken, Paul Marcotte, and Top Gun show founder Tom Reitz.  There were plenty of tears, but also smiles, as people paid their respects for these inspiring individuals.  Some of the big winners included Arlyn & Linda Workman, Don Wood, Jordan Houtzel, Chad Smith, and Conrad Shada.  All of these folks took home “Best” awards in their classes.

Some other trucks we liked at the show were Dave Marti’s red and white 2011 Peterbilt 389, Steve Moss’ gray and red Peterbilt 389 with a Double Eagle sleeper, and Craig Morrison’s 2013 green and cream Kenworth T660.  One of my personal favorites was brought in by Jason Horning of Ephrata, PA – a dark blue Peterbilt 379 with a small flattop bunk.  Featuring a black stripe and black fenders, this simple truck was super clean, and really caught my eye.

Once the awards were handed out, it was time for everyone to head home, or on to their next load.  We stuck around for a bit longer to shoot pictures of all the big winners and the trucks for next year’s show shirts, then it was time for us to get to the airport and fly home.  Our ten-day Summer Tour 2022 adventure was over, and now it was time to head home for some much-needed R&R.  Thanks to everyone who made our trip enjoyable and memorable – you all know who you are.  And congratulations to DaVeda, Reuben, Joe, and everyone else involved  for putting on another fantastic event!  Thanks for having us!!