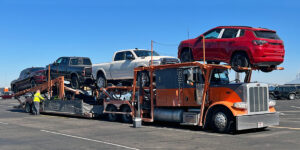 This month’s Veteran’s View goes out to all the drivers who are sweltering in the warm weather.  I am working up here in the north, so we don’t see too many days above 95 degrees.  However, I hear from drivers who routinely work where it gets up to 115 degrees or more.  I was in the Phoenix area last February taking time off to recover from some health issues when I got the opportunity to do some cross training and experience the life of open top car hauling.  I never have been known for my brilliance, but I’m always up for a challenge.  So, when Mr. Edward (Skip) Read called and asked if I was interested, I said, “Sure, sounds like fun.  When and where?”

The next day I found myself some place in the cold Arizona desert at zero dark thirty, and I’m trying to find a good route to the El Mirage train yard.  What could possibly go wrong?  I’ve made three left turns and we still aren’t going the correct direction.  There’s a light on the horizon – maybe it’s a coffee shop.  You know what they say: when all else fails, drink coffee.  Three black coffees later and some help from the locals, and now I’m headed the right way.  They weren’t all for me – just the first two.  The other one was for my friend and teacher for today, Mr. Read.  If you remember a few months ago, I wrote about a guy who slipped and fell while loading his car hauler.  He is back to work now, and since I was close to his yard, he asked if I could help.

I’ve done just about everything in trucking, but I’ve never hauled cars.  I was to report at 7:30 AM at the train yard for our pre-inspection and to receive our pick sheet.  All the information on the vehicles we were to load was listed, along with the location of where they are parked in the yard.  Without the proper location, the chance of finding your car is slim to none.  There are thousands of vehicles in the rail yard – rows and rows of them – of every size, color, and make.  Not to mention a bunch of half crazed truck drivers trying to collect their group of vehicles and stage them in a pattern that will help in the loading process.

This car-hauling deal is similar to most time sensitive jobs – if the wheels aren’t turning, they aren’t earning.  But, unlike going to a warehouse, where a forklift driver finds your stuff and brings it to you, this loading experience is driver generated.  Most of the time, loading cars is a one-man show, and it’s not for the lazy or the faint of heart.  If you are scared of heights or don’t like working on a ladder, this job may not be in your future.  After parking the transporter, we found a really cool four-door, long bed, one-ton pickup to ride around in.  Having help to drive an extra vehicle saves tons of time when compared to walking.  We will be okay, as long as the driver who is scheduled to pick up this truck doesn’t come looking for it!

I never gave much thought to how cars got on a carrier or why they were arranged the way they were.  All of us are vigilant about our axle weights and the bridge laws, depending on where we are and where we are going, and car haulers are no different.  But since they can’t slide their axle or run wide axle configurations, they must arrange the vehicles in a manner that displaces the weight correctly.  Skip (AKA Mr. Read) gave me a lesson on the types of vehicles that can be combined to make a load more profitable.

I was thinking more small cars would generate more revenue, therefor making more money.  I think his words were, “Hold up there, Hot Rod, a small car can be used as filler in a load of large, more valuable, or difficult vehicles.”  Smaller cars can also be used to load the overhead rack in the front to distribute the weight more evenly.

After we located all the equipment on our list, we then needed to inspect each vehicle for any damage or possible paperwork discrepancies.  Things like right make, correct color, oops – wrong serial number (it does happen when there are thousands of cars on a blacktop lot).  Sometimes, one gets put in the wrong spot.  More importantly, we were looking for paint damage or broken glass, missing wheel covers, things like that.  It does happen, and they need to document it before the vehicle is moved (I don’t know what they do if there is damage, because ours were okay).

After each one was checked, we then relocated them to a row behind the carrier.  But first I had to change my clothes.  Not knowing any better, I showed up wearing my normal work clothes of jeans, boots, and an overcoat.  Turns out these are all items that can cause damage when climbing around on the trailer during the loading process.  I was given a pair of cotton coveralls to wear over my street clothes, just in case.  The boots had to go, too, in favor of some deck shoes with soft gum soles.  Guess they didn’t want me to fall off the top deck, either.  Then, each vehicle was rechecked again for any damage.  Why twice?  Because now the sunlight was different, and the cars were no longer in the tight confines of the parking spot, so reflections were more easily seen.

At this point I thought we were about done – after all, we had been working for two hours and I needed more coffee.  No dice!  Once he started his process, Skip (Mr. Read) didn’t want to be distracted and possibly make a mistake or damage someone’s new prized possession!

Most of us who haul refrigerated or dry goods have a working knowledge of commodity weights and sizes.  A pallet of any produce will normally weigh roughly the same each time you load them.  Their weight can vary, depending on the time of year, weather, and other factors, but not a great amount.  The same goes for hauling cars, but it’s not weather that effects their weight, it is accessories and assembly configuration.  For example, a pickup truck with a V-6 motor will be considerably lighter than one with a diesel, and the driver has to know the difference.

Most parking lot drivers (auto transporters) I’ve talked to are motor heads to start with.  As a truck driver, many of us know our preferred brand and how we like to have it look or perform.  These guys don’t know just one brand, they must know every brand, and most of the configurations by weight.  Not just their gross weight, but the difference between models and options, because  when loading, some vehicles will be driven forward on the rack and others will be backed on to distribute weight accordingly.  If they get it wrong, the process starts again, and they unload and rearrange differently until they find the right combination.  Remember, the more they handle these cars, the greater the chances of potential damage.

The time to finally load had come, and my teacher asked if I wanted to put the first car on.  I was considering it, but then he mentioned it had to be backed on, and all the way to the overhead rack on the front.  My confidence said, “Sure, why not?”  But then my common sense said maybe I should watch a pro do it first.  Note to self – good choice, because it’s not as easy as it looks.  Now I have a better understanding of how he fell from the top deck while loading.  I would most likely have driven off the side of the carrier going forward, so it probably was not a good idea for me to be backing one up there without rails.  I was a nervous wreck just standing there and watching Skip do it!

The modern auto transporter is an engineering marvel.  They have come a long way from the days when drivers used wooden planks on a flatbed truck.  That’s why they cost so much and are quite difficult to operate.  Each deck is hydraulically controllable.  The whole platform becomes a mobile ramp for loading, and then each section can be raised or lowered to become a stable platform.  Most of the time the top decks are loaded first, then raised over height, to allow ample clearance when loading the lower decks.  Then, after securing the vehicles on the top deck, it is lowered and arranged for safe travels.

We loaded three full-size pickups and two small (economy sized) cars.  Remember that comment about filler units?  When we finished, the onboard scales were right on target at 29K on the trailer and 33K on the drives.  Sure, we could have taken on more weight, but there was no more room on the deck.  If my memory serves me right, I think we had to turn the middle pickup truck around and then reload it to get our axle weights just right.

Once again, I thought we were done, and could go to breakfast – nope!  Time to inspect everything again for clearance issues and to check that all the doors and windows were closed.  I cringe every time one of those huge Michigan potholes appear in the road.  My fear is it will cause one of my pallets to tip over or break open and spill its contents on the floor.  If the vehicle’s clearance is not sufficient and a driver hits that same pothole, the damage caused by bouncing a tailgate off the hood of someone’s car is not good.  That damage is covered by the trucking company, but it will most likely be charged back to the driver.  A carpenter’s rule of thumb is to measure twice and cut once.  In car hauling, they measure many times and take great care to ensure no vehicles ever touch.

After our final placement check, we redoubled the securement and, again, checked for rub points or pinch points.  I had put a strap on incorrectly, but Skip caught it and explained that if it worked loose there could be damage to the tire.  There is no substitute for attention to detail.  After one final walk around, we confirmed the height was legal and all our axles were within range.  One last stop at security for final paperwork, and then we (and that load) were finally headed to Las Vegas.

Who would have thought that five vehicles (3 pickups and 2 cars) would take five hours to load!  On a normal day, it would have been done much faster, but when someone new is working with you the time to explain safety measures and technical considerations adds to your day.  I’m not sure car hauling is in my future, but if opportunity knocks, at least I have some working knowledge as to how it’s done.  But now it’s time to get back to my vacation.  I’m tired.  I’m hungry.  And, most importantly, I need some coffee, 10-4!