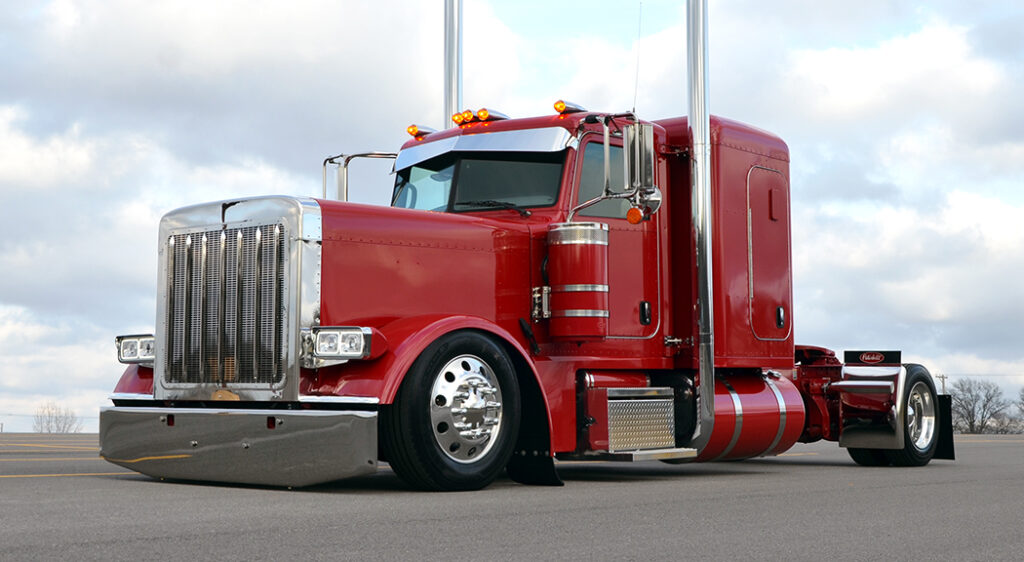 This month’s creation was built for Nick Sanchez (48) of Bakersfield, CA.  Growing up in a huge family that farmed, Nick was always taught if you didn’t want to work in the fields, you’d better get educated or find something else to do.  Thankfully, his dad had trucks, and Nick was able to gravitate toward them and, often, get out of the field work.  His dad was a big influence, and he always said, “If something scares you, there is probably a reward (money) hiding behind it.”  That helped motivate Nick to move past his fears and buy his own trucks.

Married to his wife Claudia for three years, Nick has two older daughters – Nickie (21) and Gizelle (17).  Nick met Claudia at a place he hauled in and out of, and she caught his eye.  Once he finally got the nerve to ask her out, the rest is history.  Claudia came with him to get the new truck and she was fun.  As mentioned before, Nick comes from a huge family – he is the 13th of 15 children of Gilbert and Celia Sanchez!  His dad passed away a year ago, and he and Nick’s mom were married 67 years.  Mom is still going strong and likes Nick’s new truck.

Growing up in this large family that farmed, Nick’s dad also trucked.  When it came time to harvest, the whole family was out in the fields.  Nick’s mom always said, “If you don’t like being in the field, get an education or get a better job.  If not, get used to it.”  At an early age, Nick would hang out with his dad as much as he could and worked on the trailers with him.  He remembers the first time he drove at 8 years old – they were short a driver and they were picking up product along the edge of a field.  His dad put the truck in low gear, got out, and told him to keep it straight.  This is when Nick fell in love with trucking.

Helping his dad work on the equipment, Nick enjoyed this time, and he thinks his dad did, too.  He worked with his dad until after high school and one year at junior college.  After working at Pep Boys as a parts salesperson, Nick got his CDL at 22 years old, and hasn’t looked back since.  He drove for his dad, and even a small while with Coca Cola, but was able to buy his first truck at age 26.  It was a 1992 Freightliner FLD120 single axle, and Nick says it was the best truck he ever owned.  He ran that FLD 1,400,000 miles before the engine needed to be rebuilt.  He was forced to sell that truck a few years ago due to the strict emission regulations in California.

Nick’s dad owned up to 15 trucks and 80 trailers at one time.  Nick always saw his dad as a risk taker, and even though a few ventures didn’t work out, his dad led a very successful life.  He taught Nick that when you are scared to try a new venture, behind that fear is usually money.  He always told him, “El Dinero está atrás de el miedo,” which translates to “Money is behind fear” – Nick always keeps this in the back of his mind.  At one point, Nick had 5 trucks, but he sold them after a couple got wrecked by drivers.  Five years ago, he purchased a W900L KW, which he ran until he purchased the new one here.

Our friend Scott Armas told Nick to call me, and once we got on the phone, Nick and I hit it right off.  I love to build 2-axle Peterbilts, so this was an exciting project for me.  The red truck is a 2022 Peterbilt 389 with an extended hood, a 48” flattop, nice wheelbase, a 565 Cummins X15, an 18-speed, and loaded with all the good stuff.  When the truck arrived in KC, Charlie hid the DEF tank, and then it was moved to the body shop where Mike, Cody and Pat the painter were in charge of dialing it in.

Some of the modifications made to this Pete include one of my Patent Pending body drop kits, a front air-ride system from Stuart at NorCal Customs, a special bumper built by Valley Chrome, a 379 grille crown, and more.  Fitted with double square headlights with shaved blinkers, the rig also got custom cab skirts, nice skinny straight stacks, an RLK visor, “glass is class” cab lights, painted breathers, painted air and fuel tanks, and polished Hogebuilt quarter fenders.

Nick doesn’t truck because he has to, he trucks because he loves it.  No matter what, we all have a boss.  Even if you own your truck, you still have to answer to someone.  But if you like what you do and you work hard, it will turn out good.  When it comes to his equipment, Nick believes doing things right the first time will be expensive, but it’s also worth it.  And if fear is holding you back, get over it, because success is probably hiding behind it!