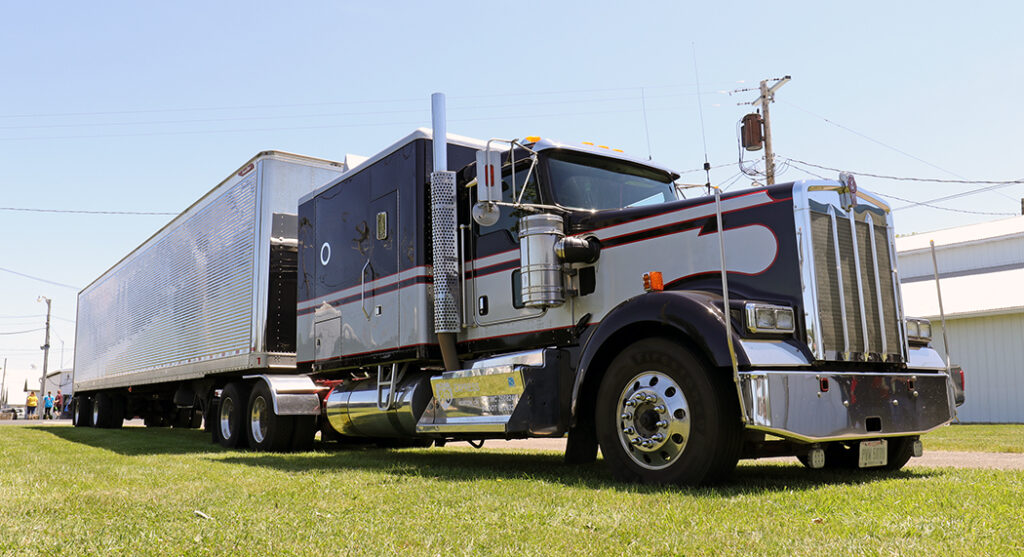 It is hard for me to believe, but the Ohio Vintage Truck Reunion is ten years old!  How time flies!!  In the past it was called the Ohio Vintage Truck Jamboree, but in 2020 they changed the name.  Due to the pandemic, the show was canceled that year, but many ATHS members still got together and had a convoy and raised money for a few local charities.  This year’s show was held June 18-19 at the usual location – the Ashland County Fairgrounds in Ashland, OH.  And we couldn’t have asked for a nicer day, which was mostly sunny, with temps in the mid-70s.  I missed the show on Saturday due to another commitment, but I was there all day on Sunday.

Once I arrived and got settled, I hit the ground running and began taking pictures.  Just as I got going, I noticed Dane Scott of the Trucker’s Lounge channel on YouTube was leaving.  I was able to chase him down and take a few pictures of his newly acquired white 1979 GMC Astro with a green stripe, which he has only had for a few weeks.  But I was happy to have finally met him and have a brief conversation with him before he left.  Then I noticed a silver 1982 International 9670, with maroon and black stripes, powered with a 400 Cummins Big Cam III hooked to a 13-speed.  Owned by Jim Phelps of West Lafayette, OH, this was the first time he brought the truck to the show.  It has been parked for several years, but just needed some love.  It is a sharp COE, indeed.

I was really surprised to see my friends Bob Keffer and his son Jacob, who own a red and white BJ and the Bear Kenworth combo.  I have seen these two quite a bit this year.  First, I saw them in Louisville, and then I saw them again at the Paul Riggle Truck Show, where they told me they were invited to attend the Kenworth factory truck show at their facility in Chillicothe, OH, which was being held on the day before this show (which is where I was on Saturday, too).  At that show, I told them about this show, and sure enough, like me, they drove overnight to attend this show on Sunday.  I was also able to introduce them to Miss Flatbed Red, who was walking around the truck and making a video.  I asked her if she would like to meet the owners, which she did, and then she proceeded to do a really cool interview with them.

Kevin Jones of Kent, OH brought a very cool 1984 Peterbilt 359 that was painted a slightly faded Firethorn red, had a 63” bunk, and was powered by a Cat.  He always operates some cool stuff, and always shows up to these truck shows with some really cool trucks.  He’s leased on with Kaplan Trucking Company of Cleveland, OH.  He told me the back story of this Pete 359, which he runs every day between Cleveland, OH and Gary, IN hauling steel coils.  I have seen this truck a lot this summer on the Ohio and Indiana turnpikes, as I have been running from Richfield, OH to South Holland, IL in my work truck.

In addition to the cool old trucks, there is a lot of other stuff to see, as well.  As you stroll around the grounds, there is old trucking music playing over a PA system throughout the day as you enjoy the truck memorabilia display, which features old truck magazines and such, album covers from the country artists that sang those old trucking songs, truck brochures of all kinds, and more.  Back in the day, truck brochures were pretty basic, but in the 70s, during the height of the trucking craze, the bigger companies started hiring great photographers that staged elaborate scenes with their trucks, in various applications, for their sales brochures and ads.  It’s now a lost art, as most manufacturers opt for computer generated “photos” of their trucks in all their ads, brochures, and posters.

Another great thing to take in at this show is the model truck display and contest.  There were many truly great builders that took the time to construct some great trucks and scenes.  With no numbers on many parts and pieces and sometimes very vague instructions, these models are not always easy to assemble.  It’s like anything else – it’s all about the prep, taking your time, and doing it right.  This year’s winners were: Youth – Jacob Reiselt; Novice – Dustin Davidson (who built a blue Revell kit of a Pete 359); and Expert – Jon Minard.  Jon built an entire scene that depicted an abandoned GMC Astro parked out in the woods.

Despite the sky-high fuel prices, there were still officially 258 power units at this show.  They raised over $4,000 for charity, filled a van with food, had their largest 50/50 raffle to date, and had the most vendors they ever had.  All in all, it was a very good year, considering where we are with our economy and all our everyday struggles with inflation and such.  Next year’s show will be held on June 24-25, 2023.  Mark your calendars now and make plans to attend, because this 11th annual event will be a great time, with some neat old trucks, and lots of really nice people.  Congratulations!  Here’s to ten more years!!

A Trucker Party
For Your Health
Summer Tour 2022
Keep Pushin’ On!
Be Confident In Yourself