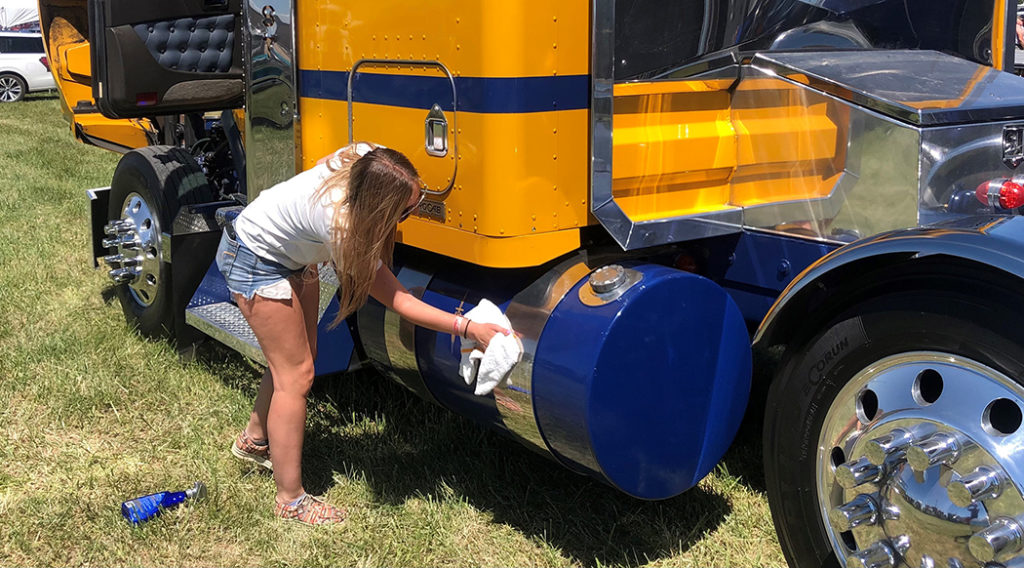 There’s a truck show that I’ve been wanting to go to for the last few years now, and this was finally the year I was able to attend the 8th Annual Southern Idaho Truck Show.  I took a load over to Boise that Friday, then blazed 100 miles east to Filer, Idaho, and pulled into the Twin County Fairgrounds where the show was held on June 25-26.  Marty Miles was first to the scene in his golf cart showing me where to park.  While Idling through the green grassy field, headed for my spot, I couldn’t help from getting excited and feeling a sense of that unmistakable “southern charm” that southern Idaho has to offer.

With a field already full of nice rides, great people, and plenty of green grass, the weekend started off right with a prime rib dinner with all the fixings for charity, hosted by the show producers, Matt Schilz and his wife Diana, along with the rest of their crew.  It was an awesome BBQ feast, with the proceeds, along with the rest of the show, going to an organization called The Anna Cheri Foundation, which helps fund adoptions for families and inspire people to care for orphans around the world.

After enjoying my delicious dinner, I started wandering around the show grounds, which were amazing.  This new venue had everything – it was like camping, but First Class!  Eventually, I ran into my good friends Sean Nelson and Willy Shapely.  Needless to say, between Sean, Willy, and Jake Fouts, rocking his 1997 Freightliner cabby, we were determined to cause trouble… until my dad Bill pulled in and set us all straight!  Like I said, it was getting dark, and there was a music festival right next door to the fairgrounds, so we gravitated over to that side of the venue after dark and enjoyed some great live music.

Saturday morning was awesome – I woke up, in the truck, to the smell of bacon!  Matt and his wife Diana and their two daughters, Kylie and McKenzie, and the whole rest of their crew, were out cooking a homestyle breakfast with all the fixings.  Before I knew it, dad and I were eating a king’s breakfast and, one by one, everybody started wandering out to eat, as well.  Then, before we knew it, it was show time.  What a day!

Jeremy Lusk and his beautiful orange and white Tri State Kenworth A-Model immediately caught my attention, along with Clyde Green’s maroon and white A-Model, which blew me away.  I really still can’t believe that Clyde let me drive it around to take pictures.  Thank you, Clyde.  Jimmy Johnston was there from Butte, MT with his 1966 Peterbilt 351A, dressed in faded green and gray, with plenty of patina (it was featured in our March 2020 issue), but now it was fitted with a polished Mercury sleeper.

California natives now living in Idaho, Jeff Badders (with his silver and black 2-axle Peterbilt 359) and Richard Hettinga (with his red Pete 389), were also there and brought their awesome Cali-style trucks where they belong – ag county, USA – Idaho.  Also there, from California, was C.G. Soza and his dark red and blue 2016 Kenworth W900L car carrier, which was very pressed-out and structurally perfect, in a lot of ways.

Later that day, my niece Shaylee Welsh showed up to say “hi” and walk around for a while.  After she helped me tidy up my Farwest Steel KW a bit, we went to check out Gary Amoth’s new Kenworth W990 and hang out with him, Eldin, and Corey from Amoth.  As always, Amoth had a bunch of their striking Viper Red rigs on-site, including a mix of their classic A-Models from the early days, along with some of their newer rides, including the W990.  Not my favorite model of truck ever built, but I have to say, their W990 is top-notch, just like all of their sweet rides.

Probably the coolest part of the day was meeting an an energetic 16-year-old photographer named Layton Henderson.  After she showed me her awesome light show shots from Friday night and then told me about her hard-working mom, Stephanie Henderson, who drives a 2005 white and pink W900L tugging triples, I was pretty floored – by both of these amazing ladies.  I am also proud to give Layton some well-deserved credit for helping me with this report and a few of her light show shots of the trucks on Friday night.  Keep up the good work, Layton!  I am excited to see what you can accomplish.

What a great retreat to normalcy this Southern Idaho Truck Show was for all of us.  This event had it all, including an amazing venue, good weather, great people, big rides, tasty food, and all for a great cause.  Mix in a little southern (Idaho) charm, and you got an event that is capable of tripling in size in a hurry.  My hat goes off to Matt and his crew for producing such a fantastic event, that will only get better each year.  If you missed it in 2021, I highly encourage you to put it on your calendar for 2022.  Stay tuned to 10-4 Magazine for dates and details as they become available.

Truckstar Festival 2011- Mooiste Truck Verkiezing met Weeda, Termeer en Gebr. Koot
Rola Wörgl Austria
2020 Jeep Gladiator Off-Road Pickup: Here Is Everything You Need to Know!
Ford vs GM vs Ram: Who Did The Best Job Re-inventing the Tailgate? We Test & Rank Them!
These Are the LEAST (and MOST Safe) New Trucks You Can Buy Today!