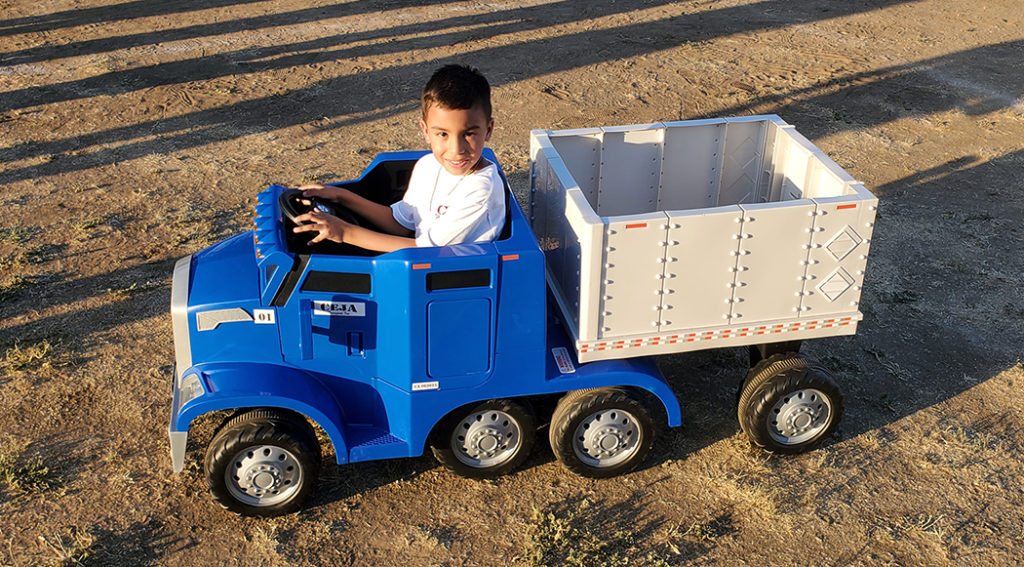 Greetings from the Merced County Fairgrounds in Central California where we were lucky enough to attend the first annual Soza Memorial Truck Show.  This event took place over Father’s Day weekend (June 19-20) in what turned out to be one of the hottest weekends on record for this time of year.  Still, it was a great event for dad’s to be able to come and see this incredible first-ever show, which raised money for a good cause, and turned out to be a great success.

Saturday’s temperature was 111 degrees, but with the humidity between 20-30% and a soft breeze, it actually made the heat a bit more bearable at the fairgrounds.  Another cooling factor was that the area reserved for the truck show was on grass, which was a lot cooler than the blacktop!  While the dust stirred up in a few dry patches, all the trucks were easily able to keep their shine up and the dust down throughout the weekend.

Even with the triple digit heat, that did not stop the 104 trucks (dare we say 10-4 trucks) from showing up, along with over 450 participants on Saturday.  In this post-Covid era, it was great to see these show-quality daily drivers pulling in on Friday and Saturday that were brought by those that did all they had to do to survive the hardships we all saw in 2020.  Now, with the worst hopefully behind us, it was nice to watch all the drivers shaking hands with those they hadn’t seen in a long time.  The elation that the shows were back on the calendar was very evident.

This show was held in memoriam to the father of the event’s organizer, C.G. Soza.  C.G. lost his dad Cornelio “Corny” Silva Soza in 2019.  C.G. is a 3rd generation truck driver who rode in his dad’s truck in a car seat that was mounted on the doghouse of his dad’s cabover.  They always joked that there was diesel in his baby bottle – and he’s been drinking it every day since.

While this truck show was held in memoriam to C.G.’s dad, there were additional motivating factors, as well.  Sadly, in 2016, C.G.’s wife and son were killed in an auto accident while they were on their way to a tutoring class for his son’s dyslexia in the next county.  C.G. himself had dyslexia when growing up, but he worked hard to overcome it.

This truck show, in honor of these lost loved ones, will help children with dyslexia.  Monies raised from this event (and future ones, too) will help fund local dyslexia tutoring classes in Merced County so families don’t have to drive to faraway towns like his wife and son were doing at the time of their accident.  He also plans to help have more kids in the area tested so this learning disability doesn’t remain undiagnosed with the children in their community.

Remarried to his wife Ashleigh, her and C.G. have two young boys that will surely be the 4th generation of drivers in the Soza family, assuming their sister, C.G.’s daughter from his first marriage, doesn’t get behind the wheel first.

When I asked C.G. if he planned on doing this show again, he laughed and asked if I thought he had a choice.  After seeing the turnout, as well as the response from drivers, vendors and participants, it seems pretty obvious, he didn’t have much of a choice.  However, all jokes aside, it was obvious that he was happy and excited to start planning to do this all again.  And why not?  C.G. was blessed with a support system that included his hard-working wife, his right-hand man Brent Scroggins, and a dedicated crew of volunteers and friends that worked more than the entire weekend to ensure that this inaugural event was a success.

Sitting at the entrance to the grounds were some awesome wreckers attending the show.  Three heavy duty units from Bill’s Towing made quite the display by two of them suspending the third in the air between them.  Another big unit, painted lime green, brought by Allways Towing, held up a huge American flag at the truck entrance that could be seen from anywhere at the show.

California is known for its tacos, so there had to be tacos at this event.  Serving some of the best street tacos we have had in a while, the grill was manned by Carlos and Marlene Espinoza.  Carlos sub-hauls with C.G. in a 2015 Peterbilt 579 pulling a 5308 Cottrell auto hauler trailer.  For this event, the trailer was temporarily converted into a taco truck!  C.G. and Carlos have been friends for over a decade, which I can understand (as good as those tacos were, I’m now friends with Carlos, as well).  He also served bacon-wrapped hot dogs, quesa birrias, nachos, super nachos and five flavors of aguas frescas, made fresh right there on the converted car hauler.

Saturday was capped off with a light show at dusk that went late into the night.  The band Stagecoach played for several hours and covered some great country and blues music from the 70s and 80s, along with some tunes from Roy Orbison and Johnny Cash.  With about 90% of the 104 trucks turning on their lights after dark and plenty of spectators still walking around the show and listening to the music (and the various trucks with big sound systems), the turnout for the light show was tremendous – there was even a little dancing in front of a few of the trucks.  With the sun finally down and cooler temperatures, it made for a very enjoyable evening.

Sunday was a slightly cooler 108 degrees, and while the crowds were expectedly lighter, the enthusiasm and buzz for this event was not diminished.  Everyone was excited for the raffle prize giveaways, as well as the awards.  Three tables of prizes were given away including air horns, suds and shine kits, various lights, and a chrome tapered bumper with rolled ends, just to name a few.  One of the auction items worth mentioning was a 16-inch, hand carved, wood Peterbilt truck and trailer combo made by Jeff Delacy.  This thing was incredibly detailed – nice job, Jeff!

The Soza family ended their event with more than 20 categories of awards for the drivers that attended.  Some notable mentions go out to Carballo Transport for earning the Best of Show trophy with their slammed black 2-axle Pete 389 with blue stripes, along with the People’s Choice going to Perez Trucking for their uniquely colored flat green 2000 Pete 379.  Other winners included North Coast Wine, Hildebrand’s stellar lineup, Lil’ Ray’s Transport, and Bill’s Towing, who brought out the previously mentioned wreckers, and took all three trophies in the Heavy Haul class.

After paying all the bills, C.G. was finally able to tally the amount of money raised.  A big “thank you” to everybody who came out and supported the first annual Soza Memorial Truck Show, which cleared $19,202!  The next step for C.G. is to get their official nonprofit organization established, but in the meantime, they plan to start using some of that money to get scholarships lined up for kids to get tutoring and testing for dyslexia.  Stay tuned to 10-4 for more updates on scholarship recipients and next year’s show dates!  And this year’s winners were:

Our Epic Ford F-150 Lightning Alaska Trip Is On! Check out Day 1 & 2
The New VW California Is The Coolest Van You Can’t Buy & Here’s Why!
2017 GMC Sierra eAssist Hybrid: Everything You Ever Wanted to Know
These Are the LEAST (and MOST Safe) New Trucks You Can Buy Today!
Truckstar Festival 2012 – DecibellenContest Finale #V8power.nl