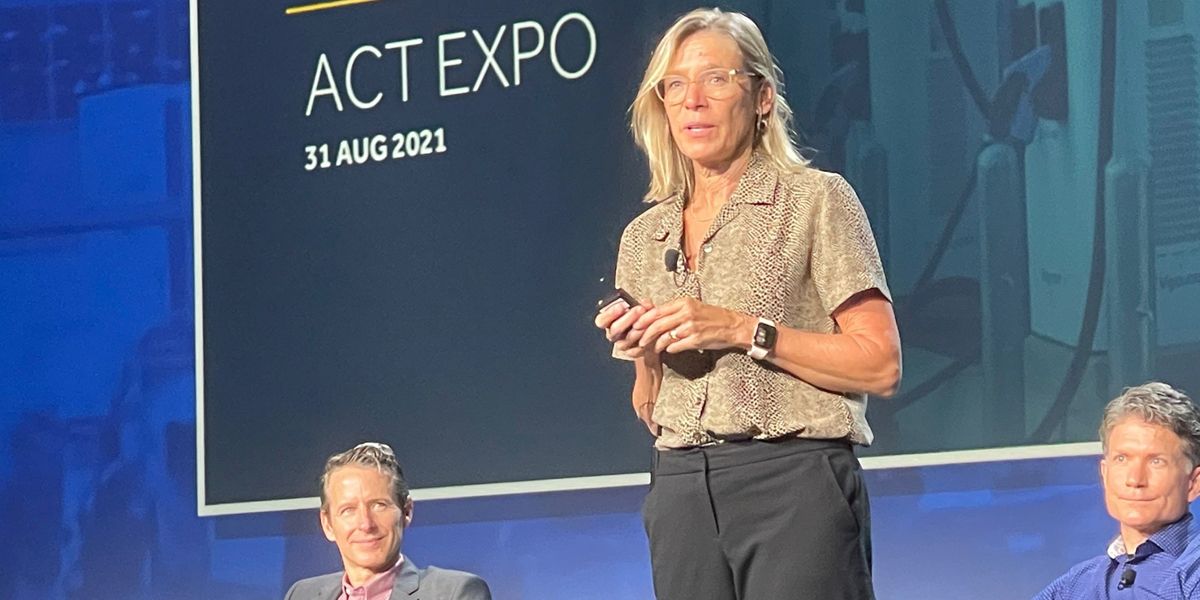 During a panel discussion at the Advanced Clean Energy Exposition, industry experts explained that last mile delivery fleets will likely be an early adopter of electric vehicle technology.

E-commerce generated a staggering $4 trillion in revenue during 2020, and the demand for faster, more efficient freight is only increasing annually, explained Paul Rosa, senior vice president of procurement and fleets for Penske Truck Leasing. Rosa led the panel discussion at the ACT Expo.

The need for smarter, greener last mile solutions has led General Motors to create BrightDrop, a tech start-up to develop an electric delivery van for last mile applications, and an autonomous freight pallet that can move up to 200 pounds of cargo over short distances.

“Despite our GM heritage, we at BrightDrop are working on a lot more than new vehicles,” Jonathan Katz, president and CEO of BrightDrop, said during the panel. “From the first mile to the last mile, we are designing and building a new generation of electric vans, pallets and software services to help fleets move freight.”

Katz said software is at the heart of everything BrightDrop does, and that connected, IOT devices will soon give fleets “unprecedented” visibility, control and insights into operations in real time.

“When we integrate these systems and use them together in, say, a delivery van, we start to have a real time chain of custody for each delivery that vehicle makes,” Katz said.

FedEx recently announced a corporate commitment to be a completely carbon neutral company by 2040, which means that the global pick-up and delivery service company needs to move aggressively electrify its last mile operations, explained Boris Kort-Packard, chief engineer of global vehicles at FedEx.

“FedEx owns and operates nearly 700 cargo airplanes in 200 countries around the world,” he said. “And we need them because our e-commerce business has exploded. We are moving 19 million shipments every day. But, it’s very hard for us to reduce aircraft emissions. It can be done with new green bio fuels. But it will take time. What we can do today is to start to employ green delivery systems like electric delivery bikes, as well as electric vans and trucks up to Class 7, to reduce our carbon footprint now. And so, our focus now is to understand these new technologies so we can help get them to scale and be successful using them worldwide.”

“The goal is to make the USPS — one of the largest, if not the largest, fleet in the world — a 100% zero emission agency over the course of that 10-year contract,” said President and CEO John Pfeifer.

Doing so, Pfeifer added, would have obvious downstream effects on electric vehicle technology focused on the last mile and help speed up its adoption by private fleets.

Cathy Zoi, president and CEO of EVgo, a supplier of electric charging stations, said that fleets need highly flexible and reliable power grid networks that a can accommodate a host of different charging requirements.

During the panel discussion, she noted that while fleets have options for charging solutions at their base of operations, as well as either dedicated or shared hub stations away from that base, a widespread public charging network remains elusive.

“Battery costs are coming down,” she noted. “And in high mileage applications, electric wins the TCO comparison now.”

But she cautioned ACT Expo attendees, each fleet that goes electric will require a different mix of charging solutions to support those vehicles.

“Some fleets running one shift of trucks may only need one set of chargers,” she explained. “But another may need two sets of chargers and fat-charging capabilities. And other fleets may need access to remote, fast-charging stations to give its trucks the range they need to complete their routes and return to base at night.”

In many cases, Zoi added, construction of electric infrastructure can be both time consuming and costly.

“You’re looking at anywhere from 10 to 24 months of preparation before you get to the construction phase of installing your electric infrastructure,” said said. “And actual construction can last between four to eight weeks. You’re going to have to deal with transformers, service upgrades, landlord easements and lawyers. It’s not scary. But nobody is used to this yet. You may find yourself dealing with the same guy in your town who issues permits for the parking meters in front of the local library or the county architect. That sort of thing will be brand new for a lot of fleets.”

Zoi said fleet managers need to understand that not all electric utilities are excited about electric vehicles, because of the strain they will put on the existing grid and the fact that eventually, large-scale deployment of electric cars and trucks will force them to spend millions of dollars to overhaul and upgrade their power networks.

“The good news electric vehicles and infrastructure are key components in the Biden Infrastructure Bill pending in Congress,” Zoi added. “So, we now have a national aspiration pushing adoption of electric vehicles. Hopefully reluctant power companies will understand they need to staff up for what’s coming and understand they need to be partners with fleets in this new technology.”

The regulations and incentives coming out of California help a lot, too, FedEx’s Kort-Packard added.

“They drive a lot of development, interest and purchases, which helps us build a business case for fleet density,” he said. “It’s a good, safe, environment to learn about electric trucks in. And, as time goes on, we’ll get better ideas about how to work on infrastructure, route management and other issues.”

Rola Wörgl Austria
2017 GMC Sierra eAssist Hybrid: Everything You Ever Wanted to Know
These Are the LEAST (and MOST Safe) New Trucks You Can Buy Today!
The New VW California Is The Coolest Van You Can’t Buy & Here’s Why!
Our Epic Ford F-150 Lightning Alaska Trip Is On! Check out Day 1 & 2