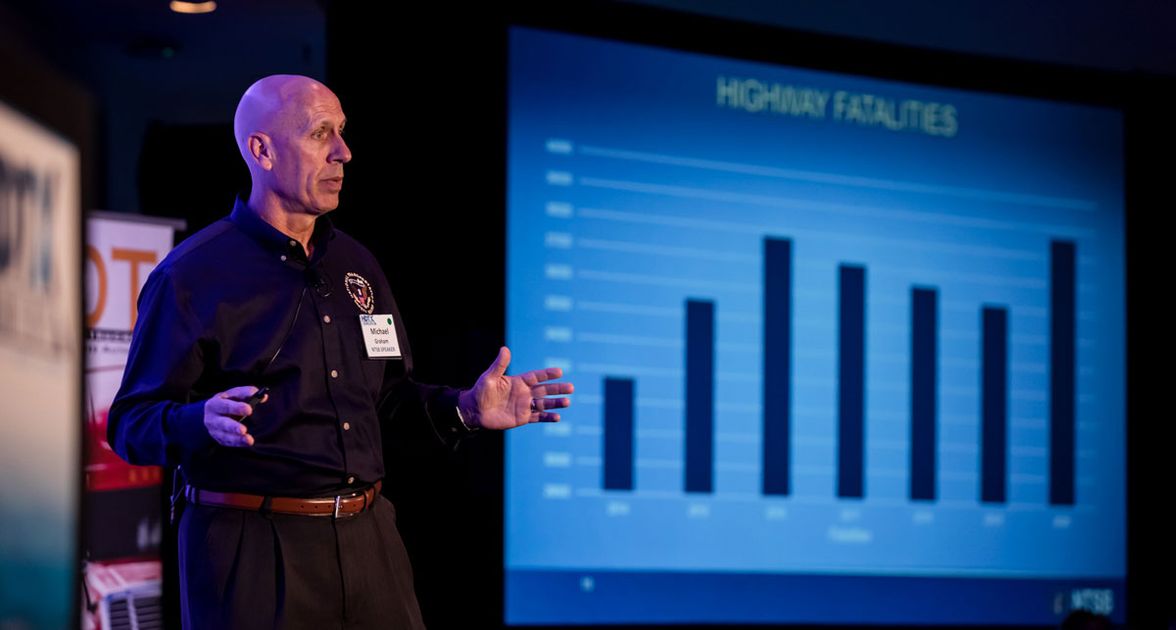 Michael Graham is on a personal mission to reduce the number of rear-end crashes. The National Transportation Safety Board member told a group of fleet and supplier representatives that he believes one way to do that is by installing collision avoidance systems on trucks.

During his opening keynote speech at Heavy Duty Trucking Exchange Aug. 25 in Scottsdale, Arizona, Graham pointed out that of 10 major investigations currently under way at the NTSB, four are this type of crash — crashes that potentially could have been prevented or made less severe through collision avoidance technology. He asked the fleet audience to consider investing in this technology to save lives.

NTSB is an independent government agency tasked with investigating significant transportation crashes, determining their cause(s) and making recommendations to help keep that type of crash from happening again in the future.

Could Collision-Avoidance Technology Have Prevented This Crash?

One rear-end crash investigation NTSB investigators recently finished was a July 2018 crash on I-84 in Boise, Idaho. A lane was closed due to construction and traffic was lined up for a mile. The in-cab camera showed the truck still traveling at 60 mph as it bore down upon the stopped traffic.

“The driver never even tried to stop,” Graham said. The tractor-trailer plowed into a Jeep, which was forced under the tractor-trailer in front of it. The truck driver was killed, along with three people in the jeep.

“We believe the driver was pretty severely fatigued,” Graham said, with only six hours of rest the previous two days. When the agency reviewed the dash cam footage of the 15 minutes leading up to the crash, investigators discovered the driver had drifted into adjacent lanes about 20 times.

“Could this crash have been prevented?” he asked. The owner-operator’s truck was only about a year old, a Volvo on which the Volvo Active Driver Assist system, or VADA, was standard. But to save about $2,500, the buyer “deleted” the standard spec from his order.

“One thing we do not do at NTSB is a cost-benefit analysis of our recommendations,” Graham said. “That’s up to the regulators. But in this case, I’m going to say it does” provide a greater benefit than cost.

He cited 2014 Federal Motor Carrier Safety Administration figures estimating the average cost of a crash at $91,000. For injury crashes that rises to $200,000; for fatalities, $3.6 million.

Does the technology work? Graham shared videos from an Insurance Institute for Highway Safety study demonstrating a truck with and without collision avoidance and what happens if the driver doesn’t react to the presence of a [in this case fake] car stopped ahead.

The IIHS found in that study that equipping large trucks with forward collision warning and automatic emergency braking systems could eliminate more than two out of five crashes in which a truck rear-ends another vehicle. It found trucks equipped with forward collision warning had 22% fewer crashes, and trucks with AEB had 12% fewer crashes than those without either technology.

Graham emphasized that collision avoidance systems are an additional layer of protection.

“It’s not going to do the work for the driver. But it may reduce the severity of the crash and ultimately save lives. It’s an assistance tool for the driver, because nobody’s perfect. They all get distracted, they all get fatigued.”

Before Graham took the stage, we sat down for a one-on-one interview.

Q: Your background is in aviation. Since becoming a part of the NTSB, how has that background played into working with other modes of transportation, such as trucking?

A: I think it’s played into it quite well, because most of my aviation career I’ve been in a safety role. I guess you’d call me somewhat of an expert in safety management systems… and I think that plays in very well with a lot of these other modes of transportation, because I think safety management systems fit across all modes. It’s just a real simple way of managing your risk and engaging all your people within the operation as the safety officers.

Q: We’re seeing a lot more interest in that concept of a safety culture, that it’s not just the safety manager’s job to make sure things are safe, that it has to be throughout the whole company.

A: That’s exactly what it is. You know, when I started in aviation, you said, ‘Hey, where’s the safety officer? Oh, he’s down the hall, two doors on the right. That’s where safety was. Safety management systems come down from above, are endorsed from the top, and completely engaged from the C-suite or the leadership of the company, and it basically empowers every employee to be the safety officer. If they see something, they say something, they report it.

My last operation I was part of before I came to the board, we knew our safety risk profile, we knew our higher risk operations in most areas, we were pretty good at mitigating that risk. But It’s amazing when you get employee reporting, you find out just how good your procedures and policies are, the things people experience on the front line that you’ll never know unless they report. It’s just a great way to engage people, make them feel like they are part of the whole company and make a difference, and they do in a safety management system.

Q: On the NTSB Most Wanted List that came out earlier this year, I know one that you have special interest in is collision-avoidance and connected-vehicle technologies. In fact you wrote a blog on it earlier this week. Tell us about your view on this technology and why it’s so important.

A: First thing, people ask, ‘What’s an aviation guy doing talking about collision avoidance?’ Actually, some of my background has been working with upgrading avionics and aircraft. It’s the same thing, it’s safety systems, it’s safety technology in a vehicle, and I have a lot of experience in that area. To me it was a no-brainer. Collision avoidance systems, it’s one of these [types of] accidents that happen over and over again, and this technology will assist drivers and hopefully prevent that accident or reduce the severity of injuries and hopefully ultimately save a lot of lives.

Q: Have you had a chance to talk much with people in the trucking industry about this?

A: I’ve just started meeting with some of the organizations, and you guys have a lot of organizations. You look at the size of the trucking industry; it’s massive compared to aviation. We’ve been reaching out, I’m taking this message out again to NPTC [National Private Truck Council] in about two weeks. We’ve talked to ATA, they’re a close partner also.

And the one I really want to reach, too, I was always warned, the owner-operators, the independent drivers, you watch out for those guys. But you know what, they’re a part of the trucking industry, too. Yeah, maybe they are a tough sell, but that’s a group we need to reach out to, and I plan on doing that here in the very near future.

Q: NTSB can’t make regulations, so how do you go about trying to move the needle on this issue? Is it mostly trying to get the industry to adopt it voluntarily? Are you working with agencies to try to get regulations created?

A: That’s a great question. Actually, it’s a little bit of everything you said.

I’m not a big regulation guy. I lived with a ton of regulations from the FAA, and to me that was always kind of the minimum, what you had to do. My operations, we always tried to go above and beyond that; we knew minimum wasn’t good enough. We could do better, and it was a lot safer.

So in this case, I would rather see industry voluntarily put collision avoidance systems on their vehicles. I think eventually it’s going to come regulatory-wise. So that’s why we reach out in our advocacy to organizations and try to get [industry] to do it before it becomes regulatory.

Q: Shortly after you became a board member in 2000, you talked about human factors in an NTSB podcast. What are human factors and why are they important?

One of the things I think is very important, it’s going to be very difficult to lower accident or fatality rates in any of the modes unless we look at people’s behavior. What makes a person think they can text and drive at the same time? We need to look at what makes them do what they do. If we can figure that out, we can change the behavior, and that’s when we’re going to be able to significantly reduce accident rates.

Q: Autonomous vehicles. You mentioned “unmanned vehicles” in your written confirmation testimony, the new NTSB chair mentioned them in a Bloomberg interview recently. Tell me about your perspective there.

A: They’re coming. I can’t tell you when. I don’t think anyone really knows. Collision avoidance systems, assisted driving systems, those are the precursors to autonomous vehicles.

We’ve seen that coming in aviation, in commercial space, we’re really trying to get out ahead of this. Because unfortunately, when humans are involved, even with programming, mistakes are going to be made, and we need to make sure we have backup systems in place.

Q: What key takeaway(s) would you really like to communicate to the trucking audience?

A. Nobody’s perfect. We all make mistakes. In my long career in aviation, I never saw a perfect operation, and in my time at the NTSB, there’s definitely no perfect operation, across any of the modes. And we never will. So it’s constant mitigation of the risk of your operation.