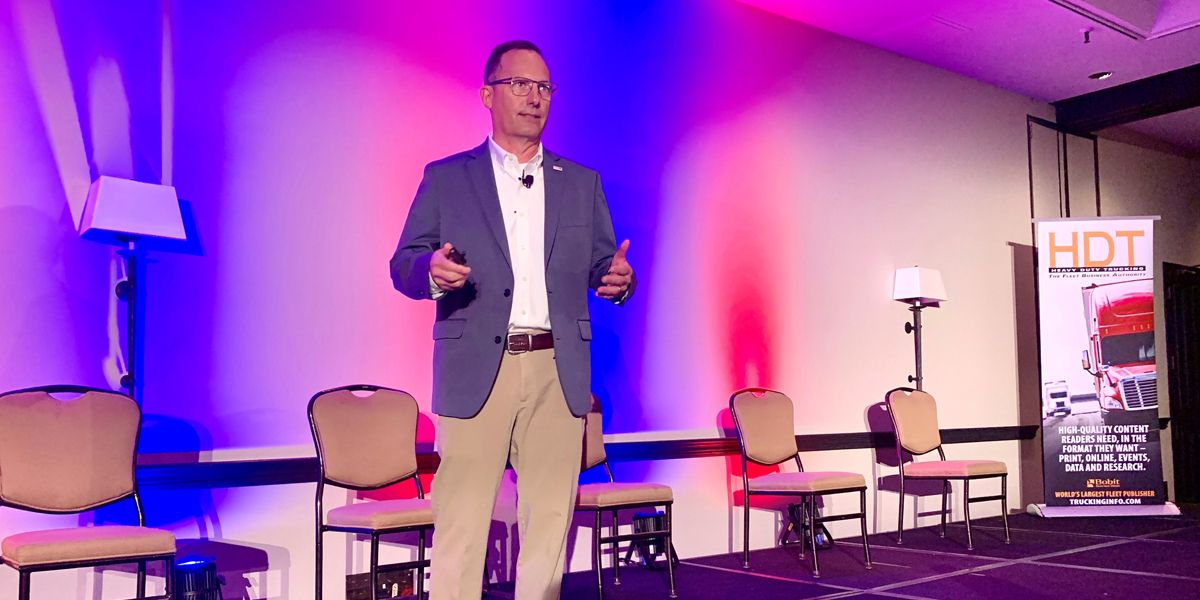 For the first time, Run on Less Electric will evaluate battery-electric trucks in real-world operations nationwide to determine how productive they are compared to diesel trucks.

“Obviously we’re going to be exploring all new metrics as we evaluate these electric trucks,” Roeth told HDTX attendees. “One of the keys, for example, will be range extension. Right now, many of these trucks are limited to 200 to 300 miles of daily operating range. One thing we’ll b looking at is how new technologies and practices — including driver training — can safely and effectively extend those numbers in the 250- to 320 mile range. When you get to that point, you can get a lot done with those trucks — on par with diesel-powered trucks.”

There are other electric truck differences to explore as well, Roeth added.

“We here about battery weight a lot,” he noted. “But diesel powertrains and engine fluids weight a lot, too. So, at NACFE, our analysts decided to see just how much engine fluids weigh in a conventional truck, and discovered they add about 530 pounds to the vehicle’s gross weight. And all of those fluids and components will not be present on an electric truck.”

The top issue, though, Roeth said, is charging procedures and infrastructure.

“Charging infrastructure will start at fleet depots and eventual expand to what we call ‘opportunity charging,’” he said. “That will be the ability to plug a truck in for an hour — or even 30 minutes — while it’s a stop being unloaded. Those opportunity charges, once they’re available, will help extend electric truck range and help them cover more miles in a day.”

“It’s a site-dependent calculation,” he explained. “But every power grid has peak times of day when electricity usage goes up — when people get off work and go home and start cooking dinner and watching TV, for example. So fleets have to understand when those peak demands are, and charge trucks accordingly. One Run Less Electric Feet participant, for example, has their trucks back at the depot and plugged in around 3 in the afternoon. But, timers keep the chargers from replenishing the batteries until late at night or early in the morning once peak electric demand has ended.”

And even before Run on Less Electric has begun, Roeth said NACFE is already learning valuable lessons about real-world electric truck operations.

“I’ve been in trucking for decades and honestly didn’t understand yard tractors,” Roeth said. “But it turns out that they’re a great place to start with electric trucks and learn the basics. They only move around 10 to 15 mph, so they don’t use a lot of power quickly. And, we found that using quick-charge techniques — having the trucks charge any time the driver is taking a break, fleets are able to keep these trucks in continual service for up to 22 hours a day.”

The four heavy electric trucks participating in the Run on Less Electrical trials are all in California, Roeth added. To date, one fleet reports that it is already getting the same day’s worth of work from its electric truck that it gets from a comparable diesel truck.

“The other three fleets are only getting a portion of a diesel truck’s daily work done at the moment,” he said. “But those trucks will do more work as the batteries and other technologies improve. And that seems to be happening rapidly.”

Run on Less Electric will begin its evaluation runs on Sept. 2 and run through Sept. 19. NACFE will be posting daily performance updates during the Run. You can check that performance data on a daily basis at RunOnLess.com

In 2017, Roeth said, NACFE decided to tell its member fleets “bragging” about their great fuel economy numbers to either “put up or shut,” and launched its very first Run on Less evaluation trials. The trails pitted Class 8, long-haul fleets against one another, to determine which participant’s particular blend of fuel-saving technologies delivered the best miles-per-gallon average in real-world operations. All told, the seven fleets participating in this inaugural Run on Less event logged a 10.1 fuel economy average, proving that the technologies NACFE was evaluating and recommending indeed produced verified efficiency improvements.

In 2019, NACFE tackled a much tougher fleet application with its Run on Less Regional evaluation, which looked at technologies on fleets running shorter regional routes. This time, the 10 fleets using NACFE-approved fuel-saving technologies scored a collective 8.3 mpg average, which Roeth said was an impressive feat given that regional haul fleets face much tougher operational challenges when it comes to maximizing fuel economy.

NACFE is a non-profit group which evaluates and reports on the viability of new and emerging technologies that can help commercial truck fleets save fuel while maintaining, or even enhancing, the efficiency of their operations.