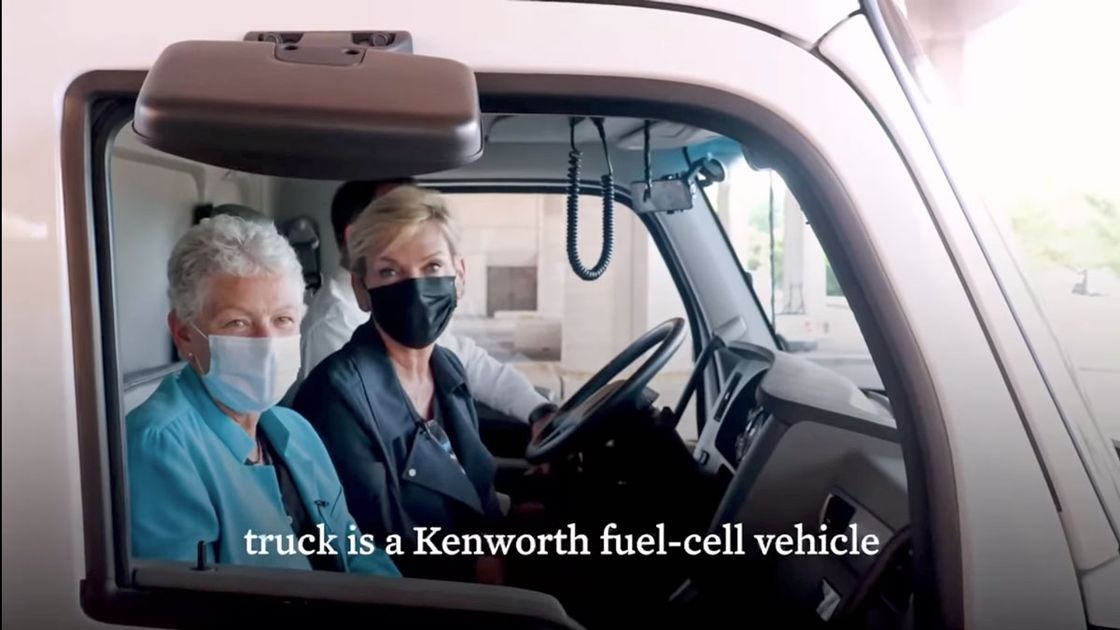 Paccar zero-emissions trucks recently made a visit to Washington, D.C., where White House and congressional officials got a chance to check out the latest battery-electric and fuel-cell-electric technology. And if the resulting White House video was an indication, they were a hit.

The visit began with a U.S. Department of Energy press conference where Energy Secretary Jennifer Granholm announced $60 million in funding for 24 research and development projects, which include projects directly related to reducing emissions through battery and electrification technologies being used within the transportation industry.

Following the press conference, Granholm and National Climate Advisor Gina McCarthy filmed a White House Weekly Conversation video in the cab of a Kenworth fuel-cell electric truck, using it for a backdrop to talk about White House efforts to promote zero-emission vehicles, U.S. manufacturing, and jobs. McCarthy called it a “classy Class 8 truck,” while Granholm took the opportunity to honk the horn.

(Kenworth is working with Toyota and the Port of Los Angeles to test fuel-cell-electric trucks in southern California.)

Meanwhile, Commerce Secretary Gina Raimondo took the Peterbilt Model 579EV for a ride around the Capitol. Granholm and McCarthy call her on the CB from the cab of the Kenworth to talk about semiconductors, which have been a stumbling block for both auto and truck production. Over a thousand semiconductors go into each of these trucks, Raimondo pointed out, promoting Biden’s Chips Act.

The next day, the battery-electric Model 579EV was on display at Peace Monument directly in front of the steps leading up to the Capitol building. Several members of Congress stopped by, including Republican Texas Sen. Ted Cruz as well as Delaware Democratic Sen. Tom Carper, chairman of the Senate Environment and Public Works Committee.

Reporting on trucking since 1990, Deborah is known for her award-winning magazine editorials and in-depth features on diverse issues, from the driver shortage to maintenance to rapidly changing technology. 28 Jesse H. Neal honors.

Reporting on trucking since 1990, Deborah is known for her award-winning magazine editorials and in-depth features on diverse issues, from the driver shortage to maintenance to rapidly changing technology. 28 Jesse H. Neal honors.