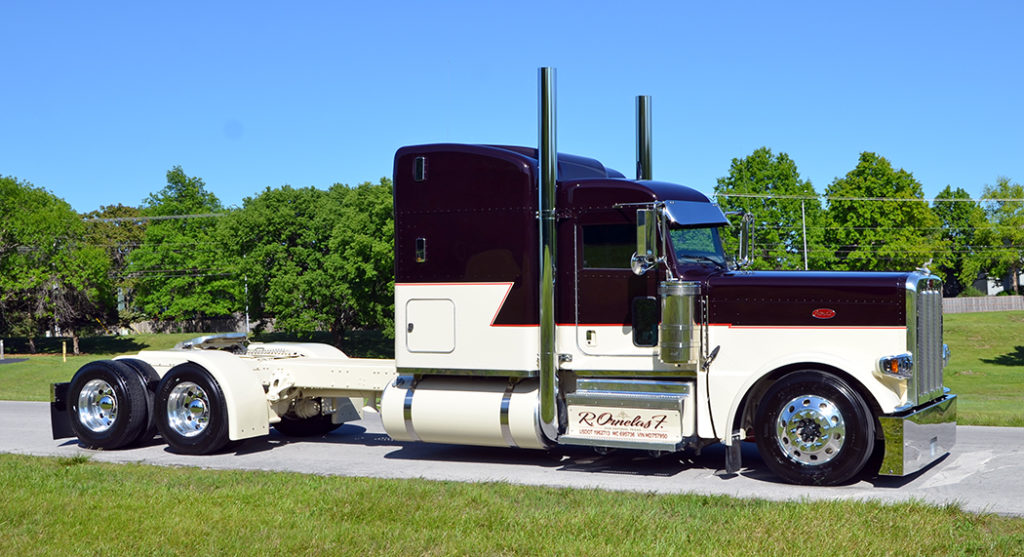 This month’s creation was built for Ricardo Ornelas Franco (41) of San Antonio, TX.  Ricardo is one of nicest and most patient people I have ever met.  He was awesome to work with!  He also lives by a motto, taught to him by a helpful owner operator, that says, “Do it right, not twice!”  Since we didn’t want to build this truck twice, we decided to do it right the first time, even if it took a little longer.

Married to his wife Jessica since 2004, the couple has four kids – twins Jacob and Jacqueline (16), Jazmin (11), who designed the paint scheme, and Lucas (6).  Ricardo met his wife right after high school, and the two just hit it off.  Ricardo is one of nine children to his parents, Jesus and Carmen.

Immigrating legally to the United States from Mexico, Jesus worked in the dairies in Chino, CA.  Getting his Green Card in 1986, Jesus applied for his family to move here in 1988.  It took until 1994 to get the approval.  A year later, they finally all moved to the Chino area of Southern California.  Graduating from Chino High School, Ricardo then went to work in the dairies.  After suffering an ankle injury that put him out of work for a while, he decided to switch gears.

After he recovered from his injury, Ricardo went through the driver training program at C.R. England Trucking, got his CDL, and then worked for them for a year.  After that, he landed a job at FedEx as a driver and then, after a year, he was approved to be an owner operator for them.  In 2005, he began looking for a good used truck with no luck, then his wife suggested that he just buy a new one – so he did.  Purchasing a 2006 Pete 379 with a 36” flattop sleeper, he drove that truck until replacing it with the one here.

An owner operator for FedEx until 2010, Ricardo eventually left there and began pulling a flatbed.  Being a first-generation trucker, he needed some guidance.  Thankfully, he met a driver named George Lime that took a liking to Ricardo and helped him learn the ropes.  Ricardo wanted to give him a big thank you for all his knowledge and help over the years.  George taught him the motto, “Do it right, not twice!”  And Ricardo tries to live by that motto each and every day he can.

Even though he loved his 379 and took good care of it, he knew it was time to replace it.  After getting a referral and my number from a friend, Ricardo called and ordered this truck – a 2021 Pete 389 with a 63” HR sleeper, a 295” wheelbase, a 605-hp high-torque Cummins, an 18-speed, and loaded with all the goodies.

When Ricardo was younger, he owned a sweet 64-1/2 Mustang (the first year) painted Black Cherry, so that is the color he ordered, along with Cream.  Not knowing how to mix the colors, he got some help from his daughter Jazmin, who made a colored drawing of the paint scheme (which was also sent to the folks at the factory).

When the new truck showed up, it became a permanent fixture in our parking lot.  We were really loaded with work, and with all the COVID shutdowns and lack of parts and people, we were not able to touch it for a while.  Once David and Ricardo found most of the pieces, it finally came inside, where Jared was given the project to complete.  I have to say, throughout all the waiting, Ricardo never once said a negative thing – he always had a very positive outlook, which was super refreshing to deal with.

Liking everything symmetrical, we hid the DEF tank in a box on the driver’s side to match the box on the passenger side, then painted them Cream with polished steps.  We also installed fully functioning 7” straight pipes, all LED lights with smoked lenses, dump valves to the steer axle, and had a special bumper made.  The truck also got a stainless visor with lights on top, matching 150-gallon painted fuel tanks with polished ends, a painted deck plate from Merritt, a shox box, painted Fisher half fenders, a custom rear light bar, and a real 3-bell train horn.  To make the hood look longer, we painted half of the grille crown, along with the back of the headlights.

Running his first truck 1.3 million miles, there’s no telling how long he will drive this one.  Ricardo lives by the philosophy, “Do it right, not twice” so it only made sense to put that on the dash plaque.  Plus, well, we think we did it right for him the first time, too!