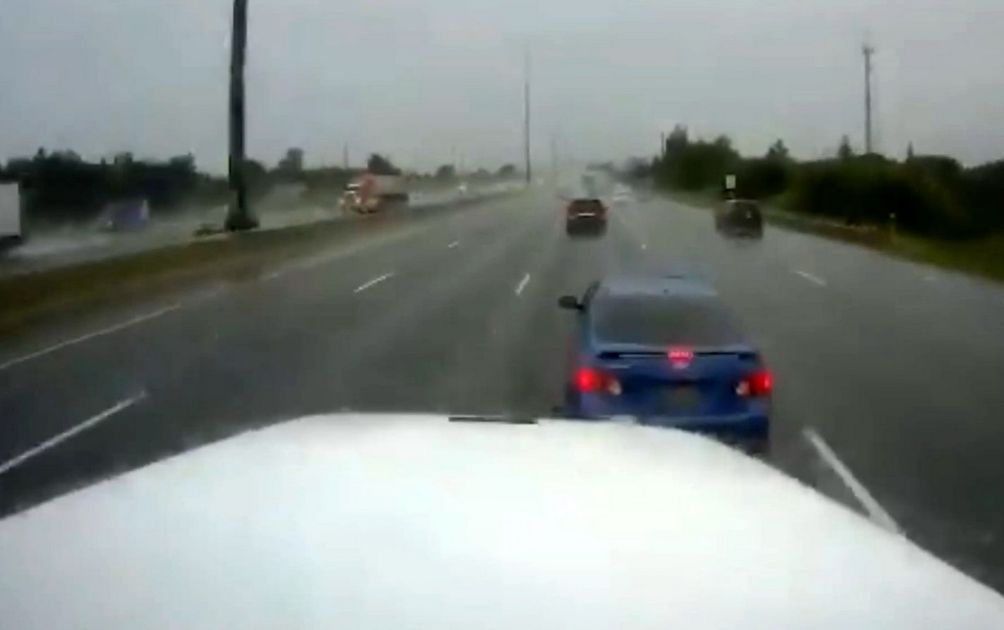 Never, even in my wildest dreams, would I pull in front of a truck at highway speeds and hit the brakes, but apparently that’s becoming a thing. Dash cam footage reveals that car drivers like to play chicken big trucks. This story is about one incident that didn’t end well for the four-wheeler or the truck driver.

In late July, the Ontario Provincial Police posted a video clip (below) of just such a game of chicken to its Twitter feed. A blue Toyota Corolla passes a truck, pulls in front of the truck, and then applies the brakes. The truck avoids hitting the car but winds up jackknifing and careening into the Jersey barrier. The incident took out two tractor-trailers and four other cars. It tied up traffic for hours, but the blue Toyota skated away unscathed.

Don’t cut in front of vehicles! This is what can happen when you take away a truck drivers following distance.
6 vehicles involved, #Hwy401 shut down and restricted for hours during clean up and investigation. Vehicle has been identified, investigation ongoing, charges pending. pic.twitter.com/aRPmcMwiMV

Until the cops caught up with it. The driver was apprehended and charged with dangerous driving – a pretty light price to pay for all the damage done.

First of all, hooray for dash-cams. Without the video evidence, that Toyota driver would have got off scot free. I remember back in my driving days the insurance companies would say, “make sure you get a piece of it,” implying that to have a few scraps of paint or fur or whatever caused the mishap would at least prove someone or something else was involved.

Dash-cams provide much better evidence, so I’m all for them. But there are some larger issues here that need to come to the fore.

First, as the prevalence of adaptive cruise control and automatic emergency braking systems increases, more and more truck drivers are going to lose control of these situations.

And second, why did the truck in the video jackknife and wind up smeared along the Jersey barrier?

The video clip above clearly shows a small white car interfering with the progress of a tractor-trailer, going as far as changing lanes to stay in front of the truck as it attempts to maneuver around the car. Early in the clip we see the car pull in front of the truck eliminating it’s space cushion. The truck flips on the turn signal and pulls into the right lane, whereupon the car also veers back into the right lane and applies its brakes (you can see the car’s brake lights on at the 14-second mark). The car filming the incident then passes this confrontation at a significant speed differential suggesting the white car had succeeded in drastically slowing the truck.

These shenanigans happen every day. The drivers obviously have great trust in the drivers’ ability to stop, but I’ll bet that most car drivers aren’t even aware of the automatic braking function now baked into many newer trucks. Once cars figure out that trucks have automatic braking and collision mitigation, I bet we’ll see a lot more such incidents, or even instances where the car slows right down to bring the truck to a crawl. Because the braking is automatic, there will be nothing truck drivers can do to avoid those situations.

There are cargo theft implications here too. If you want to get a truck stopped, just pull in front of it and slow down. Once you have it stopped, yank off the trailer service line and you have captured yourself a tractor-trailer load of something valuable.

I think there needs to be an over-ride switch included with any automated driving system; some way for the driver to retake control of a system designed with the best intentions that’s being used improperly or is simply misreading the situation.

As the OPP video demonstrates, a hard brake application on wet pavement produced undesirable results. Imagine that same scenario on a snowy or icy road.

Where’s the ABS When You Need It?

Now to my second point: why did the truck jackknife? I thought ABS was supposed to prevent that from happening. Or maybe the ABS on that truck wasn’t working. I’ll never know because the police don’t release such details to the media.

If the ABS was functional, maybe the drive tires were nearly bald and bereft of traction. Later in the crash sequence you can see the trailer is where it was supposed to be, so its ABS appears to have been working.

I have attended a couple skid-schools in my time. One was called the Michigan Center for Decision Driving. It was held on the skid-pad at Eaton’s test center near Kalamazoo back in the 1990s. The one lesson I learned from those experiences is that you are further ahead to avoid jackknifing because if its a tractor jackknife, it’s impossible to recover from. It happens too fast.

Sometimes you can maneuver out of a trailer jackknife if you release the brakes and get the wheels rolling again (it will straighten out), but since you applied the brakes for a reason, releasing them might be contrary to the original objective.

We’ll probably will never know why the truck in the video jackknifed, but I can’t help wondering how many other similar incidents may arise from hard automated brake applications on trucks with non-functioning ABS, faulty brakes that won’t release quickly enough or crappy tires.

And then we have the question of how drivers might react at such a moment. I think the driver following the blue Toyota reacted appropriately (if maybe a little slowly) by hitting the brakes, but he or she may have over-reacted and caused the truck to jackknife. The dash-cam was on the passenger side of the truck, so we could not see what the driver saw. If the car dipped below the hood line and out of the driver’s line of sight a hard brake application would be perfectly appropriate.

You can see how fast that brake application turned into a jackknife. It’s nigh-on impossible to recover from such a skid, so that driver was doomed from the moment his boot hit the brake pedal.

Do driving schools still teach the practice of rapidly applying and releasing the brakes now that we have ABS? That’s what ABS does, but it can do it much faster than a human can – when it’s working. But still, everything from the brake pedal to the ABS microprocessor and the hapless sod who cut off the truck in the first place depends on a properly functioning foundation brake system.

I don’t know how much we can do to prepare drivers for moments like we see in the OPP’s video. That looked quite deliberate to me and there certainly wasn’t time for the truck driver to back out of it and deescalate the situation. In the case of a developing road-rage incident, obviously backing away and deescalating in the thing to do, but if the other driver persists, truck drivers could be left standing still in the middle of a freeway.

I know advanced braking technology is all about safety, but it can also create some unsafe situations when the driver has no control over the truck.

Scania Winter 2023 #shorts
Scania S730T
These Are the LEAST (and MOST Safe) New Trucks You Can Buy Today!
The 2021 Ford F-150 Is So Stuffed With New Tech & Gadgets That Even Tesla Owners Are Impressed!
The New VW California Is The Coolest Van You Can’t Buy & Here’s Why!