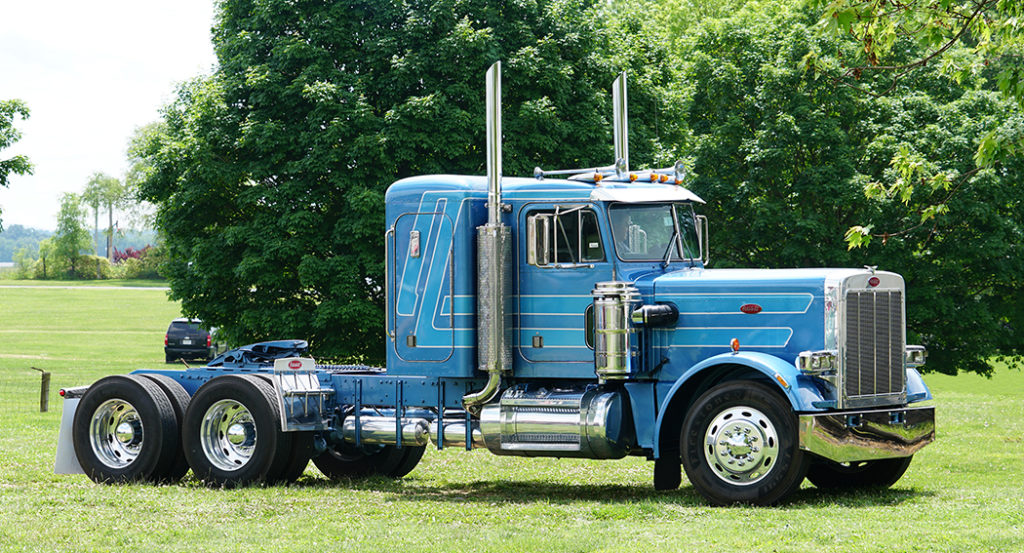 After missing a year for a reason none of us want to talk about anymore, the American Truck Historical Society (ATHS) resumed their annual national convention this year on June 3-5, 2021, at the Rockingham County Fairgrounds in Harrisonburg, VA.  For those who’ve been to Virginia, specifically that area, you know the beauty that surrounds, and this year, it included seeing beautiful old trucks for days.

I first became mildly acquainted with the national convention by word of mouth in 2017 and decided to see what it was all about at the 2018 convention in Lexington, KY.  I was amazed at all the trucks.  There was literally something for every kind of commercial truck lover or enthusiast in attendance to enjoy.  I also really enjoyed all the people I met there, especially the ones willing to explain details about their trucks.  But, of course, what I loved most was the trucks.

This year saw a bit of a dip in the number of trucks versus the last national show held in Reno back in 2019, but that might have a lot more to do with where the show was held, as far as where the trucks are located, than anything else.  Also, things have not totally rebounded to “normal” from the pandemic.

Driving from Georgia, up through North Carolina and into Virginia, the views were amazing.  The traffic along the way, however, was not.  I arrived on Monday, June 31, to get acquainted with the grounds and be prepared to be there as trucks started coming in.  I’ve learned it is good to be early, because it gives a great opportunity to get excellent photos of the trucks when first coming in.

This event marked the 50th year for the ATHS, so to celebrate each truck entered received a special wood block with a plaque denoting this milestone.  For this year’s show, the host chapter was the Shenandoah Valley Chapter.  This was a nice venue however more dust control was probably needed.

Plenty of vendors were on-site and set up, including our very own Eric Hill with the 10-4 Magazine booth, RoadWorks Manufacturing, who were on display outside with their “Night Moves” 389 Peterbilt, Dynaflex Products, Hot Rig Apparel and more.  A crowd favorite seemed to have been The Old-Fashioned Kettle Korn Company stand, which had the best popcorn ever.  Too bad they don’t ship, otherwise I would have been ordering a bunch of this stuff.  Food was plentiful with a few different options, including one that offered breakfast, and most everyone’s favorite, coffee.

Coming back live after a year off was definitely a happy sight for show-goers, but ATHS offered a virtual show, as well.  The virtual show allowed people who couldn’t attend in person to still enjoy the show and every truck that was there.  Let me tell you, virtual is fine, but “live and in person” is way better!

Every year, the convention is host to expert speakers and area tours or activities.  This year was no different.  There were several speakers who gave presentations on Axalta Paint Coating Systems, the History of Cummins and Harrisonburg Motor Express, Trucking in the Shenandoah Valley, and much more.  The ATHS also offered folks the chance to go on a Patsy Cline Day Tour in and around Winchester, VA, a tour of Thomas Jefferson’s Monticello, and Luray Caverns in Luray, VA.  These little day adventures gave many people the opportunity to explore the area when they may not otherwise have been able to.  I’ve never gone on one of the tours, which include lunch, but I plan to try it out at one of these future shows.

Neat old trucks in attendance were plentiful including trucks from Sercombe Trucking out of Jackson, MI, Wayne Ellis with his 1998 Kenworth W900 and 1984 Mack R688ST, Jeff Miller with his amazing Needlenose Peterbilt, and the Cunningham Bros. Hay Co. out of Santa Rosa, CA with their beautiful orange and white cabovers.  Others were Dill McKinney of McKinney and Sons Transfer out of Lexington, AL and his “Lucille” 379 Pete, Chad Johnson out of Mooresville, NC with his Freightliner FLC, Andy Stewart with his Autocar, Chris Russell out of Delaware, who brought in two of his trucks, which he drove (including his 1987 Peterbilt 359), and Curt Earhart, who drove in his 1994 Peterbilt 379.  It was nice to see longtime friends at the show, as well, including Chris Fiffie from Big Rig Videos, Dill McKinney’s parents David and Connie, and JC and Debbie Alt, who, along with Eric Hill and the RoadWorks crew, we had the opportunity to enjoy a gathering for a nice dinner together.

The Keystone Truck and Tractor Museum out of Colonial Heights, VA came to the show with a display of 12 of the trucks from their museum, as well as being joined by some of their friends.  This group of trucks definitely did not disappoint and was the perfect teaser to make people want to come and visit their museum.  All the equipment was pristine, but my favorite was their 1986 Peterbilt 359 with the 3408 CAT V8 engine.

The weather was very warm but great all week and, as most know, there never seems to be enough days to see all the trucks at these huge annual national conventions.  There were plenty of trucks I liked, but my favorite truck was a teal and white Peterbilt 359 owned by Jesse Franks out of Jackson, New Jersey.  This truck was beautiful, but the only bad part was that once some of the parking lots got filled up, the combinations became a bit cramped in one of the gravel parking lots, not making it so easy for people like me to take photos.

As with each convention I attend, I am never disappointed by the trucks or the people.  My favorite time looking at the trucks probably had to be at sunrise, that Saturday morning, when no one was stirring yet.  I think I even managed to get photos of almost every truck in attendance, although some left early, and some trucks came in late.  Getting a glimpse of trucking’s past and imagining how they looked back then, running the interstate or those two-lane back roads, is just so dang cool.  I’m already looking forward to the show next year.

All said and done, nearly 700 trucks participated and around 6,000 attendees came through the fairgrounds.  If you have never attended one of these ATHS National Conventions and Antique Truck Shows, mark your calendar for the 2022 show, being held June 9-11, at the Illinois State Fairgrounds in Springfield, MO, and check out some amazing older trucks that seem to stretch out for days.  As always, to all the drivers out there doing the deal, truck safe.