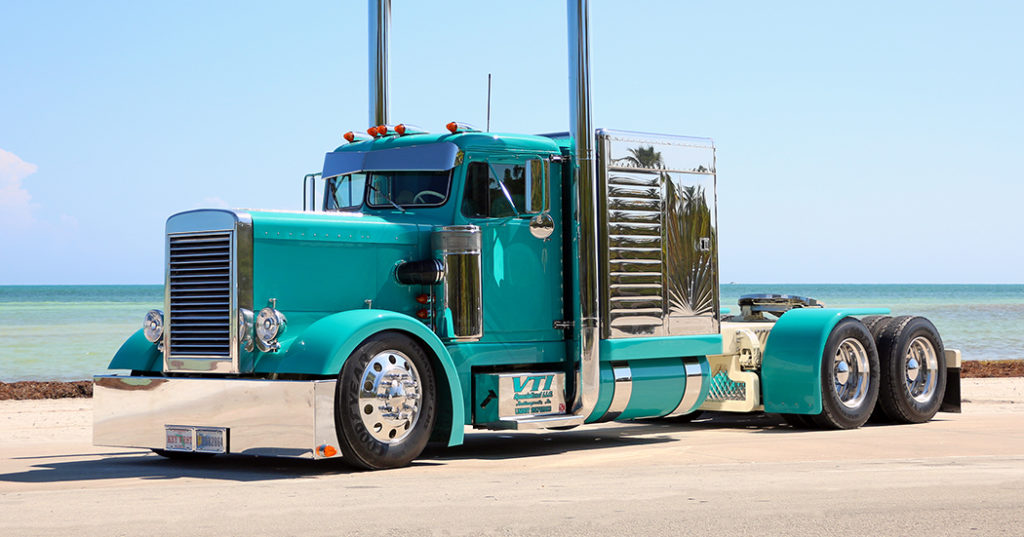 Some trucks are low key, and some are wild rides – this one happens to be both!  When someone decides to restore or customize their truck, it can be as mild as a few bolt-on pieces or a compete frame-off build.  Several factors determine the complexity or direction in order to appease the owner’s vision.  For Bob Vogel of Indianapolis, IN, when he set his sights on the well-known 1956 Peterbilt Needlenose that had been sitting in Heartland Peterbilt’s showroom for 30 years, he had no idea it would turn into the final product you see today… at first.

With a fondness of the older generation of trucks, Bob (48) grew up in the transportation industry and bought his first truck at 19 years old in 1992 from a longtime family friend – a 1964 B Model Mack – for only $4,500 and used it to pull a dump trailer.  In 1993, Bob, along with his father, started Vogel Trucking.  In 2008 the two decided to sell the company when Bob’s dad retired.  Building the business to 75 trucks, Bob always had it in his mind that he could do that again.  After a few years working as an agent at another carrier, Bob started his own company in 2010 called VTI Specialized.  Just eleven years later, VTI has grown to 130 trucks, along with a full shop and office team, and become one of the Midwest’s largest flatbed, walking floor, dump truck and specialized carrier operations.

Never forgetting where and how he got started, Bob has built a nice collection of older nostalgic trucks.  One of these trucks is a 1957 B Model Mack that reminds Bob of his first truck (he is currently working on getting back the actual truck that he bought when he was 19).  Bob also has a 1986 GMC General and Mack cabover, both of which are fully restored and mildly customized, and taken to truck shows regularly.  Other trucks in his collection include a 1970 and 1971 GMC 9500 short and long hood, along with an International 4670 cabover.  All these rigs are great pieces, as well.  Bob also has a 1991 Peterbilt 379 that he has big plans for eventually.  Still not sure the direction to go with the 379, Bob smiles and says that it shouldn’t be a project that is too involved or too wild, but by the way he laughs when he says that we’ll just have to wait and see what he rolls out.

The prize jewel to this great collection is the 1956 Peterbilt 351 Needlenose gracing the pages before you now (and this month’s centerfold and cover).  Although unrecognizable in its current condition, this is the same truck that sat in the showroom owned by Tony Griffith of Heartland Peterbilt in Effingham, IL for 30 years.  After speaking with Tony, Bob drove to Effingham with only one thing on his mind.  After a brief walk around, Bob knew that Needlenose had to be his.  Nobody at Heartland could believe it when Bob said he wanted to drive the truck back home that day!  Proud to not trailer any of his trucks, Bob asked the service manager if they could get the old Peterbilt road worthy enough to make it the 150-mile trip back to Indy.  After an oil change, battery swap, grease, and lots more grease, Bob was rolling.  Running on at least 30-year-old tires, brakes, steering and everything else, cruising across Interstate 70 eastbound, Bob got the truck to its new home at VTI safely.

After a few weeks, Bob delivered the truck to Dustin Dickerson of Dickerson Custom Trucks just north of Indy in Thorntown, IN.  The plan, at first, was simple: give the truck new paint, a new interior, and go through the electrical, making it a solid truck to get out for cruising from time to time.  Typical to all builds of a truck of this age, more and more questions and issues developed as each layer of this Needlenose “onion” was peeled back.  Opting for a longer wheelbase, upgraded wheel hubs and air ride, Bob and Dustin decided to use a newer model chassis from a donor Peterbilt.  This provided the much-needed foundation and quickly bypassed a lot of extra work that would have been required on the original frame – and immediately gave Bob the 260-inch wheelbase he desired.

As Dustin and his team began dismantling the truck to switch over to the new chassis, paint colors were tossed around.  Bob, who likes the retro turquoise and off-white of the tri-five Chevy era, made the choice.  Also, liking to name his projects, Dustin posed the question to Bob, asking what he might like to call this truck, so Bob and his wife Carrie chose “Low Key” in honor of their favorite vacationing spot, which just happens to be the Lower Keys of Florida, as a fitting name for this ‘56 hot rod rig.

After smoothing the frame and all the other body panels of any imperfections, the paint booth was ready to accept the cab, fuel tanks and hood panels, along with the engine, frame and driveline.  Before the engine could be sprayed, the guys decided to rebuild the original 220 Cummins and add a turbo, which boosted the horsepower to 262, and then backed it with a 5+3 twin stick setup.  Also being painted was the hand-built deck plate, housing the air quick connects and light receptacle, along with the front and rear light filler panels, which were later backed by quilted stainless accent pieces, giving this truck a unique period-correct feeling and look in a cool new school custom application.

Along with the turquoise frame and body panels, the hand fabricated driveline cover was painted off-white.  Not a typical custom feature on big trucks, this modification is not even seen unless you get on your knees and look under the rear frame rails.  It’s an impressive touch that is not only aesthetically pleasing but functionally completes the frame and deck plate area to be completely covered.  Protecting those rear frame rails are the long drop half fenders by Hogebuilt, painted the same turquoise to match the body.  Sitting high atop those protected and covered rails also sits an all-aluminum Holland fifth wheel mounted permanently in place.  The talented Rick Sanders was called in to pinstripe the rig, adding the right lines and curves, dragging his bristles on the engine, deck plate and overhead console, as well as accents on the truck’s doors, under the chromed vintage twist handles.

While the paint was still drying, discussions began about the sleeper.  After an extensive evaluation, Dustin felt the Mercury sleeper would need to be re-skinned.  Before giving the okay, Bob took to the net and searched until finding a newer Mercury that would save Dustin on the skinning labor and time.  Knowing that the new sleeper was going to be a direct bolt on, Dustin’s guys fabricated rear light bars for added style.  Stainless boxes, polished to a mirror shine, hold three watermelon LED lights, placed on each rear corner, just above the custom fabricated and painted bunk drop panels.  While waiting on the sleeper to arrive, Lincoln Chrome shipped the 8-inch stacks and front bumper to Thorntown to meet the ‘56.  This time was also used to make the custom visor, since 1956 model drop visors are, not surprisingly, not typically in stock at chrome supply companies.

Even though the turquoise is eye catching, the main attraction lies between the doors inside the cab.  Completely brand new, no inch of the interior was untouched.  The overhead console housing the CB radio and stereo was painted in the off-white color to match the exterior, with hot rod inspired pinstriping, as well.  Aftermarket air conditioning keeps Bob and Carrie cruising cool while riding in the custom captain’s seats topped with the “Low Key” logo stitched into the headrests by local upholsterer Scott Gibbs of Indianapolis.  The polished aluminum tilt steering column is topped by a new three-spoke Retro steering wheel from Steering Creations, and the smooth dash holds handmade wood inserts to bring in the Florida Key vibe and house custom gauges with “Low Key” imprinted on the faces.  The stainless panel for the switches is laser engraved and looks absolutely perfect.  To avoid a cluttered dash, Dustin relocated the tractor and trailer brake valves to the floor beside the driver seat and cab wall.

Choosing something special and symbolic for the cab floor, Bob wanted to pay homage to the Florida Keys and really show the theme base of this build.  The true centerpiece of the entire truck, in my opinion, is the aerial photo of the Seven Mile Bridge printed on the floor, splitting the twin sticks, with the beautiful crystal-clear turquoise waters flanking each side.  This unique floor is the ultimate cherry on top of this beautiful build, and truly sets it apart from the rest.

The final detail is not a big booming sound system, but rather a unique digital LED lighting system by Boogey Lights, which requires three remotes to control the thousands of lights inside, out, under and around every section of the truck, providing an incredible light show, reminiscent of the famous night life of Duval Street in Key West.  Along with the accent lighting, another really trick feature is the headlights.  Starting out with Grand General headlamps, Dustin baked them in his oven to pop out the lenses.  From there he built the projector beams which give Bob the proper visual aid he needs when driving, and then added a cool halo glow circle for when parked, for that “low key” chill feel.

Making its debut at the 75 Chrome Shop show in Wildwood, Florida (a fitting location), this truck was very popular and always had a huge crowd around it.  Not missing any details, Dustin even wired the “brag board” sign lighting to the truck’s lighting system, so it all matched and worked together!  After the show, I (along with my girlfriend Amanda) spent a week with Bob and Carrie down in the Keys taking pictures and making memories.  It was truly a week we will never forget.  Thank you, Bob, for allowing us to hang out with you and some of your friends and document the entire week with photographs.

You can look this truck over for hours, and it just keeps getting more impressive, as you see more.  This ‘56 Needlenose is a true treasure and resurrection of a once sitting 30-year truck.  No matter how simple Bob’s original plans were for this build, whoever has had the pleasure of seeing “Low Key” in person can all agree in thanking you for throwing simple out the window and creating this absolutely stunning truck.  And the icing on the cake – Bob Vogel is a “Low Key” person, too, so the name works for both the truck and its laid-back owner!  Perfect!!

The 2021 Ford F-150 Is So Stuffed With New Tech & Gadgets That Even Tesla Owners Are Impressed!
Scania S730T
Uittocht Truckstar Festival – G.W. Trans – Scania V8 R500
V8power by night – Scania R580
Ford vs GM vs Ram: Who Did The Best Job Re-inventing the Tailgate? We Test & Rank Them!