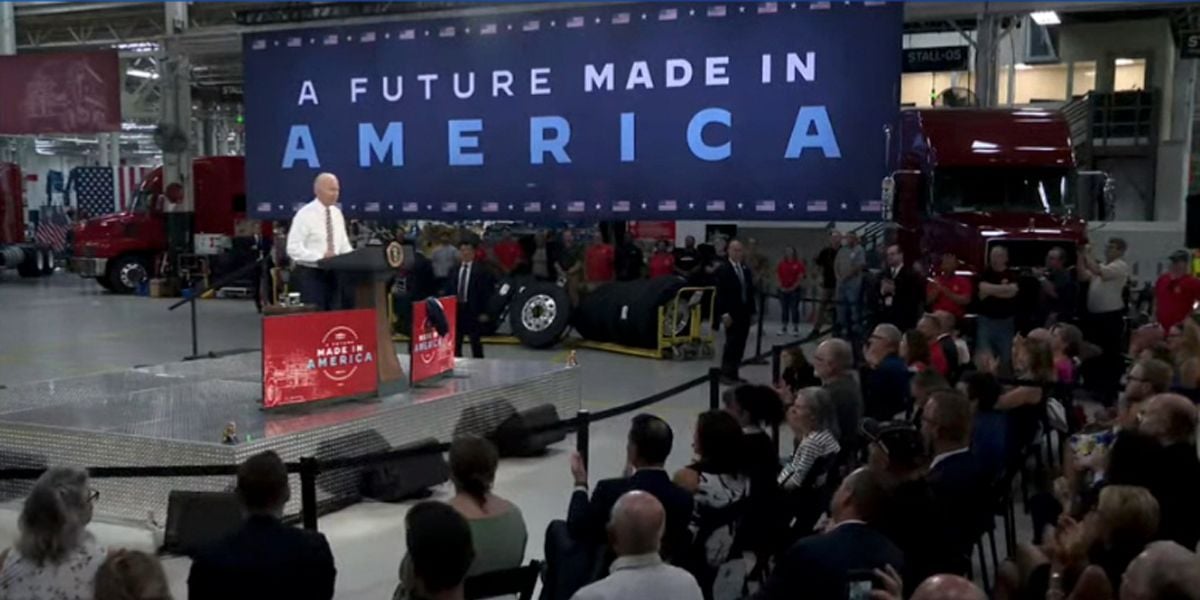 Biden said the administration is making the biggest enforcement changes to the Buy American Act in 70 years in order to ensure that “loopholes” that allow the government to issue too many exceptions, or call for too little oversight, are closed. That includes raising the thresshold of the percentage of U.S.-made parts that must be included to be considered “American made” for government contracts.

The Buy American Act is supposed to make sure the government spends tax dollars on buying goods that were built and purchased in America. When there are no U.S.-based companies that produce certain goods (including components for motor vehicles), the government can issue a waiver to purchase those goods outside of America, often from companies that have subsidiaries oversees. Those waivers have resulted in tens of billions of dollars that didn’t go to jobs and businesses and communities in the U.S., Biden explained.

“Buy American has become a hollow promise,” he said.

#BuyAmerican comments from the president during remarks at @MackTrucks. https://t.co/DQyQYdjU6o

In order to make Buy America more successful, Biden said he is “putting the weight of the federal government behind that commitment.” In the White House, a Made in America office has been created to oversee these efforts.

“My first cabinet meeting, I told all the cabinet members: if their agency wants to issue a waiver … they’ve got to tell the White House specifically why they want an exception,” he said.

Furthermore, they have to publicly post the request for whatever component or good they can’t find so that American manufacturers all over the United States and businesses have a chance to look up what the government is searching for and over their products.

The federal government owns about 600,000 vehicles, and the Buy America Act calls for replacement of those vehicles to be “substantially” made in America. Today, “substantially” means 55%, according to Biden.

Biden says this is too low, and said he is directing his budget office to write rules to require those vehicles be 75% made in America.

The message from @POTUS Biden at @MackTrucks: Announcing “biggest change to enforcement of Buy America Act in 70 years.” He is directing budget office to write new rules, including raising requirement of domestic content to be considered “Made in America” from current 55% to 75%. pic.twitter.com/NkxwQwpxx3

Second, he said he’s going to ensure that contractors must disclose the total domestic content of their products. Right now, he said, no one is checking.

But, “they got a new sheriff in town,” Biden said. “We’re going to be checking.”

“Instead of taking contractors at their word that they hit the threshold, we’re going to start making them give us the details so that we can do more to support American manufacturing,” Biden said.

Fixing the Parts and Component Shortage

To ensure Americans aren’t “held hostage” by the shortage of critical parts and components, like computer chips, Biden also said he got together with a group of 20 lawmakers to pass a new piece of legislation providing that South Korea and Taiwan open up plants here in the United States and hire Americans.

“I’m directing my budget office to create new rules on critical products, where we know we need stronger, more resilient domestic supply chains,” he said. This includes products such as semiconductors and advanced batteries.

“You see production slowed down, you’ve had your hours cut because of the shortage in computer chips and semiconductors,” Biden said, addressing the audience at the Mack Trucks plant. “These chips are more than just vehicles. They enable so much of our modern life — our smartphones, our televisions, our medical equipment. That’s why we will be investing $50 billion to have the best chip manufacturing in the world come and build factories in the United States of America.” The bill is part of the Build Back Better plan.

“If American companies know that we’re going to be buying from them, they’re going to be more inclined to hire and make key investments in the future in their companies, like you’re doing here [at Mack Trucks],” Biden said.

Biden’s Build Back Better plan also calls for incentives for electric vehicle adoption and for increasing the amount of clean energy the U.S. government buys.

He added: “I just saw the work [Mack Trucks is] doing in the heavy-duty electric vehicles here, like electric garbage trucks,” referring to the Mack LR Electric.

“You know, there are more than 600,000 vehicles in the federal fleet, including a majority of the largest portion of which are at the post office. As we work to electrify them … we’re going to be making a market for [electric] vehicles, supporting both good jobs being created, as well as innovation we need to electrify our transportation sector, and clean up our environment.”