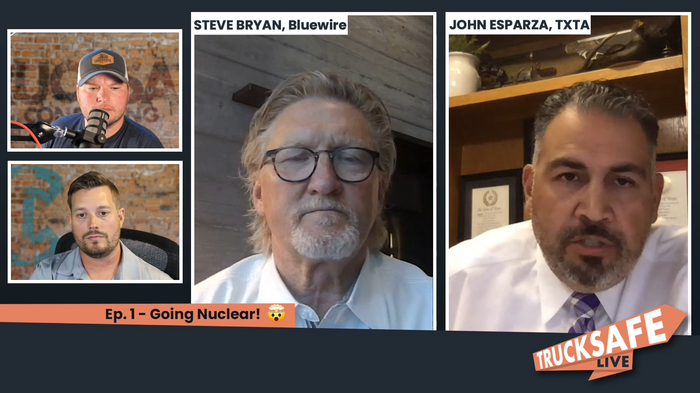 Your trucking company has been sued in the wake of a fatal accident. You endure an eight-hour deposition trying to defend it — and not one question is about the accident itself.

That’s what happened to an exec at one well-known trucking fleet. And that is the state of affairs today in the vast business of accident attorneys targeting trucking.

I did an internet search for trucking accident lawyer and there were more than 10 million results. Page after page of results with titles such as “Truck Accident Lawyer in Los Angeles” and “Trucking Company Liability.”

A few years ago, a family member wanted to file a medical malpractice suit. But we couldn’t find an attorney interested in taking the case. One told us, off the record, that it would go nowhere. Tort reform and other changes had made it much harder to sue medical professionals and win. Who were those lawyers going after now? You guessed it — trucking companies.

‘Nuclear Verdicts’ and the Trucking Industry

So-called “nuclear verdicts” against motor carriers have risen dramatically over the past 15 years, according to the American Transportation Research Institute. In an analysis it published last year, it found that in 2004, there were just four reported cases in which a verdict exceeded $1 million against a trucking company. In 2013, that number had jumped to more than 70.

Although the total number of multi-million-dollar verdicts fell slightly since then, the average dollar amount continues to skyrocket — surpassing $22.2 million in 2018, a 10-fold increase from the $2.3 million average in 2010.

The concern in the industry was evident in ATRI’s 2020 Top Industry Issues report, where insurance availability and cost (driven up partially by the increase in litigation) as well as tort reform made the top 10.

But the trucking industry has been taking steps to fight back, and those were highlighted in the debut of Trucksafe Transportation Consulting’s new Trucksafe Live monthly program.

The episode featured Steve Bryan, co-founder of the start-up Bluewire and previous founder and CEO of motor carrier safety scoring firm Vigillo, as well as John Esparza, head of the Texas Trucking Association, which this year had some success in the state legislature with a tort reform bill.

Esparza and Bryan, alongside Trucksafe’s Brandon Wiseman and Jerad Childress, spoke about the current state of nuclear verdict awards, how the industry became so susceptible to these types of judgments, and what fleets can do.

Bryan gave an overview of Bluewire, a new company that believes it can use data analysis to help fleets disarm nuclear verdicts before an accident even happens. Data is key to helping companies improve their reputation, he said. Some of the data that affects a carrier’s reputation include areas such as Federal Motor Carrier Safety Administration safety and crash data, driver background checks, telematics, in-cab cameras, vehicle maintenance, CSA scores, driver training, and even text-based factors such as how fleets recruit drivers and how they are portrayed on social media.

As one of its first steps in gathering data, Bluewire this summer put out an anonymous survey, which Bryan described as a self-inventory for fleets of the various attack vectors that they may be vulnerable to. think of it as a self-inventory of those attack vectors. One of the interesting things the survey has found, he said, is how widespread the concern is, as evidenced by answers to one of the survey questions about the respondents’ role in the company.

“This is one of the reasons we know this is such a huge issue,” he explained. “It’s an absolute rainbow of responses. This issue cuts across the whole organization. Not just the safety department or the insurance people. It’s a huge problem for every person involved in trucking.”

Another eye-opener, he said, was the difference in how well respondents felt they were prepared for a lawsuit (in a question asking respondents to rate how well the company was prepared on a scale of one to 10), compared to the actual information they provided about the potentially vulnerable areas of their company.

“Let’s just say we think there may be a bit of overconfidence.”

Taking it to the State House

Esparza spoke about a new Texas law that goes into effect on Sept. 1, modifying state law to provide a framework for trial procedures, the use of evidence, and the determination of liability in certain civil actions involving commercial motor vehicles.

TXTA was heavily involved in working with legislators to get this bill passed to address what it called abuse by plaintiffs’ attorneys.

At issue is what has become known as the “reptile theory,” the strategy of unlocking the jury’s “reptilian brain,” triggering the primitive part of their mind and appealing to their emotions instead of using logic and applying the law to the facts of the case.

“Plaintiffs’ attorneys were abusing the process to bias juries against motor carrier,” Esparza explained. The new law “essentially codified a well-established law of negligence,” he said.

“What they’ve been doing [that the new law addressed] is allowing the jury access to information you would normally establish in the second phase,” Esparza said. “For people who are truly injured, this protects them. This is purely about seeking millions of dollars that are not the fault of the plaintiff.”

“This is really about leveling the scales of justice.”

Key to the association’s success, he said, was using data. “One of my favorite legislators, there’s a sign on his wall that says, ‘In God we trust. Everyone else, bring data.”

The association used a state crash data database that goes back more than a dozen years to show that tractor-trailers were involved in fatal crashes only 14% of the time — and that law enforcement assigned responsibility to the truck driver only 4% of the time.

However, Esparza said, the association’s win shouldn’t be considered a knockout.

“We have to stay a step ahead – what will they look to abuse next? The financing of some of these companies, who stands to profit from a nuclear verdict? That’s something we need to look into.”

He was referring to third-party litigation funding, which allows hedge funds and other financiers to invest in lawsuits in exchange for a percentage of any settlement or judgment. While this may help victims mount lawsuits that otherwise might not be able to, there are concerns about the ethics of it, especially when juries have no idea this is happening.

The U.S. Chamber of Commerce calls third-party litigation funding “a multibillion-dollar global industry that is turning our courtrooms into casinos.”

Trucksafe’s Wiseman commented that a possible way to mitigate this trend would be to require some type of disclosure at the state level as there is in many federal courts about who stands to benefit from a verdict.

“I think it’s a very logical solution,” Esparza said. “If plaintiffs are seeking damages above the minimum liability insurance amount of $750,000, shouldn’t we have access to a federal courtroom? The rules are a little different; they are a little more intolerant of the abuse we’re seeing today.”

The American Property Casualty Insurance Association earlier this summer commended the U.S. District Court for the District of New Jersey for adopting a rule to require parties involved in litigation to disclose information and financial interest of non-parties, and called on more federal courts as well as states to adopt similar “common-sense reforms.”

“Allowing investors to turn the civil justice system into a profit-centered commodities market is egregious,” said APCI President and CEO David Sampson in a statement. “Third-party litigation financing is surging, with more than $13 billion of capital invested globally. This should concern everyone, particularly where that financing occurs away from public view and oversight, designed with rate of return in mind rather than justice and fairness.”

However, that’s going to take time. In the meantime, concluded the Trucksafe attorneys, trucking companies need to do everything they can to shore up any gaps in their defense. Fleets should do regular self-examinations, such as mock DOT audits, to discover those gaps.

Esparza summed it up this way: “Trouble rides a fast horse…. We need a faster horse.”