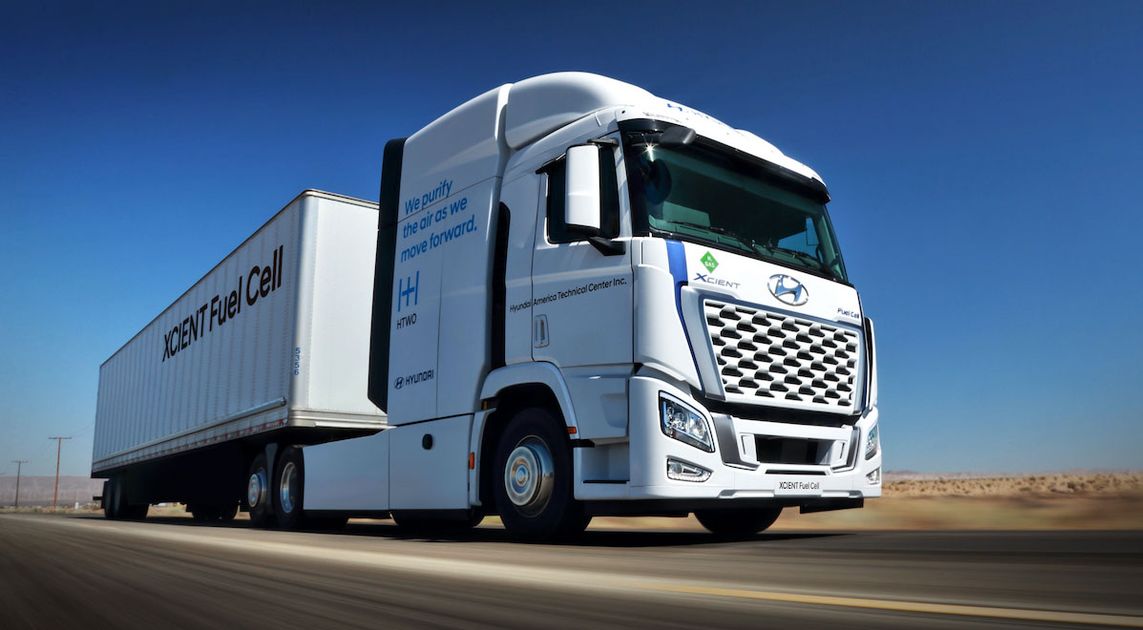 Hyundai is bringing more than 30 of its hydrogen fuel-cell electric heavy-duty trucks to California as part of two publicly funded demonstration projects, which it says will be the largest deployment of Class 8 hydrogen-powered fuel cell trucks in the country.

The demo trucks will be based on Hyundai’s Xcient Fuel Cell truck, which the company claims is the world’s first mass-produced, heavy-duty truck powered by hydrogen. They are scheduled to be deployed starting in the second quarter of 2023.

Debuting last year in Switzerland, Xcient Fuel Cell trucks have racked up a million kilometers of driving in real-world conditions, according to the company. The U.S. model provides a maximum driving range of 500 miles.

Hyundai will use insights gained from these public projects to develop its zero-emission commercial fleet business in the U.S.

A consortium led by the Center for Transportation and the Environment and Hyundai Motor recently won $22 million in grants from the California Air Resources Board and the California Energy Commission and $7 million in additional grants from the Alameda County Transportation Commission and the Bay Area Air Quality Management District in support of this project.

CTE began developing the NorCAL ZERO project more than two years ago with the idea of collaborating with the East Bay Municipal Utility District to site a hydrogen fueling station adjacent to the Port of Oakland to fuel Class 8 FCETs.

Glovis America, a logistics service provider, will be the fleet operator of these trucks. Macquarie’s Specialized and Asset Finance business, part of its Commodities and Global Markets division, will finance the trucks through a lease to the operator.

The new FCETs will provide Glovis with a total cost of ownership over six years that is nearly equivalent to the ownership cost of Glovis’ diesel trucks, according to a news release from CTE, with cost savings thereafter.

With support from the City of Oakland and the Port of Oakland, these trucks will service the entire northern California region.

The consortium also plans to establish a high-capacity hydrogen refueling station in Oakland, California, with hydrogen fuel provided by Air Liquide. The hydrogen station will support up to 50 trucks and back-to-back fueling. NorCAL Kenworth, based in San Leandro, will be responsible for maintaining and servicing the trucks and will be upgrading its maintenance facility with hydrogen detection and ventilation equipment.

Hyundai and its fleet partner plan to begin operating these trucks next month. They will be used for long-haul freight operations between warehouses in southern California for a 12-month period.

Hyundai will also work with First Element Fuel to use three hydrogen refueling stations in the region to refuel the trucks.

In 2020, Hyundai announced its plan to deliver 1,600 Xcient Fuel Cell trucks to Europe by 2025. The first 46 units were delivered to Switzerland last year.

The trucks deployed in California will have a larger maximum driving range than their European counterparts — 500 miles — because the hydrogen will be stored in greater quantity on the vehicle in tanks rated at 700 bar, or about 10,000 psi, of pressure. On a single fill of hydrogen, the trucks can run from Oakland to Sacramento, Stockton, Modesto, or as far south as Fresno.

The maximum gross combination weight will be about 82,000 pounds.

Based on the experience gathered from the initial demonstrations, Hyundai will accelerate its effort to officially launch its zero-emission commercial trucks in North America. Hyundai said it is already in talks with multiple logistics and commercial companies that are interested in leveraging hydrogen technology for their freight delivery and drayage services in the U.S.