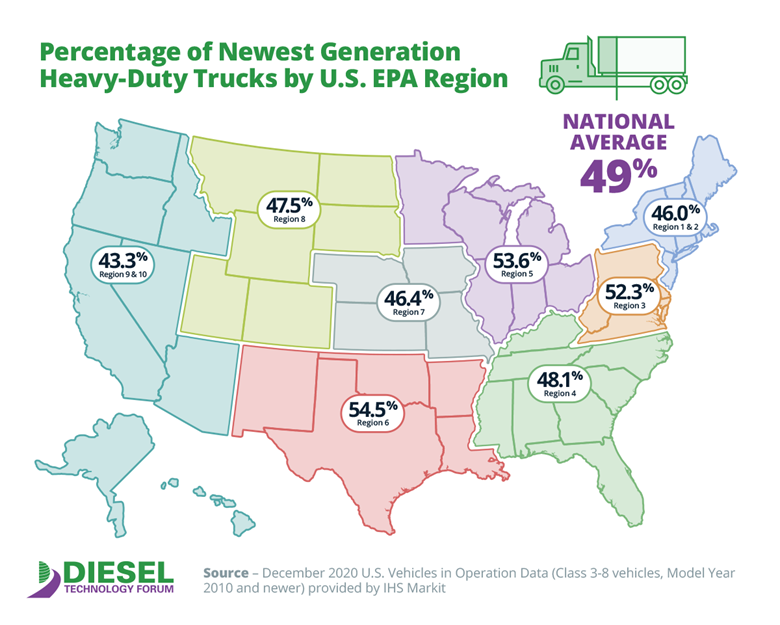 Nearly half the commercial trucks operating in EPA Regions 9 and 10 are now powered by the newest-generation of Near-Zero Emissions diesel engines, according to Diesel Technology Forum ‘s analysis of 2020 U.S. vehicles in operation data (Class 3-8) provided by IHS Markit.

Those two EPA regions take in the entire Southwest and Northwest as well as Hawaii and Alaska. Now standing at exactly 43.3%, the share of new technology diesel trucks in the regions expanded by 6.6% between July 2019 and December 2020.

Diesel Technology Forum pointed out that beginning in 2010, all new heavy-duty trucks have been equipped with selective catalytic reduction (SCR) and particulate control technologies. DTF said these combine to achieve stringent Environmental Protection Agency emissions requirements for nitrogen oxide (NOx) emissions of no more than 0.20 grams per brake horsepower hour (g/BHP-hr).  This is in addition to particulate matter (PM) emissions levels of no more than 0.01 g/BHP-hr.

Nationwide, the newest, cleanest, near-zero-emissions diesel truck technologies now make up almost half of the more than 11 million diesel-powered commercial vehicles on U.S. roads, per the DTF analysis.

DTF also noted that by 2030, thanks to the continued increase of newest-generation diesel-powered vehicles, these savings are projected to grow to 1.3 billion tons of CO2, 47 million tons of NOx, 2.7 million tons of PM, 130 billion gallons of diesel, and 3.1 billion barrels of crude oil.

According to Vehicles in Operation Data (2019-2020) from IHS Markit, a total of 15 states are at or above the national average for the percentage of clean diesel Class 3-8 commercial vehicles (all U.S.: 49%) while 23 states are growing their clean diesel fleets faster than the national average (all U.S.: 6.3%) A full state-by-state breakdown is available on the DTF website: https://www.dieselforum.org/in-your-state.