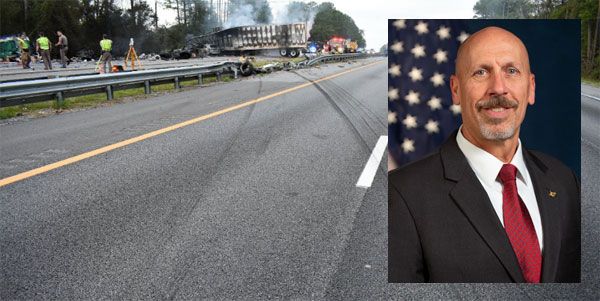 HDTX is a Heavy Duty Trucking event designed to facilitate networking and relationship-building among a select group of fleet management as well as between fleet managers and supplier representatives. Scheduled this year for Aug. 25-27, it includes select educational sessions and speakers, including a panel discussion with HDT’s Truck Fleet Innovators. Fleet managers apply to attend and if accepted, will be guests of HDT and the supplier hosts.

The NTSB investigates high-profile crashes in all modes of transportation. It has no regulatory power, but it makes recommendations following its investigations to other government agencies, as well as to associations, law enforcement, and other groups.

Every other year, the board publishes a Most Wanted List of transportation safety priorities. Its most recent list, announced earlier this year, addresses issues such as speeding, distracted driving, preventing impaired driving, and requiring collision-avoidance and connected-vehicle technologies on all vehicles.

More About the Speaker

Graham became the 45th member of the NTSB in January 2020. During a 2019 confirmation hearing, he told senators, “I’m not a lobbyist nor an academic. I’m a real-world operator who has been safely managing the risk of company operations by building a robust safety culture. I lead by example.”

In an early 2020 episode of the Behind-the-Scene @NTSB Podcast, Graham said one of the things he wanted to work on as a board member is the human factor in safety. “For us to really lower the accident rate in a lot of these different transportation modes, it’s going to take more than probable cause and contributing factors,” he said. “ I’d really love to see us focus in on human factors, and a standardization of human factors, so we’re all working off the same sheet from investigation to investigation and from mode to mode. Because until we really figure out why people did what they did, we’re not going to lower the rate significantly in any of these accident modes.”

(Human factors is an area where human behavior is studied in order to improve the interaction between people and technology, equipment, design or processes.)

Previously Graham was with Textron Aviation (which makes Cessna, Hawker, and Beechcraft), and since 2012 he served as Textron’s director of flight operations safety, security and standardization. He started the company’s highly successful Aviation Safety Program.

He began his career in the U.S. Navy as a naval aviator flying A-7s and F/A-18s and completed two operational deployments, including Combat Air Patrol missions over Iraq and Kuwait in support of Southern Watch. He served as FA-18 flight instructor, evaluator and model manager for all Navy and Marine F/A-18s. He received the Navy Achievement Medal for his development of an Occupational Safety and Health program. He went to work for Boeing/McDonnell Douglas before going to Textron in 1997.

Graham earned his B.S. in Mechanical Engineering from the University of New Mexico. He is also a certified Airline Transport Pilot with over 10,000 flight hours and is type rated in six different Citation models.

Other sessions scheduled for HDTX include:

For more information on HDTX and to apply to attend, go to www.heavydutytruckingexchange.com.

Uittocht Truckstar Festival – G.W. Trans – Scania V8 R500
The New VW California Is The Coolest Van You Can’t Buy & Here’s Why!
Tolner & G.W Trans – Intocht Nog Harder Lopik
These Are the LEAST (and MOST Safe) New Trucks You Can Buy Today!
The 2021 Ford F-150 Is So Stuffed With New Tech & Gadgets That Even Tesla Owners Are Impressed!