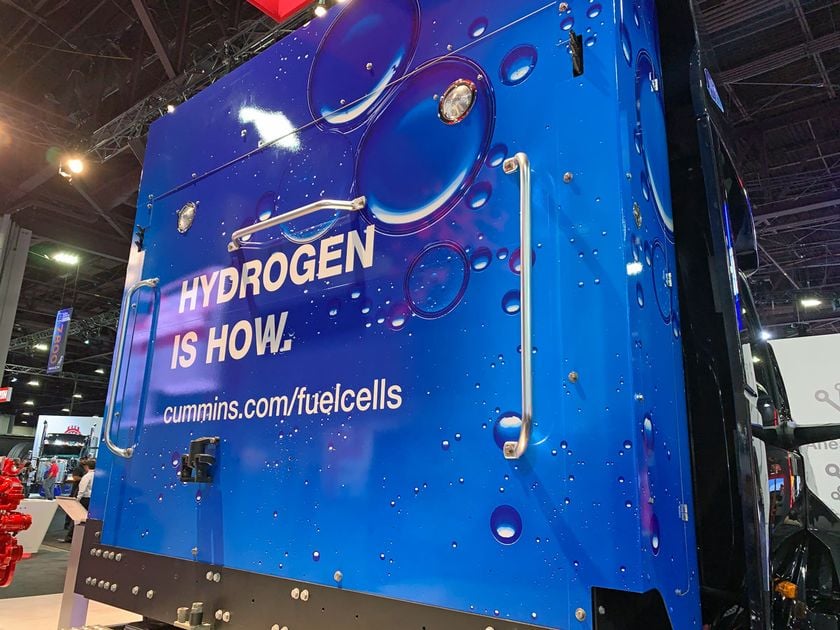 You don’t have to look very hard at all to be inundated by news about electric cars and buses and trucks these days. In the four-wheel world, some manufacturers plan to offer predominantly electric powertrains within the decade or nearly so. By 2025, Volvo aims for 50% of its cars to be “pure electric,” the rest plug-in hybrids. In Norway — a rich oil-producing nation — the majority of cars sold today are already electric.

The electric storm won’t slow down, and it’s just as strong in the trucking universe. But Daimler and Volvo recently put the hydrogen fuel cell option more firmly on the truck map than it’s ever been. (More on that in a minute.)

You won’t catch me owning an electric personal vehicle any time soon, I promise. It’s about the range, or dramatic lack of it. I just read one car-maker’s attempt to assuage range fears, which suggested that its car’s 250-mile maximum one-charge driving distance would be fine for long trips. When you hit that max, you just stop for a meal and wait 40 minutes for a fast charger to give you 80% of a full charge, they say.

First off, getting 250 miles out of a charge assumes warm weather, with limited use of air conditioning and electric bits like headlights, and certainly no trailer being towed. Try getting that far in winter when battery life shrinks like mad. No, thanks. I routinely drive from my Toronto-area base to Michigan and Indiana and such places, and an electric car just wouldn’t cut it.

Just take a Detroit jaunt. For me, it’s an easy-peasy 290-mile run with no stops. Do I want to gamble that I can stretch my range by 40 miles? Or shut it down and wait 40 minutes when I’m less than an hour away from the end? Assuming I could find a vacant fast charger.

Columbus, Indiana, is something like 625 miles for me, usually a straight-through run. In ideal conditions, an electric vehicle with that 250-mile range would demand three stops, again assuming fast chargers. As things stand now, my Explorer needs one fuel stop for five minutes or so and maybe another 10 minutes to grab a hamburger to eat on the fly. The extreme hassle of stopping three times to recharge, not to mention wasting a couple of hours while plugged in, would drive me nuts. That nine-hour trip would become 11-12 hours at least.

In other words, again, an utterly firm no thanks.

But hey, this is about trucking. In our game we have an advantage in many applications where the required range is predictable. Urban and close-regional freight work, towing, utilities, and such where the truck is likely shut down overnight are all fine for battery-electric vehicles.

But when we get thousands of cars and buses and trucks demanding power from the grid at the same time, where are we then? Billions of dollars will have to be invested over the next 20 or 30 years to make it all work. I’m not even sure that’s possible. And if the power isn’t produced by sustainable, environmentally responsible means, what do we gain?

Hydrogen fuel cells, on the other hand, don’t come with such baggage, though an expensive infrastructure does have to be developed. Crucially for trucks, a fill-up takes no longer than diesel does.

“Hydrogen-powered fuel-cell electric trucks will be key for enabling CO2-neutral transportation in the future,” said Martin Daum, chief of Daimler Truck. “In combination with pure battery-electric drives, it enables us to offer our customers the best genuinely CO2-neutral vehicle options, depending on the application.”

He was speaking in late spring during the formal launch of a new fuel-cell joint venture between Daimler Truck and the Volvo Group. The two companies outlined their “industry-first commitment to accelerate the use of hydrogen-based fuel cells for long-haul trucks and beyond” with the new venture, called cellcentric.

They say fuel-cell electric and battery-electric options are complementary, which they obviously are, if you accept that the grid and infrastructure challenges can be met.

According to a press release, the other major European truck manufacturers, backed by Daimler and Volvo, are calling for the setup of around 300 “high-performance” hydrogen refuelling stations suitable for heavy-duty vehicles by 2025 and of around 1,000 hydrogen refuelling stations no later than 2030 in Europe. Daimler and Volvo aim to start with customer tests of fuel-cell trucks in about three years and to be in series production of such trucks during the second half of this decade.

This joint effort does not mean that the two manufacturers are joining forces to produce trucks together. All vehicle-related activities will be carried out independently from each other, and the companies will remain competitors in all vehicle and product ranges, particularly in the integration of fuel cells in their trucks.

Cellcentric is a huge step forward in the advancement of fuel cells in Europe, where environmental goals are far more rigidly respected than they are on this side of the Atlantic, but of course the technologies it develops will be applied elsewhere.

Here in North America, Daimler and Volvo’s involvement in fuel-cell-electric trucks remains to be seen, but there are many others in the picture.

Cummins, for example, is a leader. Among other projects, which include a demo fuel-cell truck running in California and a joint development with Navistar, it bought the Canadian company Hydrogenics two years ago and has since built a 20-megawatt PEM electrolyser system to generate green hydrogen. It’s the largest such operation in the world. Installed at the Air Liquide hydrogen production facility in Bécancour, Quebec, it can produce over 3,000 tons of hydrogen annually using clean hydropower. The technical details don’t matter here. Just know that this solves the challenge of how to store hydrogen.

Kenworth, Toyota, and Shell have teamed up with public agencies in California to test hydrogen-fuel cell trucks at the Port of Los Angeles with four fleets (including Toyota’s own private fleet.) The Class 8 fuel cell electric trucks will have the ability to travel 300 miles on one charge of hydrogen.

An interesting new entrant is Hyzon Motors, which aims to build up to 100 hydrogen production hubs across the United States and globally. Each hub will convert organic waste in nearly every form into locally produced, renewable hydrogen for Hyzon’s zero-emission commercial vehicles, including garbage trucks. The first hub is planned at a landfill in the San Francisco Bay Area and is expected to be commissioned in 2022.

“In our considered opinion, the slam-dunk use case for hydrogen is heavy, high-utilization vehicles,” said company CEO Craig Knight in an interview with my colleague Jim Park. “A big vehicle that gets driven many hours a day is a bloody hard thing to get off fossil fuels without hydrogen. So we focus on those heavy kind of payload-imperative type vehicles, where they’re paid to carry weight.”

It’s ready to put trucks on the road this year.