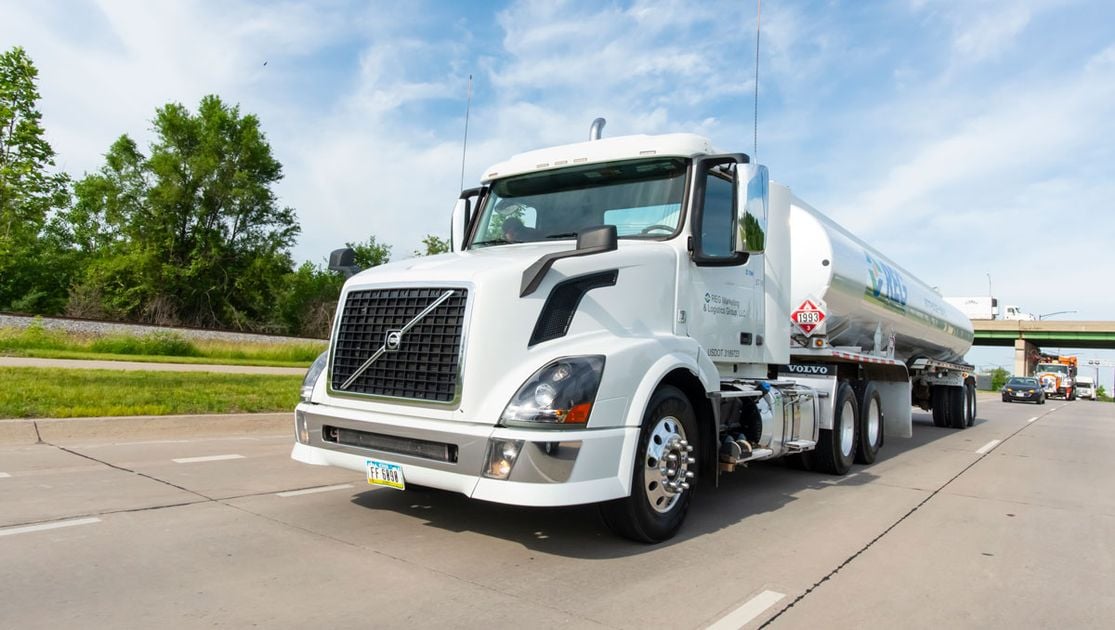 Biodiesel has been used by North American truck fleets for more than two decades, so most commercial fleets know what it is and that it is typically blended with petroleum diesel. For example, B20 is a fuel that’s 20% biodiesel and 80% petroleum diesel.

Less well known is that some fleets are running on higher blends, even up to 100% biodiesel, or B100, to take greater advantage of the renewable fuel’s environmental benefits. But what about performance? Warranty coverage? The cost? And how does it work anyway?

Those are some of the most common questions I receive about running trucks on 100% biodiesel, so I’ve put together this FAQ.

How Does B100 Work in a Diesel Vehicle? Isn’t Cold Weather a Problem?

Any diesel vehicle can run on B100 when ambient temperatures aren’t too low, but year-round operation in colder climates can be achieved with an upgrade to a vehicle’s fuel tank. This upgrade includes a split tank, with a smaller section for diesel and a larger section for biodiesel that can be heated in cold conditions.

The regular diesel is used on start-up to avoid potential cold-flow issues, and this allows the system to warm the biodiesel tank using engine heat. The system then automatically switches the truck to 100% biodiesel when the programmed temperature threshold is reached. At shut-off, the truck switches back to diesel long enough to displace the B100 in the engine supply line in preparation for the next cold start.

What Infrastructure Changes are Required to Run on B100?

Biodiesel can be used in the same fuel storage tanks and dispensing infrastructure as ultra-low-sulfur diesel. However, fleets with their own fueling sites often install a dedicated biodiesel (B100) tank, either because they still use petroleum diesel or biodiesel blends in the winter in vehicles that don’t have the dual-fuel system described above, or because they want heated storage for their B100 supply in the winter.

What Does B100 do to Reduce Emissions?

A growing number of local and state governments are adopting clean-air standards as well as carbon footprint reduction programs. And under the Biden administration, the federal government is prioritizing environmental protection. In addition, more private sector organizations are setting sustainability targets of their own.

Put simply, fleets are facing growing pressure to reduce their carbon footprints. That’s the primary driver of interest in B100 biodiesel, which can:

How Does Biodiesel Impact Vehicle Performance?

Biodiesel has some advantages over ULSD, including added lubricity, a higher ASTM specification limit for cetane, and a cleaner burn that sends less soot to diesel particulate filters, causing fewer DPF regenerations and less soot accumulation in engine oil.

For B100 fleets, we’ve kept a close eye on vehicles with newer diesel engines, particularly how biodiesel affects emissions-control devices. And the good news is fleets have now successfully run heavy- and medium-duty trucks on B100 for months and, in some cases, years.

Additionally, research by the National Renewable Energy Laboratory has found that properties sometimes cited by engine manufacturers based on the limits in ASTM D6751, such as the metal content of North America biodiesel, are well below the ASTM limits across the country.

OK, But What About my Engine Warranty?

This is one of the biggest misconceptions about alternative fuels in general. Engine companies do not produce or sell fuel, so they do not provide a warranty for fuel. An engine warranty covers parts and workmanship for the engine itself. That’s it.

If an engine part or system fails to perform while under warranty, the warranty has to be honored — unless your dealer or engine manufacturer can demonstrate that a fuel or other outside factor caused the problem. And if a problem is caused by fuel, it doesn’t matter if the fuel is biodiesel or petroleum diesel, the engine warranty isn’t covering it anyway.

Here’s how Cummins puts it: “This is no different from Cummins’ position with regular diesel fuel. Cummins does not cover the damage caused by non-Cummins products that are of insufficient quality.”

Also, guidance from the U.S. Department of Energy states, “Federal law prohibits the voiding of a warranty just because biodiesel was used.”

As for fuel prices, yes, B100 can be more expensive than regular diesel in some locations. But biodiesel is more competitive than you might expect, and state-level incentives can bring the cost down even further. As conventional fuel prices rise due to global uncertainties, B100 can quickly become more cost competitive to use, particularly when comparing the cost of carbon reduction for different sustainability options.

The year-round B100 system described above is affordable and only adds one new component that requires monitoring — a dedicated biodiesel filter — so the maintenance impact is minimal. Also, as mentioned, biodiesel can actually offer operational benefits in addition to its sustainability benefits.

Another return-on-investment consideration is the sustainability movement, which will continue to bring change to the trucking industry. Fleets must find ways to reduce their carbon footprints, and there are a number of options out there. Some require significant upgrades or even entirely new vehicles, while others, like biodiesel, allow fleets to use existing vehicles and infrastructure with little or no change.

What Have B100 Users Said About it?

Chris Geldart, director of the Washington, D.C., Department of Public Works, says: “We were looking for a solution to maximize emissions reductions while minimizing any effect on operations.”

Rich Iverson, fleet support manager for the City of Ames, Iowa, says: “Going to B100 with this particular technology is extremely practical for us. It’s a great first step as we get aggressive with our sustainability program. It works beautifully.”

Is There an Intermediate Option?

It’s not B100 or nothing. Biodiesel blends such as B20 continue to be the most popular option among fleets. There are also fleets that want to do more but are not ready to jump to B100. At REG, we’re seeing significant interest in higher blends in the B30 to B50 range, which have similar cold properties to B20 but offer more dramatic carbon footprint and engine emissions reductions.

It’s important to do what’s best for your organization. I encourage you to have a conversation with your fuel supplier and equipment manufacturer or dealer.

About the Author: Dave Slade is chief technologist at Renewable Energy Group, a producer of biodiesel and renewable diesel. REG can answer questions at (844) 405-0160 or connect@regi.com. This article was authored and edited according to HDT editorial standards and style to provide useful information to our readers. Opinions expressed may not reflect those of HDT.

* Fossil CO2 reduction estimates are based on the respective fossil carbon contents and energy contents (LHVs) of petroleum diesel, biodiesel and conventional natural gas (methane) and on 2019 U.S. electric grid information from the CA-GREET 3.0 model.