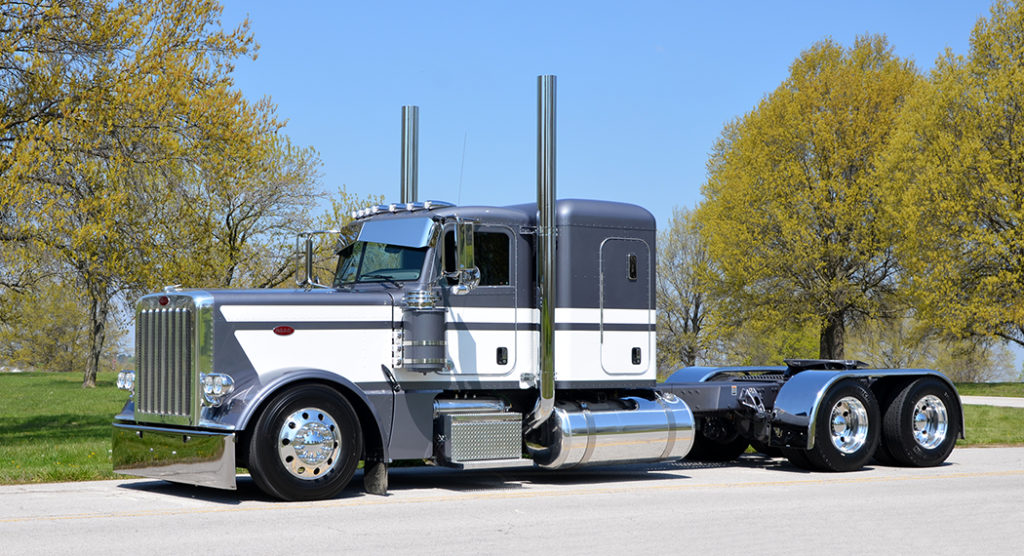 This month’s creation was built for Mike Lambert of Pajaro, CA.  At 61 years young, Mike still feels like a kid.  And now that he has a slick new rig to drive every day, he can’t wait to get in it and go.  But, unlike most, Mike wasn’t born with a “love” for trucking – it took time for it to happen.  But, once he fell for it, he fell hard.  And he’s been hooked ever since.

Way way back, Mike’s grandpa owned a grocery store and cut their own meats.  His son Jake (Mike’s dad) kind of followed in his footsteps by starting his own meat distribution business (Lambert & Son Meat Company) in 1958.  Providing meats for grocery stores and restaurants, Jake used a 20’ bobtail truck to make deliveries.  In 1976 the company landed a sweet gig providing all the meat and produce for 700 workers that were digging a tunnel in the nearby mountains.  To accommodate the increased workload, the company purchased an IHC single axle COE and a small pup reefer.  This is one of the many things that got Mike headed toward trucking, even though he thought he wanted to race motorcycles for a living.  His dad quickly squashed that dream, saying, “You need a real job.”

Mike graduated from high school in 1978, and two weeks later he turned 18.  The following Monday, his dad sent him to a friend that had trucks, Jimmy Hildebrand, and told him to ride with one of their drivers, learn how to drive, and then get a CDL.  Mike clearly remembers going to the driver’s room and feeling really intimidated – these guys were the real deal.  Learning the ropes from Bill Knight, Mike had his CDL by September of that year and away he went.  Starting from day one, Mike has been working with the Hildebrand family (and still does) and sends special thanks to Kelvin and Theron and their families.

Working at Hildebrand for almost ten years, Mike went out on his own in 1987, but continued to work with the Hildebrand family and their multiple trucking companies.  Working hard to build his company, Mike grew to ten trucks, but all that time working caused him to get a divorce.  Mike admittedly had a “less than desirable” attitude after the divorce, but since then, he and his ex-wife Dawn (who is happily remarried) now get along fine.  Mike and Dawn have three grown children – Cole (36), Kim (32) and Kory (27) – and six grandkids.

After the divorce, the company was dismantled and the equipment was sold but, thankfully, Mike had a trusty old 2-axle 1996 Peterbilt 379, which he eventually put to work.  At that point, he realized he liked just being one guy with one truck – life was a lot simpler – and he has remained in that mode ever since.  When it came time to buy a new truck, Mike’s friend Rawley recommended him to call me, and the rest, as they say, is history.  Mike is a cool guy, and we hit it off right from the start.

Over years, Mike has had a ton of cool trucks, but he wasn’t sure what he wanted this time, so he let me pick for him.  The truck you see here is what Mike calls the nicest truck I have ever built.  That might just be Mike’s opinion, but in this case, his opinion was the most important!  The truck is a 2021 Peterbilt 389 with a 48” flattop and a factory two-color paint scheme in vintage gray and white stripes, with a metallic gray frame.  Powered by a high-torque 565-hp Cummins X15 hooked to an 18-speed, the truck has a 280” wheelbase, Low Low AirLeaf suspension, an air-ride front end with a car-hauler front axle, full lockers, 22.5 low pro tires, and all the good stuff.

Once we were able to gather all the pieces, Cody went to work and installed one of my body drop kits, clear dual revolution lights (including seven cab lights and three breather lights on each side), 7” dummy pipes with 58-degree elbows for an older look, a stainless bad bowtie visor from Bub, and a custom bumper built by Valley Chrome.  It also got a flush painted Merritt deck plate with a recessed connection box, a hidden DEF tank, a shox box with lights, a rear tail box, and custom stainless rear full fenders from Hogebuilt.  Cody also added an “Alfredo” overinflate kit on the back of the truck.

When the truck was finished, Mike made the trip to KC with his good friend Tonya, and I have to say, she is a lot like Mike – a real kid at heart.  Everyone agrees, this truck has a timeless look that isn’t in your face screaming, “Look at me!”  But, when you take a closer look, you really see its beauty.  Mike Lambert says he never wants to grow up, and I have to agree.  And at just 61 years young, that seems like a solid life plan!