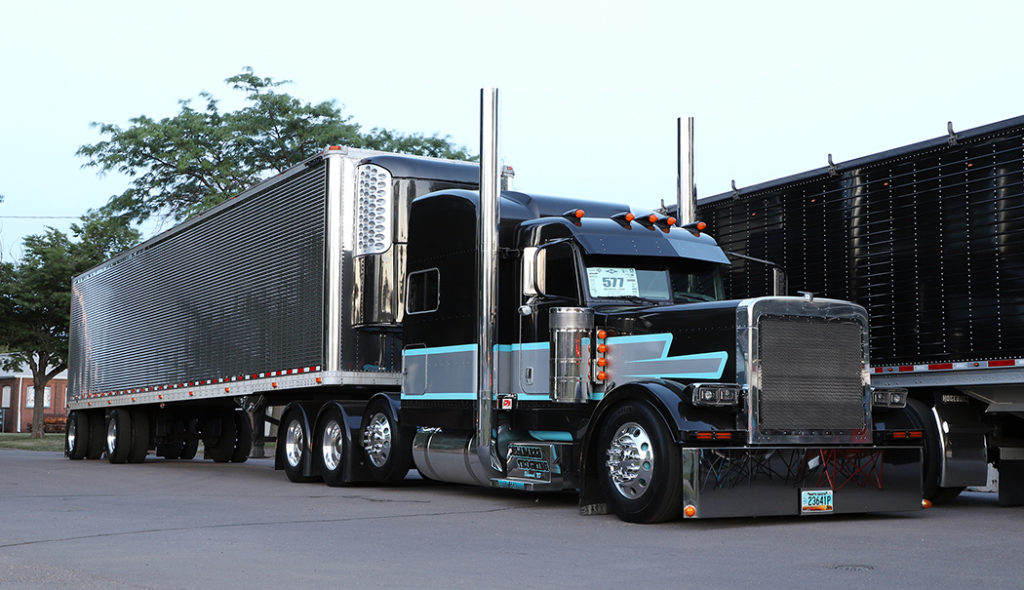 The 17th annual Wheel Jam Truck Show was once again a “Wheel Good Time!”  Held on June 3-6, 2021, in Huron, SD at the South Dakota State Fairgrounds, the show, featuring just about everything on wheels, drew in tons of cool older trucks, along with plenty of newer ones, as well.  And with planned activities throughout the entire weekend, there was always something to see and do at Wheel Jam, including a parade, an engine brake competition, lots of live music, car and bike shows, stock car races, and even a state-sponsored BBQ cook-off.

After spending a couple well-deserved vacation days in the Black Hills of South Dakota, we headed east across the entire state toward the small farming town of Huron on Thursday.  Registration was open, and trucks were already getting parked and cleaned up.  That day also marked the beginning of an uncommon (and untimely) heat wave.  With temps getting into the 90s, along with a fair amount of humidity, things were certainly heating up in Huron.

The highlight of this first day (Thursday) is always the VIP steak dinner that show producer Scot Marone and his 18 Wheel Truck Promotions crew hosts at his home.  Grilling over 200 ribeye steaks and serving them up with all the fixings and cold drinks, it was a fun and casual evening, complete with some live music, as well.

Friday brought even warmer temperatures, along with some wind, which helped ease the heat, but also added another inconvenient weather element to deal with.  As the grass areas of the grounds began to fill up, trucks started parking in paved lots, as well.  As part of the South Dakota BBQ Championships, happening on the other side of the grounds in conjunction with Wheel Jam, over 60 BBQ teams showed up to compete for cash and bragging rights – and have some fun.  Friday night they hosted a Chili Challenge, which, I was told, was awesome.

Most of the activities were planned for Saturday, and it was a full schedule.  Starting with a truck parade through downtown Huron at 10:00 AM that lasted about an hour, shortly after that the Dynamic Engine Brake Competition began.  Running fast down a closed street along the back side of the fairgrounds, trucks hit their engine brake at the appropriate time and rolled under a microphone, hanging above them, which measured the number of decibels.  Trucks were allowed to make three passes, which took about two hours, and the proud winner was Galen Koester of Redfield, SD.

As the day went on, it just got hotter.  By mid-afternoon, it was 104 degrees with about 40% humidity.  It was hot and sticky, and everybody was feeling the burn.  At around 3:00 PM, over in the BBQ Championships’ area, the “Backyard BBQ” competition was ready to be judged, which meant, for a small fee, people got to walk around and sample everyone’s food and then pick their favorites.  Smoking brisket, turkey, lamb and pulled pork, even just taking one bite of each meat from each entrant meant you were gonna eat a lot – and we did!  After voting for our choices, we headed over to check out the area with the hot rods, pickups and motorcycles.

Having rolled my ankle two times within a week prior to coming to South Dakota, I was hobbling around the show in a medical “boot” to protect it.  Thankfully, the Wheel Jam crew gave up one of their official golf carts for me to use all weekend.  What a Godsend!  We ended up decorating the front of it with a 10-4 poster and filled the back with various magazines and rolled posters to drive around and give them away.  We called it our “mobile 10-4 booth” and it worked out great.  Huge thanks to Scot and Tracy for helping us out and making that happen.

Driving around in our golf cart, we were able to see and visit with many of the vendors who had booths set up, including PDI, Lincoln Chrome, Peterbilt of Sioux Falls, Cornfield Mafia (selling trucking apparel and other various merchandise), Full Tilt Performance, Timpte Trailer, FirstLine Funding Group, Truckers Final Mile, and more.  There was also a kid’s area, filled with a variety of fun inflatables, various local vendors selling all kinds of non-trucking items, and a whole section devoted to everyone’s favorite – carnival food.  Taking full advantage of this opportunity, we partook in some corn dogs and deep-fried jalapeno poppers.

Saturday evening the show had a Trucker Appreciation Dinner inside an air-conditioned building on the show grounds.  With free food and drinks, and a nice break from the heat, you can bet there was a full house. After dinner, prizes were raffled off or handed out, a few people spoke, and then a bunch of people (10-4 included) made donations to Truckers Final Mile, a nonprofit organization that helps get drivers who have been injured or died on the road home.  The charity took in over $2,000 in donations just that night during dinner!

In addition to having a full-on judged truck beauty contest on Sunday, the Wheel Jam crew also awards an informal “Top 10” of their choosing (they call them their Show N Shine awards) on Saturday at the Trucker Appreciation Dinner.  Each of these “Top 10” award winners, which are chosen by the Wheel Jam crew in a very non-official or scientific manner, received a special trophy.  The winners were David Watson of Northville, SD; Dennis Johnson of Clark, SD; Michael & Jackie Wallace of Ashville, AL; Larry Olson of Mitchell, SD; David Foster of Joplin, MO; Boe DelaBarre of Bismarck, ND; Brian Cyr of Glyndon, MN; Chad Kretzschmar of Bryant, SD; Shawn Brink of Mandan, ND; and Ray Simon of St. Cloud, MN.  Saturday finally came to a close when the light show ended around 11:00 PM.  It was a fun day, but a long one, for sure.

With those hot temperatures still in play and wearing everyone down, Sunday was kinda quiet.  Arriving at the show grounds around 10:00 AM, some of the vendors were already packing up and many trucks had already left or were getting ready to leave.  A new batch of hot rods and classics were filling the space allotted for the car shows, and there were some really special rides over there.  Each day, Saturday and Sunday, had its own car show, put on by a different organization or club, so it was fun to check out the second batch of cool rides that rolled in.

With everyone chomping at the bit to head home and get some relief from the heat, Scot and his crew finished up the judging as quickly as possible and then handed out all the awards.  With trucks grouped into several classes, there were a good amount of trophies to hand out, but the two awards that stood out the most were a Lifetime Achievement Award given to Bernie and Lorna Feldhaus of Feldhaus Trucking in Howard, SD, along with a new award – the 18 Wheel Truck Promotions Legacy Award – which was given to a deserving trucker named Danny Wilde.  Driving since 1978 and logging over five million accident-free miles, this award was created to recognize devoted and talented company drivers, and Danny certainly filled the bill.

This event always features so many cool old trucks, like 359 Petes and A-Model KWs, and for some reason, this year there were more than usual International and Freightliner cabovers.  Not surprising, there are a lot of livestock haulers and more “bull bars” on the fronts of trucks than you could shake a stick at.  I typically do not like these bull bars, but they are a bit more acceptable (and necessary) mounted on a truck pulling a cattle pot in the Midwest.  When it was all said and done, there were about 200 trucks in attendance at the 2021 Wheel Jam Truck Show, along with hundreds of cool cars, motorcycles and pickup trucks, which made for a fantastic overall turnout.

After the show ended on Sunday evening and everything was cleaned up, we were able to go out and celebrate with Scot and his crew.  We would like to thank everyone for making us feel so welcome in South Dakota, and Scot Marone wanted to personally thank all of the drivers, owners, sponsors, vendors, spectators, and the entire 18 Wheel Truck Promotions crew, along with anyone else that was involved with the 2021 Wheel Jam Truck Show.  The dates for next year’s show are slated for June 2-5, 2022.  If you have never been to Wheel Jam and you love anything with wheels, we encourage you to check it out, because it is always a wheel good time!