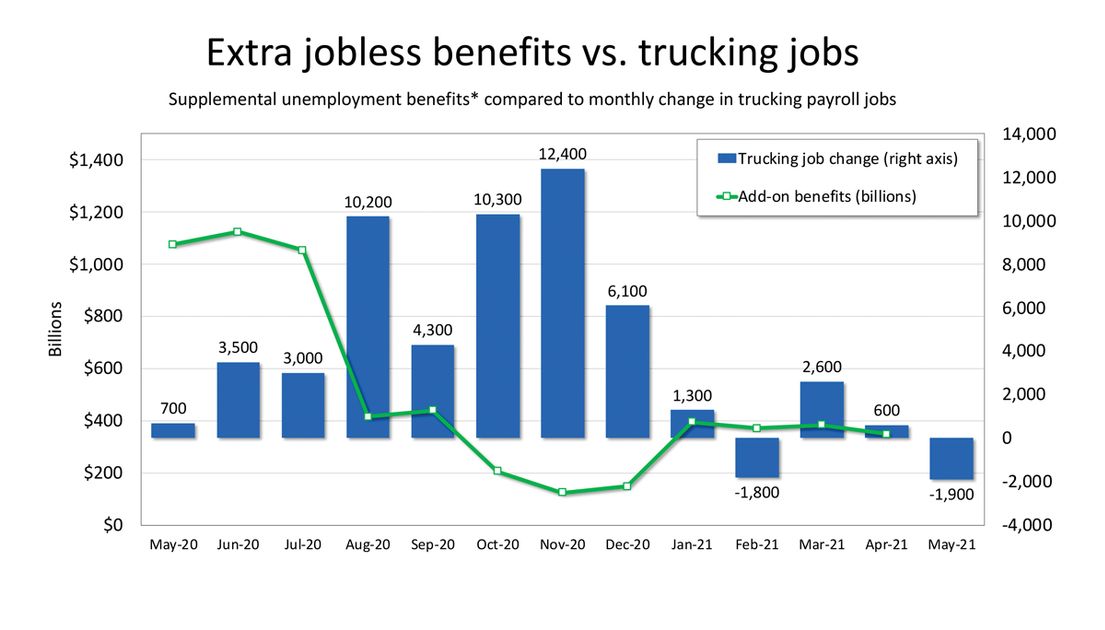 This summer, 22 states are opting out early from most or all of the additional federal unemployment benefits put in place during the COVID-19 pandemic. With signs that the economy is struggling to add jobs, many politicians blame generous unemployment benefits. Those benefits are slated to expire nationwide in early September, and the political winds seem clearly against further renewal.

FTR compared the median annual wage for heavy truck drivers in each state (as reflected in Bureau of Labor Statistics data for last year) with the maximum unemployment benefit (including the $300-a-week federal supplement) in each state as compiled by job placement firm ZipRecruiter. This analysis shows that unemployment benefits were surprisingly competitive. In 22 states, the median wage for a heavy truck driver exceeded maximum unemployment benefits by less than $5,000 a year. That includes five states (Massachusetts, Minnesota, New Jersey, Oregon, and Washington) where maximum benefits exceeded the median driver wage.

Of course, merely comparing the median wage to maximum benefits is too simplistic. Obviously, many drivers earned less than the median wage in their states before the pandemic. That’s just math. Moreover, many likely returned to driving or other work because they need health insurance or other benefits or just have a strong work ethic. On the other hand, we have seen sharp increases in driver pay packages over the past six to nine months, so last year’s BLS median wage figure might not truly reflect market conditions.

Nevertheless, it is clear that numerous former drivers could “earn” almost as much doing nothing as they could working in a stressful job like driving a truck.

Because of changes in benefits over the past year or so, we can test the idea that loss of benefits might make a difference. The CARES Act initially set the weekly unemployment supplement at $600 a week, but that went away at the end of July. A stopgap program kept $300 a week going for a couple of months — but there was no federal supplement for essentially all the fourth quarter of 2020, until Congress renewed the $300-a-week add-on in January.

The period of strongest growth in for-hire trucking payroll employment occurred during the period when federal add-on benefits first dropped sharply and then went away almost entirely for a few months. This is mere correlation, not necessarily causation. It also correlates with a period of strong freight growth. Still, this data doesn’t contradict a link between unemployment benefits and driver employment.

However, FTR is skeptical that ending generous unemployment benefits will fundamentally change the driver situation.

For starters, we would not expect the loss of benefits to lead to a significant increase in new truck drivers, because unemployment is highest in sectors that do not seem overly compatible with the job requirements and lifestyle of driving a truck, such as leisure and hospitality and health care. Moreover, the pipeline for training and licensing new drivers has not fully recovered from the pandemic.

As for whether former drivers will return, other drains on the driver force might have loomed larger than the extra unemployment benefits. We’ve seen sharply lower U.S. labor participation due to the pandemic (possibly indicating accelerated retirements, especially among the older driver demographic), as well as competition from other industries, and the impact of the drug and alcohol clearinghouse.

Certainly, some drivers remain sidelined by the availability of unemployment benefits. By this fall, we could have an idea of how significant a factor benefits have been, assuming no other big changes in the pandemic or freight environment.

This analysis appears in the July 2021 issue of Heavy Duty Trucking.

2017 GMC Sierra eAssist Hybrid: Everything You Ever Wanted to Know
2020 Jeep Gladiator Off-Road Pickup: Here Is Everything You Need to Know!
These Are the LEAST (and MOST Safe) New Trucks You Can Buy Today!
Truckstar Festival 2012 – DecibellenContest Finale #V8power.nl
Rola Wörgl Austria