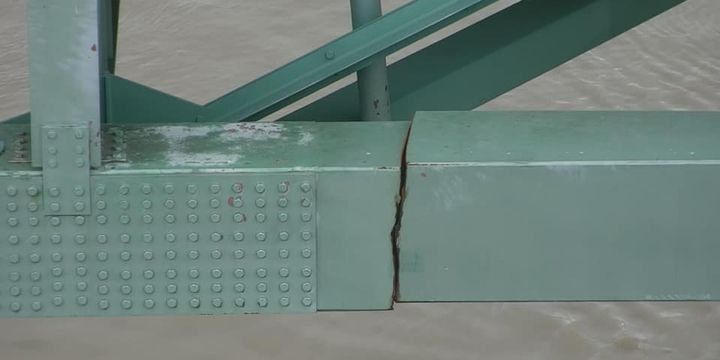 This is from a recording of a 911 call on May 13. Bridge inspectors had discovered an inch-wide fracture all the way through a 900-foot steel beam that supports the Hernando De Soto bridge connecting Memphis, Tennessee, with Arkansas.

The bridge was shut down and is undergoing repairs, but no word on how long that will take. Traffic has been rerouted to I-55, the only other river-crossing option in the Memphis area, 60 to 90 minutes away. Nearly a third of the traffic on the 48-year-old, six-lane I-40 bridge is truck traffic, according to the Arkansas Trucking Association. It estimates the closure is costing the trucking industry more than $2.4 million a day.

The situation has led to calls for better infrastructure funding at a time when negotiations for an infrastructure bill in Washington, D.C., are very much in the headlines. Transportation Secretary Pete Buttigieg said it showed why President Biden’s American Jobs Plan, which includes infrastructure funding, is needed. “We can’t afford to do nothing,” he said.

Republicans balked at the Biden proposal, which expands the idea of infrastructure to include areas such as fixing transit systems and veterans hospitals, removing lead pipes, and installing electric vehicle charging infrastructure. They want to scale it down to a more traditional infrastructure bill focusing on roads and bridges. And then there’s the question of how to pay for it. Biden wants to use corporate taxes rather than traditional user fees such as fuel taxes. He’s also opposed to Republican proposals to repurpose funds from pandemic relief packages (which is hardly a sustainable approach.)

Both Democrats and Republicans have expressed frustration about the prolonged debates about the very definition of “infrastructure.”

Buttigieg called it a “dorm room debate over which policies belong in which category” during an appearance on Fox News Sunday.

And in the wake of the bridge closing, Tennessee’s Republican governor, Bill Lee, said in a statement, “While Congress ponders the definition of infrastructure, we call upon the federal government to prioritize the safety of actual roads and bridges.”

At press time, Biden and Republican leaders were entering another round of negotiations. By the time you read this, it may be clear whether I was naïve in the “cautious optimism” I expressed early this year that Biden’s long experience in Capitol Hill deal-making and negotiation would actually result in passage of a decent infrastructure bill.

I am reminded of another bridge incident that focused the nation’s attention on infrastructure – one that was deadly. In 2007, 13 people were killed when the I-35W bridge over the Mississippi in Minneapolis collapsed, sending 111 vehicles plunging more than 100 feet into the river below.

The collapse was called a wake-up call for the nation’s infrastructure ahead of the next highway reauthorization in 2009.

“In the next reauthorization in 2009, we’re not going to settle for a bargain basement transportation bill,” said Rep. James Oberstar, a Democrat from Minnesota and chairman of the House Transportation and Infrastructure Committee, at the time, calling for an increase in highway user fees.

But it didn’t happen. And 14 years later, the federal fuel tax still has not changed since 1993.

This is unacceptable. The American Society of Civil Engineers says over 40% of the country’s road system is in poor or mediocre condition and that we have a $786 billion backlog of road and bridge capital needs. The U.S. Chamber of Commerce adds that our inadequate infrastructure costs us $170 billion annually in lost productivity.

It is way beyond time for politicians in Washington to come together and fix this problem.

This editorial commentary was first published in the June issue of Heavy Duty Trucking.