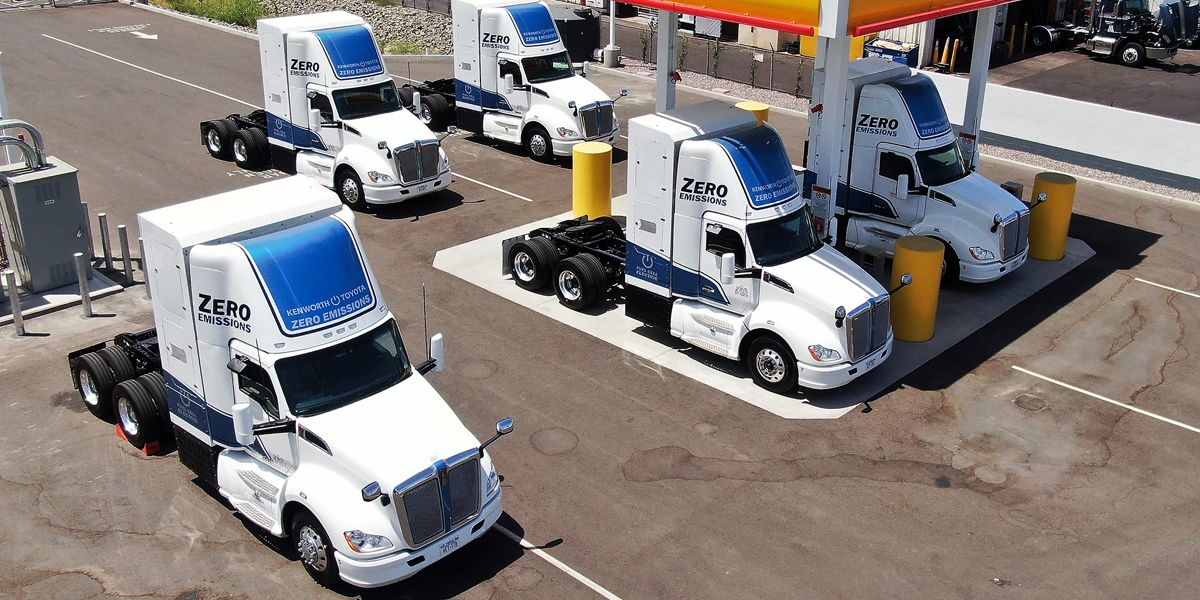 As part of a push to launch a new era of “pollution-free” goods movement, the Port of Los Angeles has deployed five hydrogen-powered fuel cell electric vehicles and opened of two hydrogen fueling stations.

The roll out is part of a $82.5 million project, called Shore-to-Store, which includes more than a dozen public and private sector partners who teamed up for a 12-month demonstration of zero-emission Class 8 trucks.

The Class 8 fuel cell electric trucks will have the ability to travel 300 miles on one charge of hydrogen, with 560 hp.

“It has enough torque that we can do a standing start at 20% grade,” Andrew Lund, chief engineer of advanced product planning at Toyota, said on the new trucks in a video posted by the port. “That is incredible power. All of this without any emissions. The only thing that comes out of the tailpipe is water.”

Through the demonstration, the port will assess the operational and technical feasibility of the vehicles in a heavy-duty setting, as well as to expand infrastructure to support hydrogen throughout the region.

“This project is a model for developing and commercializing the next generation of clean trucks and cargo-handling equipment for the region and beyond,” said Port of Los Angeles Executive Director Gene Seroka.

The first five vehicles, which were assembled at the Kenworth plant in Renton, Washington, are now delivered to fleets in California for commercial service at the Port of Los Angeles. Partners operating the trucks are Toyota Logistics Services, UPS, and trucking companies Total Transportation Services and Southern Counties Express.

“Shell believes hydrogen offers a promising solution to achieving net-zero emissions both in terms of immediate improvements of local air quality as well as meeting long-term climate goals especially for heavy-duty vehicles and for long-distance travel,” said Paul Bogers, vice president of hydrogen for Shell. “That’s why we are working with truck manufacturers, fleets, governments and others to coordinate hydrogen infrastructure investments in high-traffic freight areas like the Port of Los Angeles, Port of Long Beach, the Los Angeles basin and the Inland Empire.

The California Air Resources Board is supporting the project with a matching grant of $41.1 million. Project partners are contributing the remaining $41.4 million in financial and in-kind support.

Gas and technology leader Air Liquide is participating as a fuel supplier. The Port of Hueneme will partner on drayage runs and serve as the site for testing the zero-emissions yard tractors.

Other public sector partners are the South Coast Air Quality Management District, serving as a project advisor; the National Renewable Energy Laboratory, which will collect and analyze project data; and the Coalition for a Safe Environment, representing the community.

The vehicles’ duty cycles will consist of local pickup and delivery and drayage near the Port and short regional haul applications in the Inland Empire. Partners will study the technical feasibility of hydrogen-fueled tractors and battery-electric cargo handling equipment operating under the rigorous demands of the Southern California market. At the same time, they will measure the reduction of nitrogen oxide, particulate matter, and greenhouse gas emissions, as well as other pollutants.

The Port of Los Angeles S2S Project is part of California Climate Investments, a statewide initiative that puts billions of Cap-and-Trade dollars to work reducing greenhouse gas emissions, strengthening the economy, and improving public health and the environment.

Planning for S2S began in 2018. The project is one of 16 demonstrations underway at the Port to accelerate near-zero and zero-emissions solutions for moving cargo.

North America’s leading seaport by container volume and cargo value, the Port of Los Angeles facilitated $259 billion in trade during 2020.