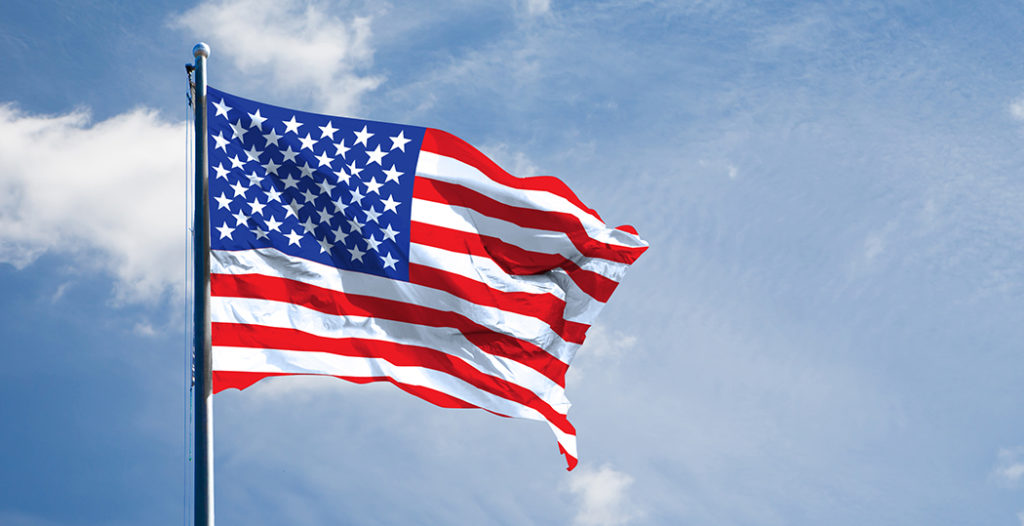 On June 14, 1777, America was still a colony according to the United Kingdom.  But here in the colonies we were in a rebellion to be free of England’s rule.  So, the Continental Congress decided that we needed a flag to make us independent of monarchy rule.  We were fighting for our freedom to become a republic, but we needed an official symbol that showed the world the thirteen colonies were united in the fight for freedom.  On June 14, 1777, the Stars and Stripes was born.  The official resolution was recorded as followed: “That the flag of the United States shall be of thirteen stripes of alternate red and white, with a union of thirteen stars of white in a blue field, representing the new constellation.”  It was official – our very own flag for the new nation.  The original flag was carried during the battle at Brandywine on September 11, 1777.  On February 14, 1778, Captain Paul Jones sailed the American vessel the Ranger into a French port with our banner flying high.  When the flag flew over a British Nassau, Bahama Islands fort, the world knew America was a new country on the horizon and started to recognize our flag.  How did America pick such a unique design?  Even today, as you view the world’s other flags, Old Glory stands out among all of them.  I feel such a sense of pride when I see it flying high.  When the Representatives wrote up the instructions for the American flag, they were not specific, so there were many variations to the flag.  In 1792, two more states were added to the flag, so it was decided to add more stripes and more stars.  As the United States added more states the additional stripes made the flag look awkward.  So, in 1818, Congress decided to go back to the original 13 stripes and just add a star for each state.  It was not until 1912 that the official pattern of the stars was set to conform to the pattern that we recognize today, making it possible for the stars to change as states were added.  She is a grand old flag, one that many have laid down their life and our freedoms for, from the Revolutionary War to the modern-day conflicts in the Middle East.  The flag has been carried into battle with all the glory and pride our Armed Forces display to honor this country.  June 14, 2021 will represent Flag Day to honor Old Glory.  She has waved over this country for 244 years.  The best words to describe the feeling one gets from viewing the flag is best described by George M. Cohan in his “You’re a Grand Old Flag” song.  The words that move one is, “You’re a grand old flag, you’re a high-flying flag, and forever in peace may you wave.  You’re the emblem of, the land that I love, the home of the free and the brave.”  On June 14, please fly your flag high and proudly.  It is not only a way to show your pride in our country, but to honor all who have fought for that glory.  Also, most importantly, may God still bless America!