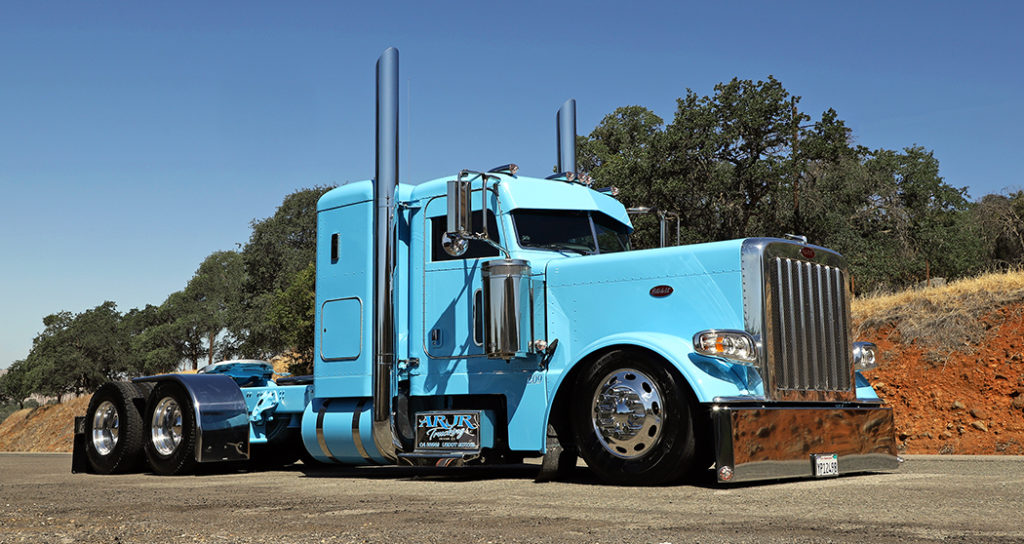 This month’s creation was built for Alfredo Ramirez Jr. (42) of Riverbank, CA.  Married for ten years to his wife Brenda, the couple has three children – a daughter Ximena (10), a daughter Xisela (9), and a son Josiah (5).  Alfredo also has an older daughter from a previous relationship named Amethyst (22), who is a student at San Jose State College.  Brenda is a manager at a bank in Ripon, CA and Alfredo runs his truck at T&T Trucking out of Lodi, CA.  Funny thing is, he hated trucks growing up because that is where he was sent when he got in trouble!

One of four children from Alfredo Sr. and Lina Ramirez, who immigrated to the United States from Mexico in 1977, Alfredo Jr. has an older sister Elizabeth who owns a temp agency, a twin brother Osvaldo who is the plant manager of a paper company, and a younger sister Ailleen who is the manager of a temp agency.  When Alfredo Sr. first came to America, he got a job “hanging turkeys” at a local processing plant.  Thankfully, he didn’t have to stay there long, and then got a driving job during the tomato season.  He liked it so much, he bought his own truck.

With his truck, he began hauling tomatoes and sugar beets, then transitioned to a reefer.  About 22 years ago, he found a home with T&T Trucking out of Lodi, CA, and still drives today.  However, when Alfredo Jr. and his twin brother would get in trouble (and that was often), their mom would send them off to spend the day with dad in the truck.  Alfredo said it was like being in detention hall, and he didn’t like it.  When he was in the truck, he wasn’t able to hang out with his friends and, at that age, that was a big deal.

During high school, Alfredo’s girlfriend at the time got pregnant.  When he heard the news, Alfredo left school and went to work.  Although his parents would have preferred him staying in school, they supported his decision to take care of his child.  Working at a temp agency for a while, Alfredo Sr. told his son, “If you are going to work, you can either make minimum wage or make some money.”  With that in mind, his dad helped him get a truck and he began hauling tomatoes.  At first, he was not excited about it (remember, a truck was his detention hall when growing up), so it took a while for him to warm up to driving, but he eventually learned to not only like trucks, but love them!

Growing up in the small town of Empire east of Modesto in Central California, Alfredo started out with a lowrider bicycle, then graduated to lowered cars.  At one point, he had a slick ‘72 Riviera with hydraulics – four pumps controlled by 16 switches.  Alfredo would drive, and his brother would run the switches.  He remembers one time accidentally “dropping” the car on his dog in their driveway.  Now, to this day, he always looks before he dumps!  He said the dog made it but was reluctant to lay close to the car ever again after the incident.

When he got his CDL, it cost him a ton of money to clean up his license.  Over the years, Alfredo had amassed so many violations from “showing off” in his cars, that he wasn’t even sure if they were going to give him a license to drive a truck – but they did.  Later, his dad got him a job with T&T.  He worked there for a few years, then left for a while, thinking the grass would be greener elsewhere.  But he was wrong.  Once he realized how great they were, he went back – and he never left.  He still pulls for T&T today, and he loves it.

When it came time to buy his first truck, Alfredo bought a Freightliner with a small bunk.  A few years later, he ordered a brand-new 2003 Peterbilt 379 Extended Hood with a small flattop sleeper.  He absolutely loved this truck, which was white and black with purple flames on the front.  And even though he had it fitted with a DPF filter, the state of California (CARB) still eventually forced him to get a newer truck.  Over the years, Alfredo became good friends with Tony Salinas, who had ordered a truck through me a few years prior, so Tony told Alfredo to call me.

Getting along good right from the start, I could tell Alfredo loved his current truck, and it was unfortunate that he was being forced to get rid of it and upgrade.  After reluctantly deciding to put his 2003 Peterbilt up for sale, it sold right away.  He then called me to order the new truck.  In the meantime, he found Dean, a great guy at Idealease in Turlock, CA, and rented a day cab IHC to drive until the new truck was ready to be picked up (he later admitted to liking the break from having to clean his truck all the time).

The new truck is a 2021 Peterbilt 389 with a 44” flattop, a modest wheelbase, a 565-hp X15 Cummins with 2,050 torque, a 13-speed, Low Low air ride, locking differentials, and all the goodies and lightweight options we could find.  He wanted it to be cool, but he needed it to be light.  When it came time to make decisions about customizing it, Alfredo’s friends Tony Salinas, Harvey Jaime, and Rey Fuentes helped us with ideas, and Rey actually came to Kansas City with Alfredo to pick up the truck.  Alfredo likes things low, so that was a no brainer, but he also wanted to be seen when out on the scene, so he opted for a sweet and bright baby blue color.

When the truck showed up, Cody was given the task of getting Alfredo’s truck dialed in.  He started by adding a House of Air front bag set up and then one of my body drop kits.  Next, he installed an 18” boltless Texas-style bumper with a modified flip kit (due to the body drop), extra grill bars, strapless air cleaners with chopped screens, and glass lights (five cab lights, one on each end of the bumper, and a single light on custom stainless breather panels).  Aluminum drop panels by Bub were added, the DEF tank was hidden, the door handles and fuel tanks were painted (the ends were left polished), and stainless box covers were mounted.

This truck came with a weed-burner exhaust underneath, so Alfredo had us install dummy vertical stacks, along with custom door chops to match one of my painted visors, a smooth and flush deck plate, stainless Hogebuilt half-fenders mounted on my hidden brackets, a train horn, a rear shox box with four lights, and four load lights, down low, on each side of the back of the sleeper.  A stainless and painted rear light bar was also installed.  Pat the painter sprayed all the paint for this one, and our friends at Thunder Grafix in Joplin, MO made and then sent us the signs to put on Alfredo’s truck before he left.

During the build, Alfredo said he needed a blower to be mounted on the back of the truck (he pulls a pneumatic trailer).  I asked him to send me a picture.  After seeing the picture, I told him I was not going to install it like that, saying, “If that’s how you want it, you can do it at home yourself after you pick it up.”  His friend Tony had hid one of these blowers on his truck, so I told Alfredo we could do it like that, and he agreed.  In the end, it turned out awesome.

After getting the truck home, Alfredo added the final touch – pinstripes!  Denise Corbett began painting in 1983 and then started her own pinstriping and hand lettering business in 1997.  Over the years, her business grew, and today, working as Corbett Graphics out of Modesto, CA, Denise, who is well-known for her creativity and talent, laid down some killer pinstripes on the back of Alfredo’s sleeper and on his deck plate.  It was the perfect final detail.

Thanks to Tony for the guidance, Cody for putting everything together, and Chad with C4 Truck Repair for getting the new big blower mounted and virtually hidden.  My (backwards) theory has always been that looks are more important than function.  It’s easier to make a good-looking part functional than a functional part good looking.  Yep, that’s my story, and I’m sticking to it!

Alfredo’s motivation has always been his family, and even though Alfredo and his oldest daughter’s mother did not stay together (and they moved away to San Jose), Alfredo made it a point to call her every day and maintain that relationship.  His family keeps him going, and even though he loves his job and his truck, he loves his family more.  Learning to love trucks and trucking was not hard for Alfredo Ramirez once he realized it was not detention hall, but instead, a great opportunity to support his family… and look very cool doing it!