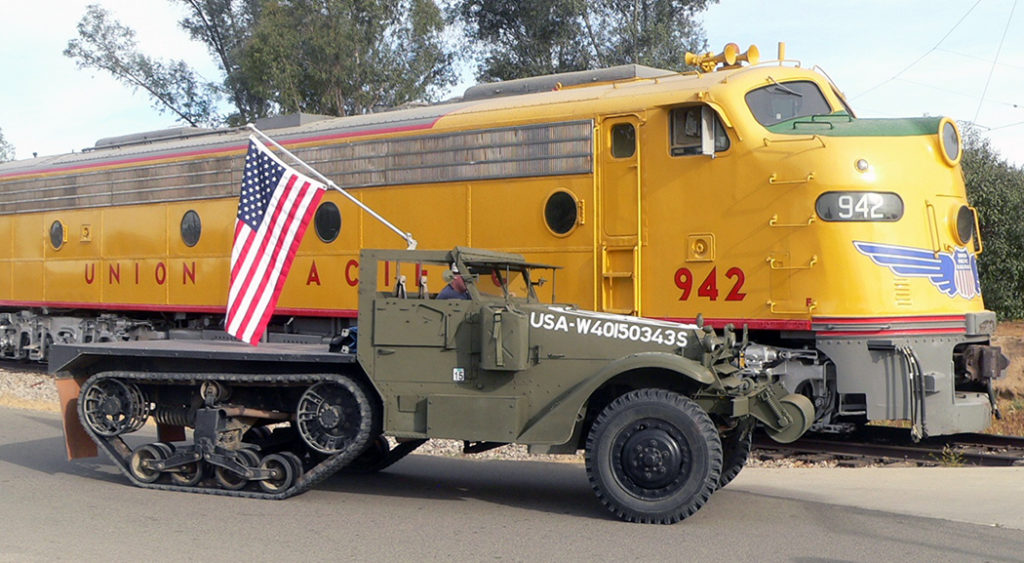 The Southern California Railway Museum in Perris, CA was a perfect setting for the 36th annual Antique Truck Show hosted by the SoCal Chapter of the ATHS on Saturday, May 1st.  With nearly 100 years of railroad history, the show trucks, much from the same era, were enjoyed by all.  Last year the show hosts were grateful to have any show at all due to the extreme Covid conditions and only 75 trucks.  This year, however, with so many people suffering from “cabin fever” and wanting to get out, the 2021 show set a record with over 200 total trucks, pickups included, from as far as Fresno, CA and Yuma, AZ.

After waiting in line to get a ticket to enter (from an old-school ticket booth) and then crossing the tracks, it was like stepping back in time.  With the sound of train whistles and diesel locomotives, trolleys passing by, and old delivery trucks parked along the streets, it truly felt like a scene from days gone by.  What a fitting venue and location for an antique truck show!

With very warm temperatures and unseasonably humid weather, most people were “hiding out” in the shade for most of the day, even though there were some really nice grassy areas to enjoy.  Besides the occasional cool breeze that would blow through, there was not much relief from the heat on this balmy Southern California afternoon.  But, thankfully, there were tons of cool antique trucks and pickups to distract everyone from the discomforts of the day (cold water and beer helped, too).

There were many special and unique vehicles in attendance this year, including a collection of Crown Coach buses, fire engines, and military vehicles.  The Western Antique Power Association brought a collection of “hit-n-miss” engines and tractors.  A swap meet with an assortment of vintage goods was well received, too.  The DJ entertained the participants with oldies and truckin’ tunes throughout the day.

Many of the “usual suspects” had old iron at this event, including Mike Green, Stan Alles, Phil Callen, Terry Klenske, Jerry Salinas, and Joe Arias, who brought out a cool mint green Peterbilt cabover.  Vic Caliva also had a very nice little white and silver 2-axle 1987 Pete 359 with pink stripes, and Mark Tarascou was showing off his new bright red and black 1957 Kenworth 921 drag truck.  I think the coolest rig was a “rat rod” built for hill climb racing and hauling other hot rods, owned by Shawn Parker of Lake Mathews, CA.  The light blue and rusty truck is a 1940 Diamond T Deluxe equipped with 1933 Packard door handles, front wheel drive, and a keg fuel tank mounted on the back.

The conclusion of the day was the presentation of the awards, with the event’s “signature” trophies made from various truck parts.  Although not a truck, the California Fire Museum brought a beautifully restored 1902 steam pumper, which won the “Special Interest” trophy.  A very dedicated person drove a 1943 Autocar half-track over 30 miles on side streets to win the “Best Military Vehicle” trophy.  A 1953 Fageol was awarded the “Most Unusual” trophy.  The oldest truck was a 1920 White.  The “President’s Choice” award went to a yellow 1966 Kenworth with a flame paint job.  And the “Best of Show Big Rig” award went to a recently restored dark blue and black 1951 GMC 970 with a sleeper owned by Tom Cipponeri of Riverbank, CA.

Plans are already being made for next year’s show, which will be held on Saturday, May 7, 2022.  For more details about the Southern California Chapter of the American Truck Historical Society, visit www.socalaths.com.  It was a hot and humid day, for sure, but a cool one, nonetheless, as I got to step back in time, if just for one day.