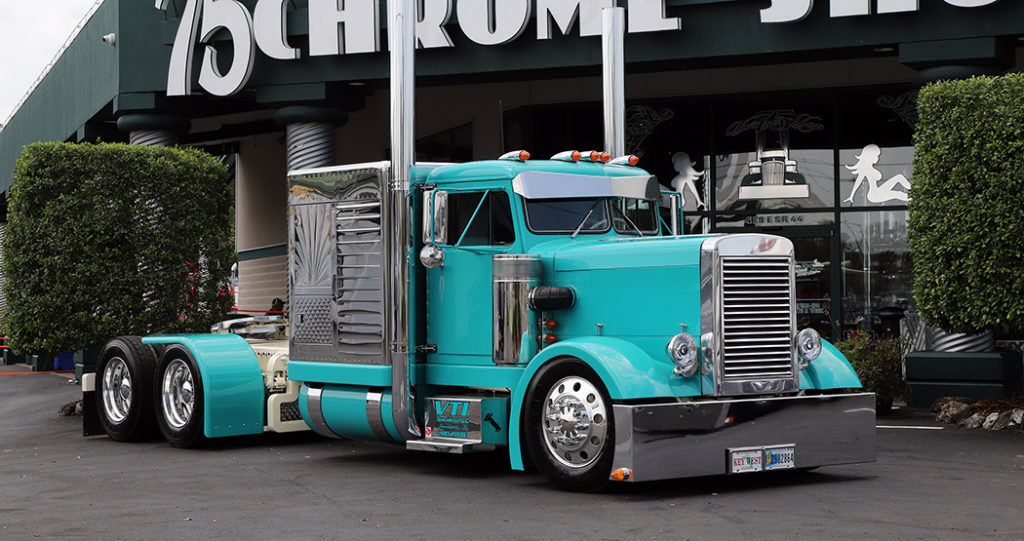 If the first few shows of 2021 are any indication of how the rest of the year is going to be, this truck show season is going to be hot, hot, hot!  With over 160 registered trucks on the lot, this was the largest turnout ever at the 23rd Annual 75 Chrome Shop Truck Show presented by RoadWorks.  With several stellar builds being introduced and tons of other amazing bobtails and combos, this event was crazy busy.  Add to that the infamous Florida heat and humidity, and this show truly was hot, hot, hot!

Held in Wildwood, Florida on April 23-25 in the parking lot in front of, next to, and behind the 75 Chrome Shop, the trucks, along with over 20 vendors, were jammed into the space from end to end and front to back.  Arriving the day before and then setting up on Friday morning, our booth was positioned near the RoadWorks display, which featured their current “Night Moves” Peterbilt 389 show truck and trailer, painted bright green, metallic silver, and black.  Parked next to our booth was also our friend Gary Jones and his “Not Daddy’s Money” show truck (our July 2020 cover feature) and Dill McKinney’s “Lucille” 379 Peterbilt (featured in our August 2020 issue).

Attending the show with most of the “Team 10-4” crew present, we handed out magazines and posters, sold t-shirts and hats, walked around and talked to people, took lots of photos, and did several live remotes from the event.  A big thank you goes to Gary Jones for lending us his golf cart for the entire weekend, and then fixing it for us after it broke down.  Friday was a beautiful day with warm temperatures, bearable humidity, and a pleasantly cool amount of wind, but it was a long day, which started at around 9:00 AM and did not end until the light show was over some time after 10:00 PM.

Saturday started early, as well, and the weather took a turn for the worse.  Temperatures soared to the lower 90s, the humidity came up, and there was no wind.  And that Florida sun, if you have never felt it on your skin, just seems to be more intense (we all got a good sunburn that day and a couple of us even ended up with a bit of heat stroke).  Saturday featured the famous dancing girls on stilts, that walked around and posed for pictures, a concert by Tony Justice in the RoadWorks booth, and then the “official” light show, which went until after 11:00 PM.

In addition to the vendors on-site, including Big Rig Tees, Big Strappers, Diesel Life, Dynaflex, Hot Rigs Apparel, Iowa Customs, Large Car Life, Largecar Magazine, Lincoln Chrome, Minimizer, Palomar Insurance, PDI, Renegade Products, Rey Logistics, RoadWorks, 10-4 Magazine, The Happy Toy Maker, Trucker’s Final Mile, Trux Accessories, Valley Chrome, and Zephyr, there were also several food trucks.  Island T’ings focused on Caribbean style food (everyone raved about the tacos but every time we tried to get them they were sold out), another one focused on BBQ/smoked food, there was one with corn dogs and hamburgers, and one featuring ice cream and other frozen treats.

Walking the lot, there were many amazing rigs – too many to mention them all – but there were a few real standouts.  Bubba Branch and his bright red “Just a Phase” KW was standing tall, as was PMI’s white and purple “Snow White” Peterbilt, K & D Transport’s cream and red Kenworth with a matching motorcycle on the back, Vinnie Diorio’s latest black, red and white Peterbilt, and Kaleb Hammett’s newest build, a red and gray 2019 heavy haul Peterbilt 389 with a matching 2021 Etnyre lowboy trailer called “Hoss” in honor of his grandfather.  Our past cover trucker Ryan Derrickson (July 2011), who now runs for Berry Trucking out of Medford, Wisconsin, also brought out their latest head-turning creation – a brand-new turquoise-colored Peterbilt 389 with a standup sleeper hooked to a matching polished stainless reefer.  This combo was classy and clean!

But the two rigs that were getting most of the talk during the show were two new builds making their debut – one was a 2003 Peterbilt 379 with a matching Mac trailer owned by Don Wood of DSD Transport in Denmark, Wisconsin, and the other was a Key West themed 1956 Needlenose Peterbilt 351 owned by Bob Vogel of VTI Specialized out of Indianapolis, Indiana.  Don Wood’s “High Maintenance” 379, painted light blue with yellow stripes, featured an amazing hot rod style interior, a fully decked out engine compartment, and a matching trailer.  Built by Nick Kimball and the team at AMCAN Truck Parts and TA Truck Painting in Wisconsin, this awesome combination not only got a lot of attention from the crowd, but it also earned the “Prime Shine” award chosen and presented by the folks at 75 Chrome Shop (this was one of only two trophies awarded at the entire event).

Bob Vogel’s 1956 Peterbilt 351 bobtail, built over the last few years by Dustin Dickerson and his team at Dickerson Custom Trucks in Thorntown, Indiana, was inspired by Key West.  In fact, the truck was even named “Low Key” in honor of the place Bob loves so much.  Featuring more custom pieces than you could shake a stick at, the rig, which was assembled atop a modern 260” chassis, is powered by a completely rebuilt Cummins 262 hooked to a 5×3 transmission and 3.70 rears.  It also features a Mercury-inspired aftermarket sleeper, cutting-edge lighting, and a totally custom interior, which includes a cool custom-printed floor with a photograph of the famous “Seven Mile Bridge” in Key West.

In addition to Don Wood receiving the “Prime Shine” trophy, the only other award, the People’s Choice (voted on by attendees who cast their vote at the RoadWorks tent), went to Davis Brothers Designs for their “Loud N Heavy” black Peterbilt with silver stripes show truck and matching RGN trailer, which features an enormous sound system integrated into both the truck and trailer, featuring well over 35,000 watts!  Pumping out loud music during the entire event, people even did dance routines out in front of the truck during the Saturday night light show and applauded every time a song ended – like it was a real concert!

After the trophies were awarded on Sunday morning, the lot emptied quickly, as everyone headed out to get back on the road and back to work.  Vendors took down their displays and things got back to “normal” by the end of the day.  We hung out and talked to people and took more pictures for the entire afternoon.  Sunday was more relaxed, and it was nice to just visit with folks and hang out after such an exhausting few days.  And, just like that, it was over.

Many people referred to this show as the “Louisville” of 2021, since MATS got canceled and many new builds made their debut in Florida instead of Kentucky.  And we had to agree – it felt like truck show season was officially open during this event.  Based on what we have seen from other events held early on in 2021, it looks like this is going to be an epic year for truck shows.  If you missed this one, you missed out, because it was hot, hot, hot!  Don’t make that same mistake next year – just be sure to bring plenty of sunscreen with you.

The New VW California Is The Coolest Van You Can’t Buy & Here’s Why!
These Are the LEAST (and MOST Safe) New Trucks You Can Buy Today!
Truckstar Festival 2011- Mooiste Truck Verkiezing met Weeda, Termeer en Gebr. Koot
Truckstar Festival 2010 Fleurs v.d. Eijkel Uittocht
2017 GMC Sierra eAssist Hybrid: Everything You Ever Wanted to Know