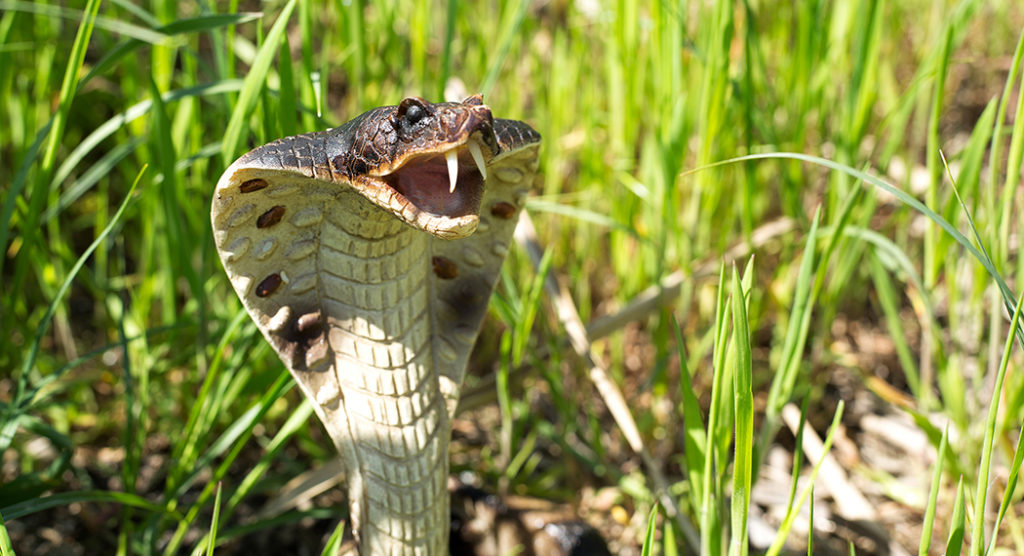 The other night I decided to watch the 1950s production of “The Ten Commandments” – it had been years since I first saw the movie.  This time my curiosity was peaked after a certain scene.  Moses, played by Charlton Heston, had an audience with the Pharaoh played by Yul Brenner.  This was the scene when Moses lays down his staff and it turns into a king cobra and the Pharaoh’s magicians lay down their staffs and they also turn into cobras, but Moses’ snake eats the other cobras.  This was to show that the staff given to Moses by the Lord was the most powerful.  Well, I thought about that scene, and it makes one wonder if a cobra was the length of that staff, could it really eat other cobras?  Now Charlton Heston was 6’ 3” and that staff was taller than him.  Hmmm, some interesting concepts here.  Yes, a king cobra can be 18 feet!  The name King Cobra is for the fact that it can eat other cobras.  A little scary, this is a snake one does not want to meet in the wild.  Usually, the snake will shy away from people, but if it is startled or protecting its nest, it will literally stand up on its coiled body and will stare a person in the eyes.  It can move its body at least 1/3 of its length forward and attack.  I don’t know about you, but I never want to be in that situation.  Its diet is of other snakes and it usually lives 20 years in the wilderness.  They are the most venomous snake on the planet.  The amount of venom in three to four bites in rapid succession is enough to kill an elephant or about 20 men.  The venom causes respiratory and cardiac failure, so its prey does not stand much of a chance to survive.  The teeth are in the upper jaw and reach a length of ½ inch.  The teeth are slanted backward to enable the snake to swallow its meal.  The King Cobra is found in parts of India, China, Malay Peninsula, Indonesia and the Philippines.  Amazingly, the cobra has good eyesight, as they can see as far as 330 feet.  If you are ever in the area where the cobra hunts its hiss is more like a dog growl, unlike the normal hissing of a snake.  Another interesting fact is that a male and female will mate for a long period of time, even for life.  They do make a nest and the female can lay as many as 20-40 eggs at a time.  She then lays on top of the nest and the male is close by for protection.  The eggs are laid in the spring and hatch in the fall.  Nature is interesting, and each species is unique.  If you think about it, we do live in a wonderful world.  It is up to us to make sure we take time to enjoy the wonders – even the scary ones!