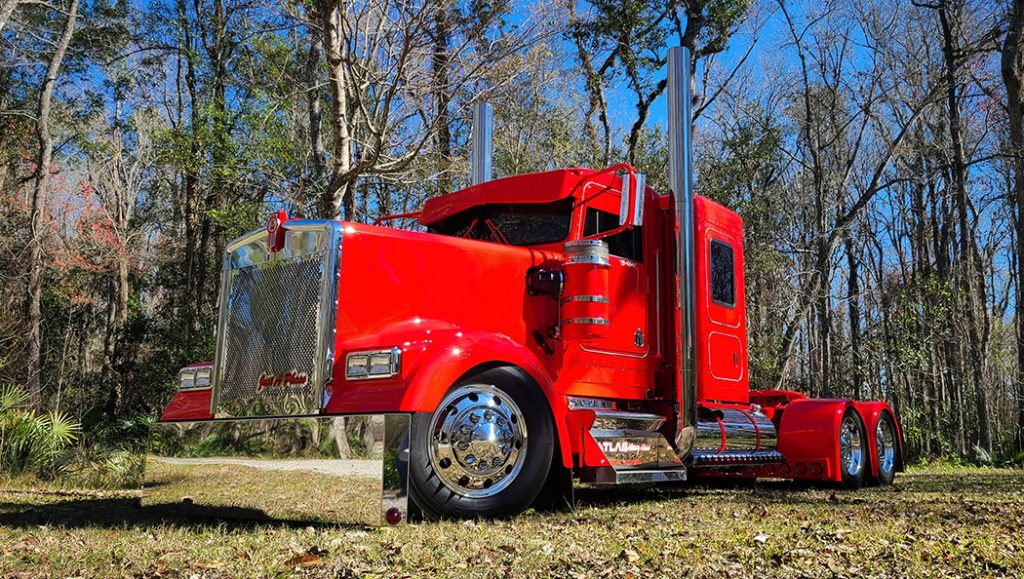 Trucking is one of those industries that often has multiple generations of family involved, along with a brother and sisterhood of caring, helpful, and understanding people working together with one another.  For Bubba and Krystal Branch out of Lakeland, Florida, that “brotherhood” of trust was far from what they experienced with their previous custom truck.  A good deal gone sour, an emotional more than financial set back put Bubba on the sidelines for a period of time.  Using it as motivation, Bubba put a plan in motion to use this opportunity to build the truck his head and heart have always wanted.  And although the name suggests it was “Just A Phase” (literally), this amazing build has been embedded in Bubba’s brain for years.

With his mind laser focused on his new-found goal, Bubba hit the internet and his network of friends in search for the foundation of this build – an older model “flat glass” Kenworth W900.  After looking for some time, it didn’t seem possible that the truck Bubba saw in his mind was out there.  Then, one evening, while scrolling through the inter-web, Bubba stumbled upon a 1996 W900 flat glass with a 550 CAT and an 18-speed transmission living in New Jersey.  A few phone calls later, Bubba was sitting on a plane Jersey bound.  The truck was originally from the Carolinas, hauling grain locally, before being relocated to New Jersey.  The rig passed Bubba’s inspection, and he was determined not to leave without it.  After a day of title work, Bubba was rolling southbound, back to Florida in his ‘96 KW.

Once home, the detailed “pick and prod” inspection was in full effect.  A handful of issues surfaced, but nothing Bubba and his guys couldn’t handle.  Getting those issues taken care of first and foremost gave the ole ‘96 the sturdy foundation necessary to handle all the creative ideas that had been resting in Bubba’s head for so long.

Knowing that his vision would require some custom pieces, getting those ideas in front of the right people Bubba trusted most was key.  Reaching out to the guys at Talladega Fiberglass proved to be the right call.  Talladega began by making and shipping a one-off custom visor solely for Bubba’s KW, along with a set of rear T-bars for in front of and behind the rear axles.  To ensure they were installed perfectly, Bubba drove the truck over to the Talladega shop in Alabama for the installation of the rear single-hump fenders.  Once back home in Lakeland, Bubba called upon his friend Jesse Hall to help fabricate the rear deck plate.  Wanting to go the extra step to be original, Bubba called upon longtime friend Clint Dicks looking for a set of sleeper doors with windows.  A road trip to Clint’s place in Georgia on a slow afternoon landed the sleeper doors in the bed of Bubba’s truck.

Before delivering the truck for paint, some under the hood attention was a priority.  Bubba and his shop mechanic installed the Air Ride by Horse front axle air ride giving “Just A Phase” the proper attitude and altitude adjustment abilities.  Wanting to remain mostly stock, a PDI tune was placed on the 3406 CAT, giving it a little performance boost, for when Bubba is pulling those oversize loads for his company, Atlas Heavy Haul.

Whether you know Bubba or not, as you can see, red is his favorite color.  Knowing in his mind, Bubba wanted to make a statement with an in-your-face, loud, bright, “Here I am!” red that almost hurts your eyes in the sun.  That task was handed off to Matt McCall of McCall’s Paint and Body of Winter Haven, FL.  A complete color change from white to red on this much canvas is no easy task, but Matt hit the ground running without fear.  After a series of intense prepping, spraying, sanding, clearing, and then repeating (several times), the final result of the Viper red paint is flawless, and it exceeded Bubba’s expectations.

Once back from paint, the final assembly was underway back at Bubba’s ranch.  The guys at RoadWorks made custom fuel tank light bars, holding 16 watermelon marker lights, along with custom breather lights.  The 8-inch Stove Pipe exhaust is also from Roadworks, as is the punched grill and plate with the truck’s “Just A Phase” name on it.

Taking a lunch break from the truck, Bubba met up with his friend Bronson who is a metal fabricator and welder.  Knowing the truck will be working daily, Bubba needed to add a few functional pieces for the support of his equipment low boy trailer.  After a few sketches on a napkin at the table, Bronson wanted to put his custom touch on the saddle brackets that supports the trailer gooseneck on the truck’s frame.  The results were a success, as Bronson cut the “mud flap lady” silhouette into the brackets, adding yet another element of cool to the flashy red Kenworth.

The final piece to “Just A Phase” was the interior.  In order to make the inside as special as the out, the headliner and door panels were fitted with button tuck pieces stitched by the people at Truck’N Awesome and installed by Bubba’s wife Krystal.  Gauge bezels and dash accessories were painted red to match, then also added by Krystal.  The 75 Chrome Shop in Wildwood, FL did the floor by creating a custom fiberglass and epoxy compound painted to look like red and white marble.  Bubba’s oldest son Preston handled the audio, which included custom door speaker enclosures, along with installing the tuner and separate speakers throughout, to give Bubba that extra “bump” when cruising or working.  The final piece to wrap up this dream build was a trip to the 75 Chrome Shop with his son Kolt where Bubba asked him to pick out the shift knob of his choice.

“Just A Phase” is not just a red Kenworth truck – it’s one man’s vision and the catalyst in his process of moving on.  Things happen for a reason.  It took Bubba and Krystal some time to fully understand those reasons, but now they are in a better spot.  With his dream truck now a reality, Bubba Branch is blessed with great friends, a thriving business, and doing his part to make this industry a better place.  We sure hope that attitude isn’t “Just A Phase” for Bubba!