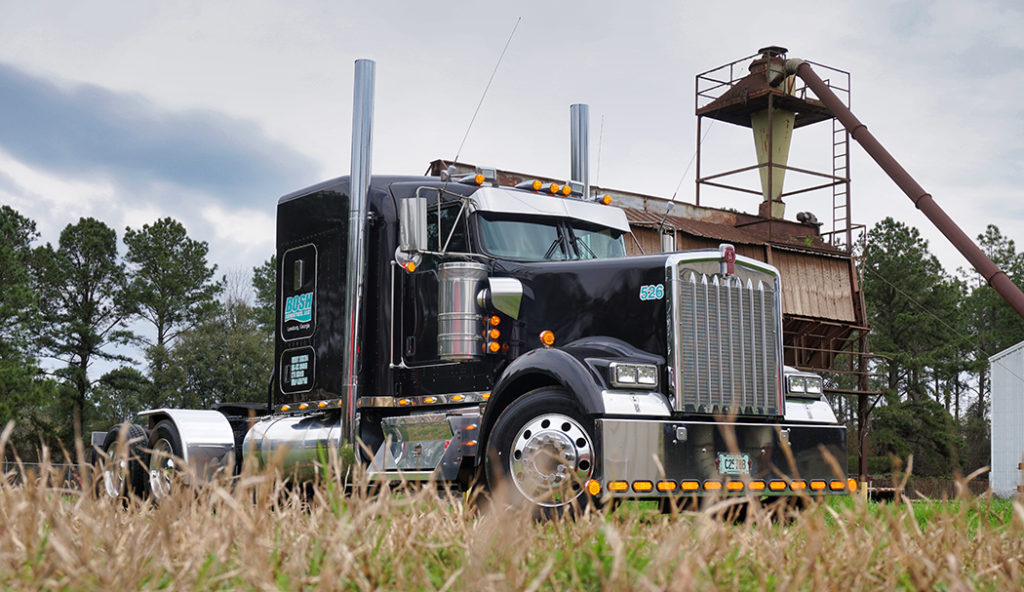 Everyone that drives, at one point or another, has thought about or even dreamed of becoming their own boss – an owner operator.  The freedoms you have from being your own boss can also bring struggles which some people are not prepared for or made for.  Donnie Hayes knew from the get-go that driving for someone else was not an option – he always wanted his own truck.

Donnie was born Owen Ladon Hayes, with his first name after his dad’s father and Ladon after his mother’s dad.  He got the nickname Donnie early on because a few of the boys in the family also received Owen as a namesake.  Donnie, second generation in trucking, knew at the age of three or four that he would get into trucking after regularly starting to ride with his father.  His father would haul from Georgia to Texas, two to three times per week, hauling tires.

As previously mentioned, Donnie did not want to be a driver for a company, so as soon as he got his CDL, at the age of 18, he, with his father cosigning, purchased his first truck on March 9, 2006.  The truck was a 2000 Kenworth T600.  He began as an owner operator leased onto his mom’s trucking company and, through the years, would learn the ropes from her on how to properly run a company.  He remained leased onto his mom’s company until December of 2014 when he got his own authority under the name BOSH Logistics, LLC.  How did he come up with the name?  The name stands for Brittney, Owen, Sara (his mother) and Hayes (for his father).

Donnie’s wife Brittney relocated to Georgia from the Midwest and the two of them were married on October 1, 2016.  Fast forward a couple of years and they welcomed their daughter Paitlynn into the world, who will turn three this year on May 26.  Donnie and his family, as well as his company, are located in Leesburg, GA where Donnie grew up with his parents, Jimmy and Sara.

The pictured truck was purchased gently used from the original owner in April of 2019 and is a 2018 Kenworth W900 glider with a CAT 3406E under the hood, an 18-speed transmission, 3.36 rear gears, and a 282-inch wheelbase.  Sometimes it is the little changes that make all the difference, like a 20-inch Valley Chrome bumper, Hogebuilt half fenders, stainless step boxes, Phoenix light panels, and 7-inch Lincoln Chrome stacks.  The truck also sports an RLK Services drop-down visor, as well as custom work by RLK, including the changing out of the Kenworth cab lights to watermelon-style cab lights, custom blind-mount fender brackets, front and rear breather panels, a sleeper window visor, and chopped breather lids.

This year marks 15 years since Donnie started driving and the company currently runs a total of three trucks.  Donnie’s black W900, his father’s red 2021 Kenworth W900, and Donnie’s other driver Bo Tucker’s truck, which is a black cherry 2018 Kenworth W900.  Today, you will find Donnie hooked to a 2021 East end dump purchased from Pinnacle Trailers out of Wilmington, NC, while the other two trucks pull 2021 MAC end dumps, which were purchased from Southeastern Pneumatic out of Ellaville, GA.  The trucks haul mostly rock, glass, and fertilizer around the Southeast and the Midwest.  Rush Truck Center out of Tifton, GA does all of Donnie’s major engine work, while any other maintenance or repairs are done by Donnie and his father.

To date, Donnie’s favorite memory of trucking was his first trip to the Pacific Northwest, hauling from Albany, GA to Ferndale, WA.  He said it was an amazing experience plus, since it was in the fall, he was able to see all the fall colors in each state, there and back.

I asked Donnie if there was any advice he’d give someone regarding buying their own truck and he simply stated to save your money and to have at least a few months of running cash in the bank, just in case, to cover expenses.  He also recommended against doing any kind of a lease-purchase, recommending instead that someone should either buy a truck themselves or have someone cosign, if needed.  For him, he said, that is the best advice to get your credit going in the right direction.

I normally like the opportunity to scout locations prior to photographing a truck, but in this instance, like so many other times when I travel to areas I am unfamiliar with, it is fly by the seat of our pants.  As I was about a half hour away from their shop, I spotted a concrete pad up against some woods, plus a place I didn’t catch the name of, which both looked like potential locations.

At the shop, we were able to take photos on the dirt road their shop is located on.  We did in fact go to the two locations I spotted, with one place being the South Georgia Cotton Gin and the other, the entrance to the woods, which was just long enough for Donnie to back in off of the highway.  Lastly, we left to head east out of Leesburg to Hwy. 300, which is a four-lane road, so I had the opportunity to get some rolling shots before I continued my way back home.

Donnie’s father Jimmy, who has been his mentor since he was a little kid, with both trucking and life, has gone through a lot over the years, beginning with two back surgeries in 2003 from all the manual unloading of car tires he had done since 1991, hauling out to Texas.  The first day Donnie went trucking, Jimmy had to have triple bypass surgery, then, on Father’s Day weekend of 2017, he had a stint put in his heart.  Last year in September, Donnie’s dad was also diagnosed with an aneurysm, which took him off the road until earlier this year, when he was finally released to go back to trucking.  Donnie made the decision to purchase a new truck for him (the red W900) as the last truck he will drive until he retires.  Donnie wanted to be the one to buy him his final truck and is honored to have been able to do so.

Special thanks from Donnie goes out to his father for always pushing him to be the best he can be – in business and in life.  He taught Donnie the old school way of things from working on his own equipment to being the driver he is today.  Also, thanks to his wife Brittney for her support, understanding, and not giving him a hard time about trucking.  Lastly, thanks to his mom for her guidance all the way, for being his rock, and for keeping all his paperwork straight. Thank you to Donnie and his family for the warm welcome and the time so that I could come out to photograph the truck.  We not only had none of the forecasted rain, but we also enjoyed our visiting and had great conversations, as well.  Being an owner operator from the get-go isn’t always the choice for some people, but for others, it is a goal set from early on that is made possible through hard work, long days, and the grit to succeed.  As always, to all the drivers out there doing the deal, truck safe.