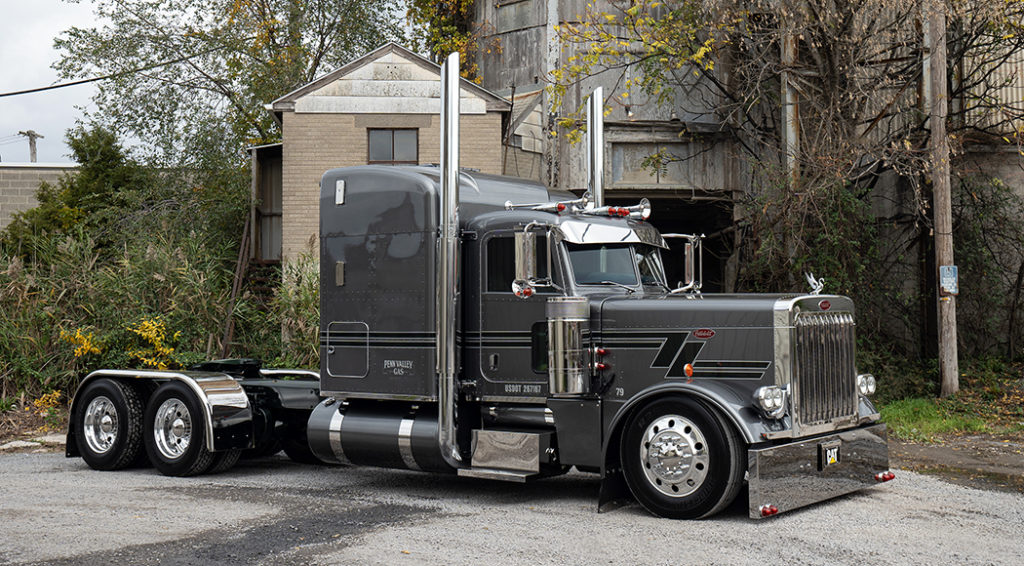 Not everyone is born with a silver spoon in their mouth – some come from humble beginnings.  Doug Kratz (52), the owner of this beautiful Peterbilt 379 featured here, comes from the latter, and some of his earliest memories involve trucks.  Doug’s father was a truck driver for 55 years, so trucking runs in their family blood.  His earliest memories of trucking were riding along with his dad, including hauling pigs for V&J Derstine and beef for Moyer’s Packing Company (MOPAC).  He recalls spending lots of time at the V&J shop, where his father’s friends also kept their trucks.

While in school, Doug became friends with Dwane Balmer, whose father owned and operated Penn Valley Gas (their Peterbilt 359 was featured in our February 2020 issue).  From that point on, Doug would spend a good amount of his Saturdays at the Penn Valley Gas facility doing whatever he could.  “In August of 1986, I got my license, which at the time was called a Class A License.  I was then grandfathered into the CDL era,” Doug explained.

Learning to drive in a White, which Doug used to back trailers into docks, Penn Valley had a 1971 GMC Astro and a 1975 IH Transtar, which Doug drove around on weekends, during wash time.  The first truck Doug drove on the road was the Astro, and the first truck Doug got paid to drive was a 1974 GMC.  During high school, Doug drove the White for Rosenberger Cold Storage in Hatfield, PA.  This is where he learned the basics of driving and honed-in his backing-up skills.  Rosenberger’s was gracious enough to give Doug a driving job once he acquired his license.

After a year at Rosenberger’s, Doug began driving a dump truck and, eventually, a Peterbilt tractor with a lowbed.  After this, Doug took a job with Atlantic Moving, based out of Hatfield, PA.  Atlantic moved household goods, and this was his first time running longer distances.  After a few years at Atlantic, Doug started pulling a reefer trailer for Sandford Alderfer Transport.  Doug had the itch to buy his own truck, so after his fourth year at Sandford Alderfer, he purchased a 1986 Kenworth T600 and leased onto Schneider National, running out of the rail yards in Philadelphia and Bethlehem, PA.

In 2000, Doug joined the Penn Valley Gas team again and sold his T600.  Doug got the itch to buy his own truck again and, after seven years at Penn Valley, he purchased a 2003 Kenworth W900L and a 48’ Fontaine step deck, which happened to be the first trailer he ever owned.  After purchasing the truck, he leased on to Lanita, saying, “The Dillers are great people and have helped me tremendously.”  Doug later sold the 2003 W900L Kenworth and step deck and purchased a 2012 W900L and a 52’ Reitnouer step deck.

In 2013, the northeast part of the US got hit with some bad winter weather.  Penn Valley reached out to Doug to ask if he could help run propane for the rest of the season.  Doug agreed, and that’s the way it has worked out for the last eight years.  Doug says it’s nice to not throw tarps in the wintertime!

The truck in these photos is a 2007 Peterbilt 379.  Doug purchased it from his friend after it was heavily damaged in a wreck.  Since he knew the history of the Peterbilt, he decided it was worth fixing.  The truck was originally black with a small flat top sleeper, but as the photos show, it’s now been completely transformed.  Since the last three trucks Doug owned were Kenworths, he decided to switch it up and go with a Peterbilt.  “The 379 is my favorite Peterbilt, even though I respect the 359 and the 389,” says Doug.  The truck has a C15 Cat backed by an 18-speed transmission and 3.36 rears on FlexAir with 24.5 low pros.  The truck has a J. Ferrell Custom Trucks air ride front end kit on it, as well.

As far as paint, Doug wanted to go with a lighter color, so it is easier to keep clean.  As he put it, washing has become a little more of a chore with his age, compared to when he was 18 years old, when he couldn’t get enough of it.  The gray is Ford Sterling Grey Metallic, which Doug saw on his brother-in-law’s Explorer at church on a Sunday morning.  The body of the truck is finished in the gray, while the stripes, suspension, and frame are finished in Cadillac Dark Evergreen Metallic.  Doug has always loved Cadillacs and fell in love with this color (he also wanted to be a little less traditional with this paint scheme).

Although this color combo was a bit of a risk, since he had nothing else to really compare it to, but Doug believes it paid off, which I fully agree with!  He didn’t want the stripes to be too bold and overpower the look of the truck.  Doug ended up using ZZ Top’s album covers as an inspiration for the design of the stripes on the truck.

Dallas Good of Good’s Truck Service was totally on board with the paint scheme and replicated Doug’s ideas perfectly.  He wanted the truck to have a mid-90s feel with some of today’s modern touches.  Anthony Gisondi of Trinity Kustomz, located in Souderton, PA, did almost all the fabrication and repair work, except for a few pieces.  While the truck was being rebuilt, Doug had Good’s Truck Service rebuild the new-to-him standup sleeper, as well as do some other body repairs.

The truck was always intended to be a work truck, so there aren’t too many custom pieces on it.  However, Doug really likes the three-position 389 Ferrell air ride, as well as the 63” stand up sleeper with a low roof cab and the body mounted mirrors.  “The paint is absolutely amazing, as well as the repair work and fabrication,” Doug went on to say.  Doug can’t say enough about both of the shops involved, saying, “The quality of the work by both shops is what I’m most happy about.  The truck is nicer than I ever intended, and I love it!”

A project like this always involves a lot of people.  Doug would like to thank Anthony and the entire team at Trinity Kustomz for their workmanship, quality, attention to detail, and updates regarding progress or any problems.  Thanks also go out to Dallas Good and his entire team at Good’s Truck Service for turning his vision of paint into a reality, along with Penn Valley Gas (especially Dwane Balmer), and Lanita Specialized in Mt. Aetna, PA (especially Scott Diller) for keeping him busy and profitable, their friendships, and putting up with him.

Rounding out his list of thank yous, Doug would like to thank his wife Marice who has put up with all things trucks for the past 31 years they’ve been married, and credits her love and support for any and all of the successes he has enjoyed.  Lastly, praise to Jesus Christ, our Lord and Savior, for without whom none of this would exist or matter.

As a side note, I would like to thank Ray Beaver of Eureka Stone Quarry, Inc. for allowing us access to their pit for part of our photo shoot.  The quarry provided a different and unique backdrop for the rig.  We also used a few other locations, both the day of the shoot and a few days after, to make sure we had everything covered.  I’d like to thank everyone else for their hospitality and letting us use their properties.

I would also like to thank Doug for allowing me to photograph and write about his outstanding Peterbilt 379.  Coming from humble beginnings, Doug Kratz is a super guy with an amazing truck, and I congratulate him on all his humble accomplishments.

1000 point test 2021
These Are the LEAST (and MOST Safe) New Trucks You Can Buy Today!
Rola Wörgl Austria
2020 Jeep Gladiator Off-Road Pickup: Here Is Everything You Need to Know!
2017 GMC Sierra eAssist Hybrid: Everything You Ever Wanted to Know