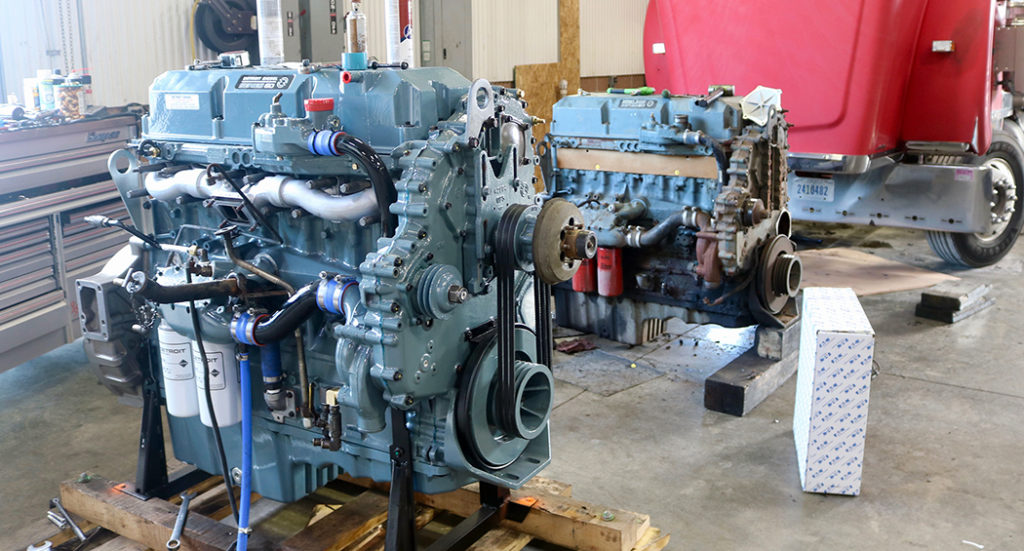 Even though the Detroit Diesel Series 60 was discontinued in 2011, it’s still one of the most common engines for Class 8 trucks.  Some may not know about the fascinating story behind these engines.  At the onset of WW-II, General Motors created the GM Diesel Division in 1938 to build engines that would support the war effort.  Their first engine, the Series 71 2-stroke engine, was used in tanks, generators, and construction equipment during the Second World War.  After the war, Detroit kept producing the Series 71, along with the new Series 53, for on-highway use.  Detroit’s engines were so popular they had over 40% of the market share in the early 1970s.

Unfortunately for Detroit, in 1976 Cummins introduced the 855 Big Cam, which was a more technically advanced 4-stroke diesel engine.  The Big Cam was also the first engine to meet noise and pollution standards of the day.  The old Series 71, having originated in the 1930s, was loud, smoky, and fuel hungry.  Detroit knew they had to design a world class engine to compete, especially since their market share was now less than 5%, so they began developing the Series 60 in the 1980s with the target of being fuel efficient, reliable, and clean enough to meet emissions.

Making its debut in 1987, the Series 60 was a clean sheet design that applied all the latest available technology into it.  Most notably, it was the first computer-controlled diesel engine.  This Detroit Diesel Engine Control, or “DDEC” system, meant that drivers could get real-time system updates, diagnostic features, and horsepower could be increased with a computer instead of wrenches.  Although it was smaller than comparable CAT and Cummins engines, at just 12.7 liters, with the right tuning it could embarrass those larger engines in an uphill pull, all while returning impressive fuel economy.  Steve Kron, a longtime customer and fuel mileage fanatic, has managed to get between 9 and 10 MPG from his old 12.7, which is equipped with our tune, manifold, and performance turbo.

Although these engines are about 20 years old now, parts are affordable and plentiful because Detroit is still producing parts for these wonderful engines.  They provide everything needed to keep them running, including fully rebuilt crate engines.  We’re also still rebuilding these engines and can provide a more personalized build to suit your needs.  Every one of our engine rebuilds involves balancing the pistons and rods (a rare practice these days), which will ensure your engine will be running smooth for many years to come.  These days, we’re working on the newest series of engines from Detroit and Cummins, but we still provide the full range of service for legacy engines like the Detroit Diesel 12.7 Series 60.

Ethan from our engineering department has mastered ECM tuning on these early computer-controlled engines like the Series 60, the Cummins N14 Celect, and Celect Plus.  Because these computer systems are relatively simple, we can provide ECM tuning for these engines at a reasonable cost of $650 for a factory upgrade or $1,450 for a custom tune.  In addition, we can tune them from any one of our remote locations across the U.S. and Canada.  Just visit the “Remote Tuning” tab on our website (www.pittsburghpower.com) to see the map of available remote tuners.  We have the capability to tune some of the newest engines from Detroit, but some of them will need to be done at our shop in Saxonburg, PA.  Please give us a call to find out if we can tune your engine remotely or not.

The majority of the tunes we install on the 12.7 Detroit Series 60 is 500-hp to the ground, which is 588 flywheel horsepower.  We also have a custom 580-hp to the ground tune, which equals 682 flywheel horsepower.  The ECM can also be programmed for two horsepower settings – all you have to do is flip a switch.  However, this is not as popular as the single horsepower setting option.  Most truckers that have two settings say they never use the higher setting.  The engine runs so good on the lower setting, they just keep it there, especially when equipped with the Pittsburgh Power manifold and turbo.

The stock manifold and turbo on a 12.7 DDEC4 are very small and restrict the exhaust flow.  There is a reason why a performance gasoline engine has a larger intake manifold, carburetor, and exhaust headers.  It’s all about increasing air flow for the intake and exhaust.  The diesel engine needs the same.  Many times, on the dyno, we see an 80 horsepower increase with just the exhaust manifold and turbo, especially on the 3406 and C-15 Caterpillar engines.  All of the ISX and X15 Cummins engines benefit from the Pittsburgh Power exhaust and intake manifolds.  It’s all about timing fuel and air flow to enable the engine to perform, deliver good mileage, and have a long life.

Many of you are now regularly using our Max Mileage FBC, and we’re working hard to make buying the catalyst more convenient than ever.  We have a large dealer network, including most DPF Alternative locations, where you can also sign up for their lifetime DPF warranty.  We also have over 600 subscribers in our subscription program.  You save money with free shipping, and it’s very convenient having Max Mileage just arrive at your doorstep.  If you live in Canada, we have 23 dealers for you there.  From Nova Scotia to British Columbia, we have you covered.  Our dealer Brad Richmond in B.C. will ship you Max Mileage with his own subscription program.  Just visit Brad’s website (www.maxmileagecanada.ca).  Brad also travels along the west coast down to Vancouver and Seattle, so please give him a call if you’re in the area.  He always has some catalyst in his truck.

For Your Health
The Great White North
Be Confident In Yourself
Craig Isaac – Truckstar Festival 2015
Check Engine Lights & More!