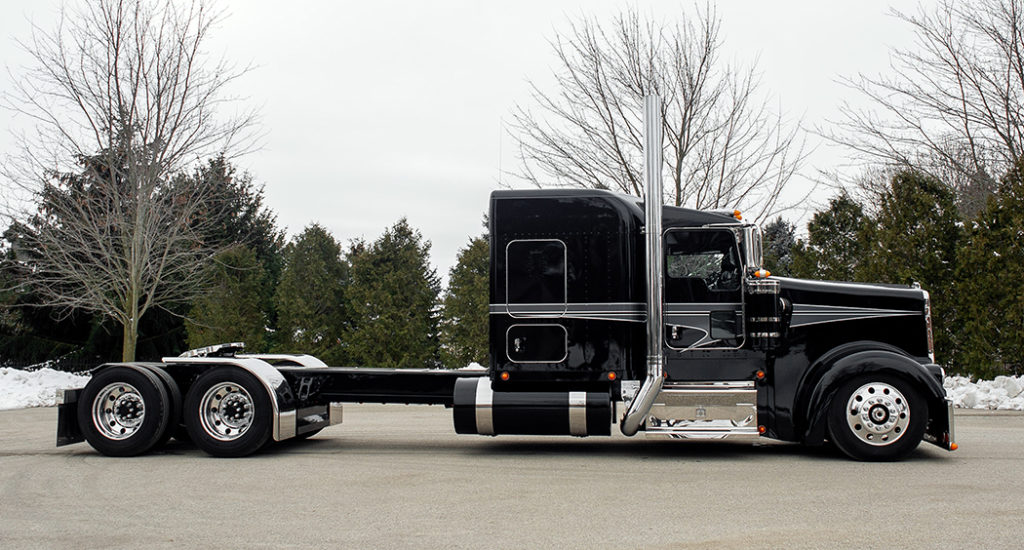 Most of you probably know that 12 Ga. Customs out in Ontario, Canada, makes some of the coolest big rig truck accessories available, but what you might not know is that they have built a lot of amazing custom glider kit trucks over the years, as well.  Unfortunately, thanks to current government regulations regarding truck emissions, gliders are no longer available for purchase from the manufacturers.  The sweet black KW seen here is one of the last gliders the company built and sold, and it was just too good to pass up doing a feature.

The 2020 Kenworth W900L glider was ordered in 2018 with a 72” mid-roof sleeper and a 305” wheelbase.  After the truck was delivered in 2019, it took 12 Ga. about a year to complete the project.  Built with a specific customer in mind, when it came time to deliver the truck and close the deal, it didn’t pan out.  This left 12 Ga. with a cool company mascot, and they enjoyed driving it around town, using it for promotions, and even took it to one truck show in Canada in 2020, where it won a bunch of awards.  At that event, Pete Wiebe, the owner of Tricorp Transportation, a Toronto-based trucking company with 34 tractors and 54 trailers that specializes in expedited freight between Toronto, Canada, and Dallas, Texas, really fell in love with this truck and decided to buy it.

No stranger to doing business with 12 Ga. Customs, Tricorp has bought several black glider trucks from them, including a tricked-out black 2017 “Flat Glass” W900 with a 42” sleeper, a 280” wheelbase, a CAT 6NZ engine, and an 18-speed transmission, which was taken to a few truck shows, where it did very well.  This first truck, of course, was also decked-out with tons of 12 Ga. goodies and custom parts.  The driver of that 2017 KW, Dave Parker, just happens to be the lucky driver that will soon be behind the wheel of the 2020 Kenworth featured here.  When Jeff Battler, the owner of 12 Ga. Customs, sold the truck to Tricorp, one of the stipulations was that they had to use it, saying, “If it is just going to sit and do nothing, it can stay here with us and do that!”

Opening their doors in 2002, 12 Ga. Customs owner Jeff Battler used to be a truck driver that ran to California before starting the accessories business.  Jeff was always trying to upgrade his truck and make it stand out from the rest, but he could never find the parts he was looking for – so he started making his own stuff.  After helping build a truck for First Class Services to compete in the 2008 “Big Rig Build-Off” held at the Mid-America Truck Show in Louisville, Kentucky, that stellar copper-colored 1986 Peterbilt 359 won the competition and really put 12 Ga. Customs on the map.  Today, with 45 employees, 12 Ga. sells a wide array of parts and custom truck accessories through a vast network of dealers across all of Canada and the United States.

One of the more known employees at 12 Ga. is Jim “Higgs” Higgins.  Jim has been with the company for over ten years now and is involved in sales and oversees design and customizations of builds.  However, “Higgs” is also very well-known for his photoshopped truck creations and unique stripe schemes – he can take a picture of any truck and then digitally customize it, adding accessories and different colors, creating a virtual mock-up of what the truck would look like when completed.  Many people do it now, but Jim was one of the first, and his creative stripe designs are highly sought after (and copied) by many people in the trucking industry.

Working together to complete the build of this 2020 Kenworth, Jeff, Jim and Al MacDougall, along with plenty of help from Gord Crawley, George Silva, Jeff Shiell, and Matt Hollier, got it done.  In the end, this rig has a long list of custom parts, so I will do my best to mention as many as I can here.

First things first, the guys at 12 Ga. installed the highly customized and painted CAT C15 2WS crate motor, built by PDI, along with a painted-to-match 18-speed, hooked to 3.42 ratio rears.  The engine, which boasts between 650 and 700 hp, has a complete chrome dress-up kit from PDI, as well.  Sitting on 24.5 low pro tires, the front end features a 12 Ga. air ride system and a 20” Texas-style bumper with a 12 Ga. lift kit.  The stock hood was swapped out with an A-model style hood from Jones Performance, and then fitted with Trux headlights.

Some of the major modifications included removing the four small stock air tanks and relocating two larger tanks behind the fuel tanks, which also allowed for the addition of oversized custom battery box covers with billet step plates, shortened (and painted) fuel tanks with aircraft style flush filler caps and stainless straps, frame skirts to hide underglow lighting, and smoothed-out frame bolts.  Stainless deck plates were added behind the sleeper, along with 4” flush-mount lights, and a custom frame “scoop” to hide the gap between the frame and back of sleeper.  The truck also got a custom differential cover panel, a stainless rear light bar with the lower section painted to match the frame, and the end of the rails and crossmember were cut and customized to allow the air-line hookups to go out the rear of the truck.

With exterior lights you can see, hidden underglow lights, custom lighting throughout the cab and sleeper, and more under the hood and on the firewall, this tractor has upwards of 200 lights – and many of them have been recessed into the body panels!  These recessed or “frenched in” watermelon lights were achieved by cutting “pockets” into the cab and sleeper drop panels, the stainless air cleaner brackets, the back of the bunk, the custom fuel tank “I” panel, the one-off firewall cover, and the lower part of the rear light bar, then completely custom welded and polished sealed light assemblies were installed in the pockets.  It was a very labor and time intensive job, but it really gives the truck a unique look – that I really like!

In addition to those modifications mentioned, the truck was also fitted with Hogebuilt half-fenders, a 12 Ga. grille with seven KW-style grille bars, 8” Dynaflex exhaust with factory-style elbows, painted Vortox air cleaners, stainless 12 Ga. mirror brackets, and a 12 Ga. tapered stainless bowtie visor.  Initially, the truck was just plain black, but when it became a 12 Ga. truck, they added two off-brown colored vinyl stripes, designed by Higgs, which looked really cool.  After Tricorp purchased the truck, they switched the color of the stripes to charcoal gray for them.  Not really being a company with “striped” trucks (most are just plain black), the folks at Tricorp decided they liked the stripes, and are now adding them to some of their other trucks, as well.

Ordered with a Platinum interior package, much of the upholstery inside is from the factory, however, they did a lot of custom work in there, too.  Inside, the cab and sleeper doors were removed so the frames could be polished and the edges could be capped with stainless, a custom (painted) one-piece floor was installed, and a one-off stainless steel overhead console was added, along with billet interior door handles and grab handles, and Lifetime pedals.  The truck was also fitted with a 1,000-watt stereo system with (2) 12” subs mounted in a custom-built box, a Stryker 650 CB, all chrome gauges, a custom shifter with hidden air lines, an extra dash panel with eight added auxiliary switches, and Bostrom Pro Ride seats with stainless covers for the floor brackets.

Before the truck was delivered to Tricorp, the guys at 12 Ga. hired Dave Levitt, a professional car photographer, to take pictures of the truck (the ones you see here).  Choosing a unique location about ten minutes from their shop in West Montrose, Ontario, Dave captured many stunning shots in front of a covered bridge built in 1880.  One of the oldest bridges in all of Canada, it was also one of the locations used by film director and producer Stephen King when filming “IT” – his 2017 horror movie about seven children that are terrorized by an evil clown named “Pennywise” that dances to attract its young prey.  We would like to thank Dave Levitt for allowing us to use these pictures for our feature – you did a great job.

Although Pete at Tricorp has just been enjoying looking at the truck (and listening to the stereo) in his shop throughout the winter, it is now being put on the road, where it will be hauling LTL freight between Canada and Texas, like the rest of their trucks.  I enjoy nothing more than seeing a truck that is almost too nice to use being used and can’t wait to see it out on the road and (maybe) at some shows.  Our hats go off to everyone at 12 Ga. Customs for building such a fine ride, and for helping to keep trucking fun and cool.  We can’t wait to hear how good “Back in Black” sounds blasting out of those subs!