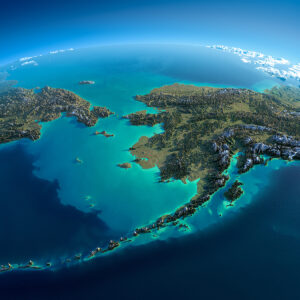 Between Asia and North America is a land bridge that was above sea level during the Ice Age called Beringia.  This land bridge connected Siberia to Alaska and is thought to be (by some) how the first people came to North America about 30,000 years ago.  There are fossil remains that shows us that at one point in time the bridge was above water.  The theory to the migration was a normal part of life: first the lichen, moss, and plants appear, then the plant eating animals came to the feeding grounds, and finally tribes of men follow the animals as a food source.  But it did not happen overnight.  This took millions of years to transpire.  The Ice Age brought huge glaciers to the area and sculpted the land mass and lowered the sea level by approximately 400 feet.  How did the sea level drop so low?  It is because most of the water was frozen in the glaciers.  Nature works slowly, as we are talking about a time period of 2,600,000 to 11,700 years ago for all this to happen.  The bridge did not start to appear until approximately 38,000 years ago, and then it took time for the land to become exposed.  This area is now named the Bering Strait.  The Strait links the Arctic Ocean and the Bering Sea.  The greatest land exposure was around 20,000 years ago.  The ancient people have left fossils dating back 18,000 years.  It is thought that these people traversed this area back and forth between the continents following the herds.  There is a theory that two major migrations took place to the North American continent – the first group of ancient people died out and a second group share DNA with the modern indigenous people of the Arctic.  It is amazing how much DNA has assisted scientists in learning more about the Earth’s history.  DNA has opened a new window into ancient history, even though the fossil record makes up only 1 percent of it.  Since we are only working with a minute part of the picture, there are other theories about migration, which include the rivers and the oceans.  There are many stories and theories, but as more DNA might be discovered, the theories may change again.  It is interesting to explore our history, but it reminds me of everyday life – you think you have the total picture in your mind then someone comes along and changes the channel.  That is life.  It seems the more we know, the less we actually know!

1000 point test 2021
Truckstar Festival 2012 – DecibellenContest Finale #V8power.nl
2020 Jeep Gladiator Off-Road Pickup: Here Is Everything You Need to Know!
Our Epic Ford F-150 Lightning Alaska Trip Is On! Check out Day 1 & 2
The New VW California Is The Coolest Van You Can’t Buy & Here’s Why!