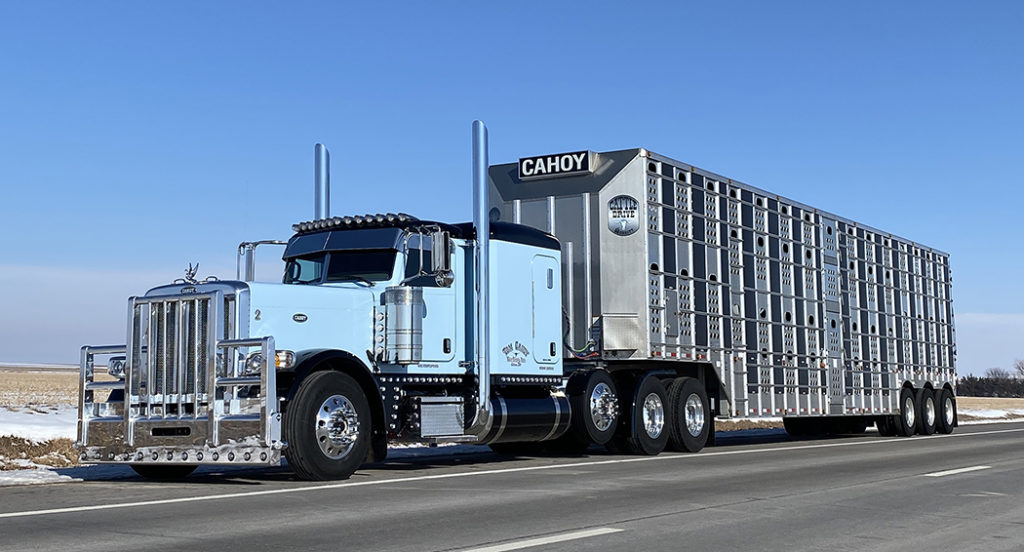 This month’s cool creation was built for Will Cahoy (22) of Colome, SD – because when there’s a Will, there’s a way!  This young kid is often underestimated because of his age, but I found him to be respectful, well spoken, and not afraid to work.  And those are the attributes that will get you a brand-new custom Peterbilt at the age of 22.  Married to this new ride, Will joked, “She’s awfully quiet, but she’s bright!”

Will is the oldest of three children from Tom and Terri Cahoy.  Tom and Terri got married in 1995 and had Will in 1998.  Back then, they were farming and trucking.  Will has a younger brother, Wyatt, and younger sister, Westlie.  Will always knew he wanted to truck and began going on trips with his dad when he was still in a car seat.  When they got home, his mom had her hands full, because Will would be so wound-up.

After graduating from high school, Will went hay trucking for the summer, and then in the fall, he headed to college.  After one semester, he quit and went trucking full time, driving one of his dad’s trucks – a 2003 Pete 379 Extended Hood with a stand-up.  About a year ago, he purchased the truck from his dad and then kept driving it until he got this new one.  Getting a loan to buy it, the bank was already aware of Will because they had loaned him money to buy seven head of cattle when he was just a freshman in high school.  Today, he has almost 50 head.

One year later, Will decided he wanted to buy a new truck.  After a recommendation from a friend, he called me.  Will knew exactly what he wanted and had a vision in his head.  The rest, as they say, is history.  The new truck is a 2021 Peterbilt 389 with a modest 280” wheelbase, an X15 Cummins with 2,050 torque, and baby blue paint with a black top and black fenders.  This truck was ordered for Will with all the good stuff, and even has his name on the dash plaque.

When the truck showed up, Jared and Matt were assigned to the project.  Cody helped button things up, and Pat the painter made sure all the proper color got applied.  The truck got a swan and handles up on the hood, extra grill bars, 13 cab lights, stainless front and rear visors from Bub, windshield trim, and painted door chops.  Other additions include full functioning 7” Lincoln pipes, custom cab and sleeper skirts with 70 lights that match his cattle trailer, a refrigerator, a real train horn, 10 Dual Revolution LED lights on the back of the sleeper, breather lights, and a Merritt in-frame toolbox.

Inside, the dash and wood trim were all painted, and the driver’s seat was lowered.  After hiding the DEF tank, Pat painted both fuel tanks and the air tank.  Over the lift axle tires, painted fenders from Hills Stainless were installed with Pederson brackets, which allow the fenders to go up and down with the axle.  Painted Fisher aluminum half-fenders were added over the drive axles, and then Will installed a polished “Moose Gooser” on the front when he got home (thanks to Will for taking many of the pictures).

When Will showed up in KC with his brother and dad to pick the truck up, someone in the office mistakenly assumed it was Will’s dad that was there to pick up a truck.  Clint was quick to correct the person and apologize, but Will says it happens all the time.  Apparently, 22-year-olds do not get a lot of credit or respect from most people.  I had the same issue when I started selling trucks at age 19, so I could relate.  I asked Will what motivated him, and he said, “This new bank note, I guess!”  But, like he always says, “If there’s a Will, there’s a way” – and that statement definitely applies here.