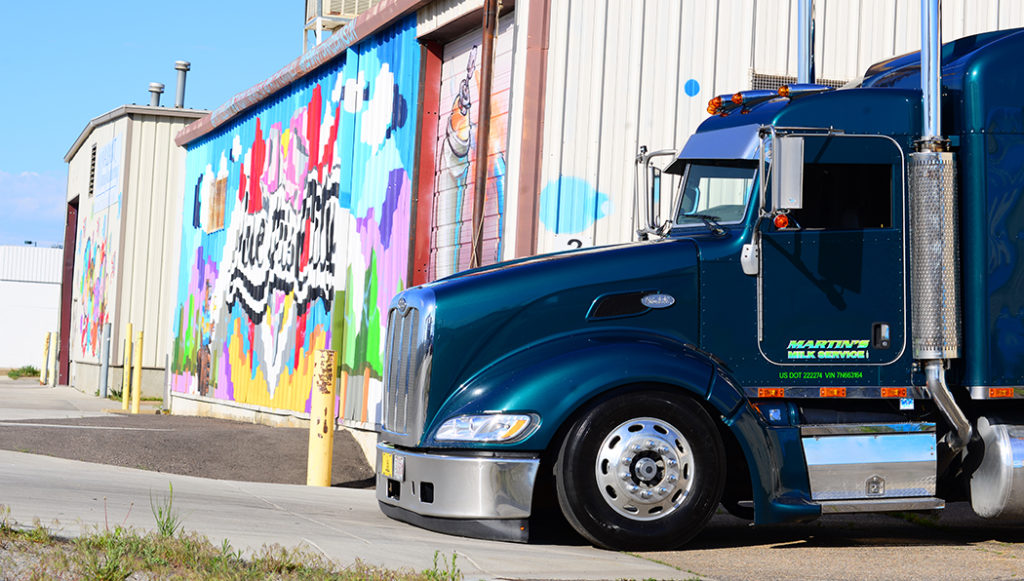 Shined up trucks with long hoods can be found just about anywhere these days, and for good reason – typically, they are great looking rigs.  But, what about the ones with a sloped hood, the anteaters, the aero trucks?  If the press towards more fuel economy and less emissions has shown us anything over the past decade, it is that the “hoovers” and “dust busters” can be just as cool and good looking as the classic long-hooded rides… they are a new class of rigs that are “aero cool” for obvious reasons.

At 38 years old, Patrick McFarlan of Wilton, Wisconsin grew up around trucks.  Spending his childhood first in Bridgeport, Connecticut, and then later Longmont, Colorado, Pat’s father Barry, now retired, was, as Pat puts it, “A full-time firefighter and a part-time truck driver.”  Pat spent his formative years around fire engines and similar equipment, getting a healthy dose of diesel fumes and big iron thanks to his father’s service to the community of Bridgeport as a full-time firefighter for the Bridgeport Fire Department.

After moving to Colorado, Barry had several truck driving jobs, including running a cement mixer and hauling for Westward Express.  After these shorter stints, Barry began driving for HVH Transportation of Denver (Longmont is just North of Denver) as a lease-operator.  With classically styled 379s evocative of the 1990s with low cab roofs, stand-up sleepers, and five-inch factory turnout stacks, Barry’s rides had plenty of style.  They were “factory custom” with all the factory stainless and polished aluminum one could get at the time.  Pat spent many trips riding with his dad in those classic ‘90s 379 Peterbilts.

Being around Denver in the 1990s and 2000s also meant Pat got to see a wide array of the aero trucks taking over the orders for fleets like Jim Bender and Navajo/Digby, with trucks like the T600 Kenworth, 377 Peterbilt and FLD Freightliner gaining significant market shares.  Though often meant with some degree of disdain by many veterans who had spent years driving the classic conventionals or, conversely, no hood whatsoever, the slippery designs of the aero trucks were not everyone’s favorite (still aren’t).  But they were coming, and now, they’re here to stay.

The late ‘90s and early 2000s were also a time when internet and computer games were gaining traction.  For many of us, much like Pat, hours could be whiled away looking at truck pictures on Hank Suderman’s website (which sadly no longer exists) or playing early truck simulation games like Hard Truck and Eighteen Wheels of Steel.  Online forums and later MySpace (and more recently Facebook, Instagram, Twitter, and other social media platforms) developed a huge subculture of young truck nuts waiting for their turn at the wheel.  Pat was one of these truck nuts, as was I, and chances are if you were born in the mid-80s or later and you’re reading this, you were, too.  In fact, it was the advent of widespread internet access that brought me to 10-4 Magazine almost twenty years ago.

Finally graduating from games to the real deal eighteen years ago, Pat obtained his CDL and then spent several years driving as a company driver, before taking the big leap and becoming an owner operator.  The ride?  The 2007 Peterbilt 386 pictured here.  Coming from the factory in Emerald Green effect with a full aero package, many might say the truck started as just another fleet truck.  Sitting on 252 inches of rail, Pat began making the ride his own while making a few bucks with it, as well.

Originally outfitted with a 13-speed Eaton, the truck now sports an 18-speed, mounted behind a 625-hp CAT tuned up by Severson Service of Lansing, Iowa, and turning 3.36 cogs.  With Air Ride by Horse up front and Peterbilt Low AirLeaf out back on tall 22.5 rubber, the truck has a “laid-out” appearance.

Pulling all the factory skirts and trimming the sleeper fairings, Pat also swapped to twin cab-mounted exhaust and added Hogebuilt quarter fenders and a rear light bar.  Other custom touches include an RLK visor, bullet cab lights, and 6×2 LEDs on stainless trim panels on the cab, sleeper, and along the deck plate.  Inside, the truck sports gray American Class interior, low-low midback seats, a billet steering wheel, a glitter shift knob, and a carbon fiber dash wrap (along with plenty of heavy metal and rock-related stickers).  Pat’s 386 is no slouch and shows how good “aero cool” can be.

With 2 million miles under his belt, over 1.8 million of which have been in this 386, Pat is no rookie.  Having primarily run refrigerated freight, mostly dairy and poultry for Martin’s Milk Service of Wilton, Wisconsin, Pat has also hauled open-deck and dry freight, as well.  Having recently taken a short hiatus from the owner operator lifestyle, this well-known 386 will be back on the big road very soon!

When Pat isn’t in the truck, you can often find him in the garage working on his 2000 Harley-Davidson Springer Softtail or his slammed 1983 Chevrolet C10 pickup.  If he isn’t working on these, you’ll find him at the shop working on his equally cool Kenworth T600A hobby truck.  All the rides have their own unique touches, which gives him a very cool stable!  Having recently bought a house, as well, Pat has been forced to test his skills as a handyman, too.  Hey, Pat, Congratulations on the pad!

The advent of the internet and its relation to trucking has profoundly changed the industry for us all, perhaps more for those like Pat and me, than the older generations.  It generated a much broader community across not just the United States, but the world, as well.  Getting to know, digitally, other young kids just as interested in trucks as you that lived half the world away, wasn’t unusual – and was fun, too.  We got to see trucks with totally different styles from many different parts of the country, and that eclectic mix of tastes and trends boded well for the latest generation of “aero cool” style, of which Pat’s 386 Peterbilt is a perfect example.

Pat would like to thank his mom Deborah and father Barry for their endless support, and his dad, specifically, for sparking his love of trucks early on with all the rides and time around trucks and fire equipment.  Pat would also like to thank his many friends in the industry, some going clear back to the days of the online trucking forums and computer games, for their (often smart-mouthed) help and support.  A special thank you, as well, to Martin’s Milk Service for the work and support as both an owner operator and company driver.

We at 10-4 Magazine would also like to offer our well wishes to Barry McFarlan, Pat’s dad, who successfully finished a recent round of chemotherapy, which has put his cancer in remission.  Congratulations, Barry!  We wish you all the best and good health.  Pat McFarlan and his 386 Peterbilt are great examples of how the next generation of veteran truckers can take these newer rides, although a bit different than the classic long hoods, and still make them “aero cool” and look just as good.