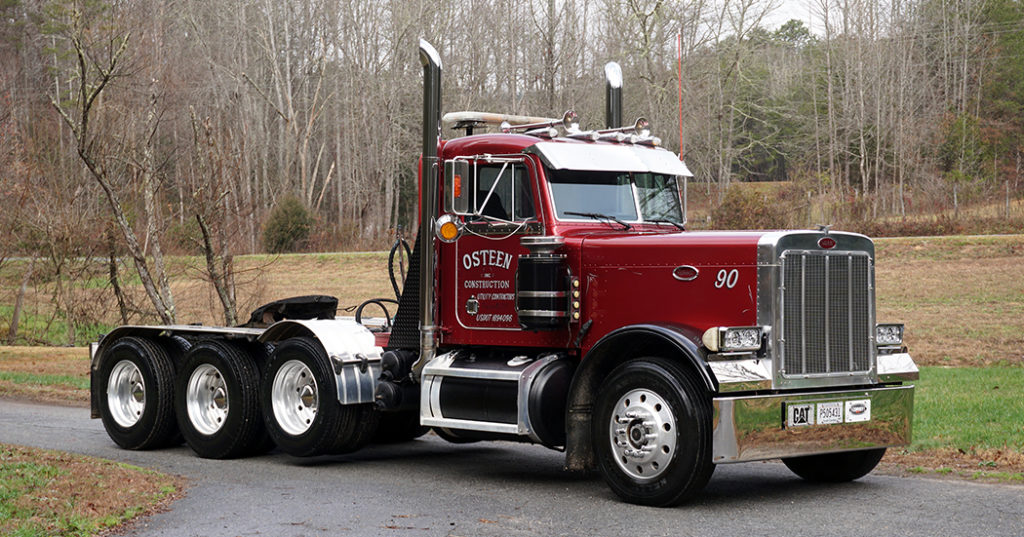 A passion for big trucks is not always instilled at birth or in your blood because you are the second or third generation of truckers in your family.  Sometimes, it is an ignited passion that occurs at a certain point in our lives, for no rhyme or reason other than maybe an opportunity presented itself, which was the spark needed.  This is exactly how it happened for Brad Osteen of Easley, SC – and now that passion is making its way to his Peterbilt 379.

Brad grew up in Taylors, SC as Bill and Linda Osteen’s eldest of two sons.  Brad wasn’t involved in trucking nor did he have family in the industry, but because of where he lived, down the road from a rock quarry, from the time he was a little boy, he was a truck nut.  His father Bill had worked at a municipality until deciding to start his own business in 1991 called Osteen Construction, Inc.  From then on, 13-year-old Brad began to realize that going into the business was what he was going to do.  Through the years, Brad worked part time on the weekends, until he came on full time at the age of 19.  Two years after going full time, Brad married his wife Allison on October 2, 1999.

Driving a commercial truck started prior to Brad obtaining his CDL, driving a dump truck on occasion, which started at around 17 years old.  In 2005, Osteen Construction purchased its first semi – a 1970 White – and six months later, Brad got his CDL.  As the company began growing, so did Brad’s family, as they welcomed their new daughter Lydia into the world in August of 2008.

Brad attended his first truck show in Cherokee, NC as a spectator and took a truck to a show for the first time in 2009.  He took the White that year, with the completed restoration occurring just three days before the ATHS National Show & Convention in Huntsville, AL.  He had someone set up to haul it to the show, but at the last minute, transport fell through, so he ended up driving it out there.  Though the time leading up to the show didn’t quite go as planned, what happened an hour into being at the show made up for it.  Brad was approached by a woman to have his truck photographed and an article written about him and the truck in a magazine, which is no longer in print, called Old Time Trucks.  Brad said it caught him off guard as he would have never expected having the truck
being noticed enough for an article.

The pictured truck was purchased in 2010 and is a 1999 Peterbilt 379 with a 425-hp CAT 3406B under the hood, 18-speed transmission, 4.33 gears, and a 240” wheelbase.  The truck sports 6” Lincoln Chrome stacks, a standard 18” bumper, and Trux Accessories LED Projector headlights.  It has definitely seen some changes, with the most noticeable being the paint job, from white to red, done back in 2012.  95% of the time you will see this truck pulling a 2008 Talbert 55-ton lowboy.  The entire restoration of this truck was pretty much all completed in-house.

Today, 43-year-old Brad and his family reside in Easley, SC.  Allison works as a Commercial Loan Assistant at a bank and Lydia, now 12 years old, enjoys riding in the trucks with her dad whenever she can, but she is showing great promise as a talented artist and writer.  Brad and Allison completely support her and continue to push her to chase that artistic passion.

The 1970 White is still alive and well and will never leave the company.  The White is basically retired, but is capable of being a spare truck, should the need ever arise.  The newest truck to the fleet is a 1979 Peterbilt 359, which is a side project that won’t be going to work but will enjoy a retired lifestyle.  The 379 Peterbilt seen here continues to earn her keep, and Brad keeps her looking good wherever they go, including a few truck shows, when possible.

The company has grown quite a bit over the years.  As a utility pipeline and grading contractor, they work in all areas of northern South Carolina, from the Georgia line to the North Carolina line.  The company started out with just a backhoe, one dump truck, and one small track hoe doing mostly local and small jobs.  With the growth of their company, it also showed growth in the equipment they have, which includes an excavator, wheel loaders, rollers, a bulldozer, a backhoe, skid steers, five equipment trailers (including two lowboys), one semi-truck, one dump truck, two F550s and an F250.  Not only is Brad busy full-time at the company, but he is also the chapter president of the Palmetto Upstate ATHS Chapter out of SC.

I asked Brad what he liked most about being involved in the truck shows he goes to and he said he hasn’t met anyone he didn’t like at any of the shows he has attended.  He loves being around the people, the trucks, and being able to share and hear stories of trucking.  He also said that it is so nice meeting new people with shared interests.

Brad was also willing to share some advice to anyone looking into owning their own construction company, saying, “You always have to have some running money.  Customers take a certain number of days to pay, but your own bills are still going to keep coming, even if you have not been paid for a job yet.  A person needs to be willing to work long hours, get dirty, and learn to be their own mechanic, driver, and machine operator.”  He went on to say, “Owning a business takes up a lot of time and if something breaks, you continue working all day, and then your nights are spent making repairs or doing maintenance to keep everything running smoothly.  You will inevitably get home late almost every night and you will come home to your family tired, ill, and hungry.”  Brad also stated that he tries to be as self-sufficient as possible.  If he doesn’t know how to do something, he will learn, to make sure he can do it the next time on his own.

Special thanks from Brad to Mike Nealey and the late “Porky” Lusk for their help and teaching with rebuilding the engine for this truck, and helping with an engine rebuild in the White, as well.  Also, thanks to Mark Laws for the paint work and, most importantly, to his wife Allison for her unwavering support and understanding of all the late nights and weekends working on trucks.

Thank you to Brad for his time with photographing the truck and the time in conversation to write this article.  We were fortunate to not have to travel too far for photos, as he lives in a beautiful area.  We drove up and down the hill on Highway 25 north of Greenville, SC to get the rolling shots, and then were able to utilize the area around their long driveway into the shop for the remaining photos.  We were a bit concerned about the weather, considering it was supposed to rain hard the evening before, but we lucked out and only had to deal with a little fog that morning.

I always enjoy hearing about the process of someone’s vision for a truck and then seeing the final product, like this heavy-haul Peterbilt 379.  I wasn’t as young as Brad, but I am definitely able to relate to Brad’s ignited passion for trucks, because I came into this same passion by a fluke job opportunity and the rest, as they say, is history.  As always, to all the drivers out there doing the deal, truck safe.