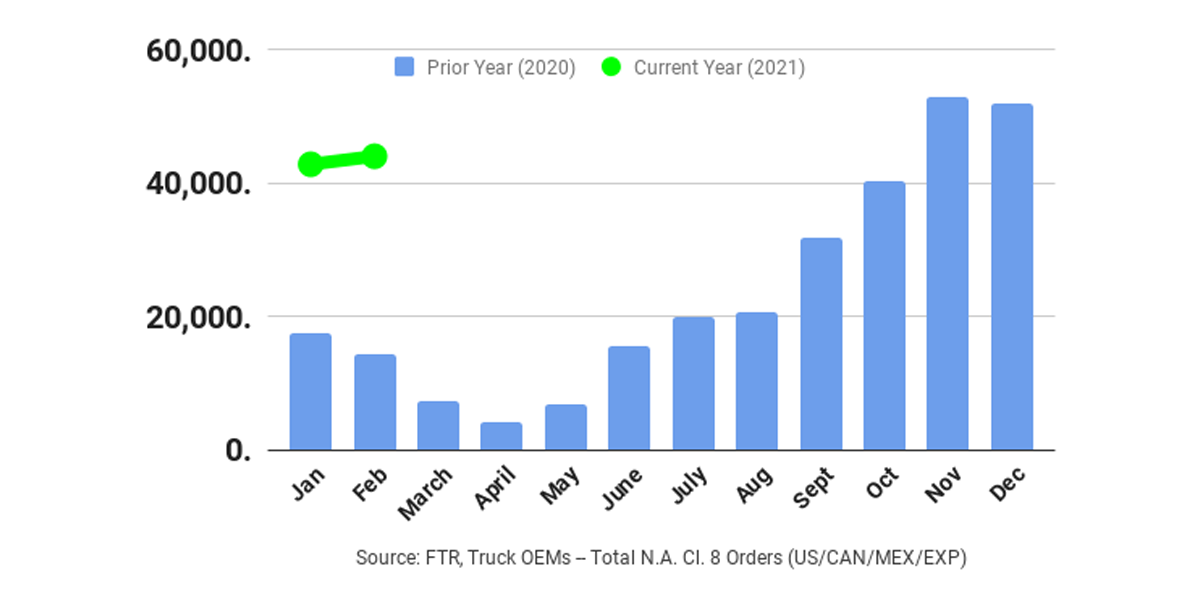 Preliminary North American Class 8 net orders remained impressive in February for the fifth consecutive month coming in at between 43,800 and 44,000 units, up between 3% and 4% compared with January orders, ACT Research and FTR reported, respectively.

February was the second-highest total ever for the month of February. Orders for the previous twelve months now total 338,000 units, FTR reported.

There is intense pressure on freight hauling capacity to get more trucks into service. However, the supply of new trucks is limited due to component and part shortages. In response, fleets continue to place orders in elevated volumes to try to acquire as many tractors as possible, FTR officials reported.

“There is tremendous pent-up demand for trucks. There are severe bottlenecks in the supply chain involving computer chips, wiring harnesses, and a whole host of various parts. OEMs are under intense pressure to deliver as many vehicles as they can, as soon as they can,” Don Ake, vice president of commercial vehicles for FTR.

“The supply chain is so dysfunctional right now and there are so many parts affected, it is difficult to predict when the logjam breaks loose. The vaccine should help component manufacturers find more workers. There are also lengthy waits at the ports causing delays in imported parts,” he said.

“The shift in consumer spending from experiences to goods continues to support providers of local trucking services, as e-commerce has grown by leaps and bounds in the pandemic economy,” Act Research President and Senior Analyst Kenny Vieth said in a press release.

2017 GMC Sierra eAssist Hybrid: Everything You Ever Wanted to Know
Rola Wörgl Austria
The New VW California Is The Coolest Van You Can’t Buy & Here’s Why!
2020 Jeep Gladiator Off-Road Pickup: Here Is Everything You Need to Know!
Truckstar Festival 2010 Fleurs v.d. Eijkel Uittocht