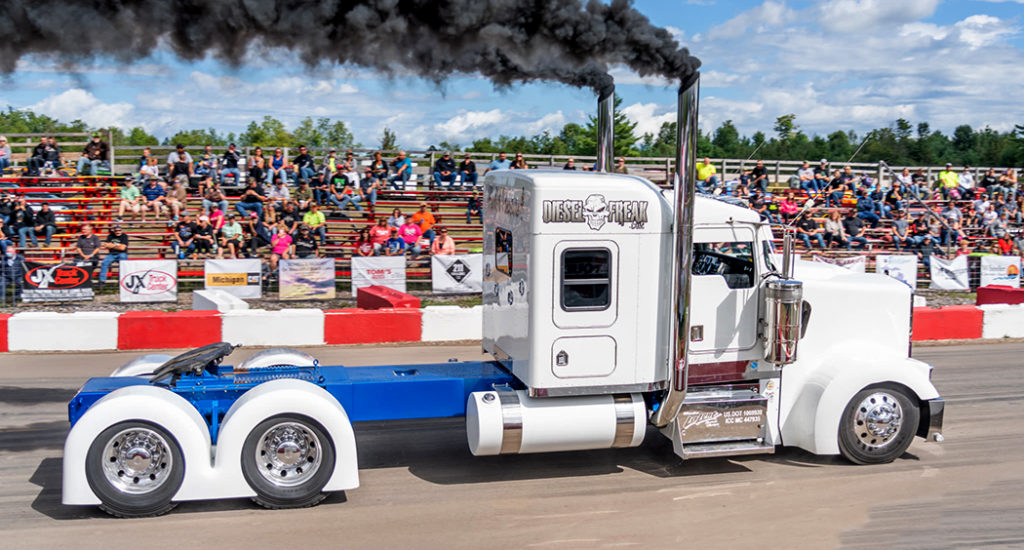 Some trucks in the industry are popular for their color scheme or their complete look at a show, but for Wade LaLone, owner of a white W900 called Foolish Pleasure, it is not only the look, but the black smoke and endless power that the truck brings to the table.  I met Wade for the first time at the beginning of December in 2016.  At this point, I didn’t know about his white Kenworth, I just knew Ryan and Wade LaLone from Diesel Freak and, thanks to Evan Steger of Evan’s Detailing and Polishing, I had the opportunity to meet them in person at a gathering in 2016.

Born and raised in Rosebush, about an hour north of Lansing, Wade is a Michigan native.  He said, while growing up, there was never a time he didn’t think about getting into trucking, and he couldn’t wait to be done with school so he could drive full time.  His grandfather, Morval LaLone, started the trucking company, MLT, Inc. (Morval LaLone Trucking, Inc.), and drove clear past his retirement until his age would not allow his trucking career to continue.  Wade’s dad Reg and his siblings took over the trucking company but dispersed in different directions of the industry as time went on.  As soon as the grandkids (including Wade) were out of diapers, their daycare was in the cab of a truck.  Wade’s grandma’s brother had a dairy farm, and all the grandkids had their turn working on the farm while growing up.  College never was in Wade’s future, and he was already trucking after school hauling milk.

Starting his own trucking company and buying his first truck on September 11, 2001, Wade was at Kenworth signing the paperwork on that first truck when the twin towers were hit in New York City.  That is a day he remembers very vividly, recalling every detail during that time.  He was still hauling milk, but soon thereafter started pulling flatbed trailers to haul lumber within Michigan.

In 2006, Wade’s older brother Ryan and his wife Julie started Diesel Freak in Gaylord, MI, to help bring innovative technologies into the trucking industry.  Being a part of and having a passion for the trucking industry, they wanted to be able to create products to help truckers make improvements on their trucks, including such products as their patented Diesel Freak Power Harness.

Over the years, Diesel Freak has continued to grow and, in 2014, their growth required more people – this is when Wade decided he would come onboard with Diesel Freak full time.  At this point in Wade’s trucking company, it was either grow more or not, so in April 2014, Wade sold his trucking company but kept two trucks, including a black Peterbilt which he intended to fix up and make into a show truck.  The other truck he kept was that first brand-new truck he ever purchased – a 2007 Kenworth W900L with a Caterpillar C-15 Acert.

A turn of events had Wade quickly selling his Peterbilt when one of Diesel Freak’s good customers and friends, Dan Humm, put his Kenworth W900 for sale.  Everyone at Diesel Freak knew this truck very well, including the engine and drivetrain.  Dan’s truck was bought and went on to become Foolish Pleasure, a truck that race fans and truck fans have grown to love and appreciate.

Dan was the originator of this truck and had it set up in a way that Wade couldn’t think of anyone else owning it.  Having been involved in pickup truck pulls since 2009, Wade purchased the Kenworth in July 2016 with the intent of hauling his pulling pickup truck to events with it.  His pulling pickup was supposed to be completed in 2016 after the engine blew up in 2015, but that also changed with the new possibilities available for semi-truck pulls and drag racing, so Wade decided to focus on building the Kenworth, instead.

As mentioned previously, Foolish Pleasure is a 2000 Kenworth W900 with a 1MM 3406E Caterpillar under the hood, an 18-speed transmission, 3:07 rear gears, and a 265” wheelbase.  The truck sports a Jones Performance hood, 8” Dynaflex stacks, and tuning done in-house by Diesel Freak.  What does everyone want to know about the truck?  The most popular question is, “How much horsepower does it put out?”  Well folks, as Wade said, “It is unknown, but it definitely has enough!”  In street mode, the truck pushes 700 horsepower, but in race mode on the dyno, it will spike in power and almost does a burnout.  The capacity of power has the tires spinning on the dyno, if that gives you any idea.  I’ve had the chance to see that firsthand on the Diesel Freak dyno, and I don’t know what I loved more, all that black smoke or the sound of that CAT!

On several occasions, Wade and Ryan went to Canada to take in some big horsepower racing to see what it would take for Wade to compete.  The first pull that Foolish Pleasure competed at was in Morley, MI at the “Celebration on the Pond” semi pulls.  Morley is known as the trucking capital of Michigan, as it has more trucks than people.  Morley is also home to the National Tractor Pullers Association’s (NTPA) super semi puller and champion LD Carey, whose family actually promotes and produces the “Celebration on the Pond” event.

All the work done on this hot rod KW is done primarily in-house, except for some of the engine work, which is outsourced to good friends of theirs, ELM Truck Repair out of Edgar, WI.  In more recent years, Steve Mitchell, who used to own his own custom truck shop, repainted the frame and frame cover, as well as custom built the battery boxes for the truck, which you see on it today.

I asked Wade what advice he would give someone looking into semi racing and he said, “I hope you don’t have any other addictions, because this one gets expensive.”  He also went on to say it isn’t a bad path to go down because the only competition you have is on the track.  He has made many friends doing this, and they have all become family.  Everyone helps each other out in one way or another, and the events they all attend have become “family gatherings” of sorts.  One thing he mentioned that every beginner needs to hear, “Don’t give up after one 3-day event because you didn’t do well or even if the truck breaks.  Seat time is required for you to learn and become in-tune with your truck.  The more seat time you get, the more you will learn about your truck and from others around you.”

Wade’s main concentration was semi-truck pulls, but in 2017 their friend Mike Sturgill said he bought Onaway Speedway and was going to build an asphalt track for the first time in the United States and do Canada-style uphill drag races.  Wade, along with everyone else at Diesel Freak, was on-board from the get-go, and Diesel Freak is one of the major sponsors of the events every year.  Not only is there the Great Lakes Big Rig Challenge in May every year since their inaugural event in 2018, but they also added a fall event in September every year called Over The Top Diesel Showdown.  These are two shows Wade participates in with his KW, along with that 2007 W900 I previously mentioned which Reg, Wade’s dad, races.

In 2017 Foolish Pleasure started earning a name for herself.  Wade said it took three events to get the seat time needed to learn to not only race, but also to win.  At the Guilty By Association Truck Show semi pulls, Wade placed first.  At the 2018 Great Lakes Big Rig Challenge, the truck/driver combination placed third, followed by the 2018 Guilty By Association Truck Show where they took second in the daytime dirt drags and first in the sled pulls later that night.

2019 was a pretty good year for Wade, too, when he started dating his lovely girlfriend, Mickie Michalke, who became his shotgun rider.  Wade said from the start she has been his number one fan and is always there for support.  He laughed when he said she rides with him every time, and every time she laughs like it is her first ride.  Mickie assists wherever there is a need, which is always a big help.  As 2019 unfolded, May came quickly, bringing the second year of the Great Lakes Big Rig Challenge, where they placed fifth, and then at the Over The Top Diesel Showdown he won his class.

Due to the pandemic, 2020 had a short list of events, but Wade still made it to the rescheduled Great Lakes Big Rig Challenge in September and took first place in the B Class loaded, fourth place in the B Class Bobtail, and first place in the B Class Sled Pull.  Wade’s hometown pull in Rosebush followed Onaway, where he placed first in the Altered class (semis that are street legal) and second in the Hot class (dedicated semi pull truck).  Wade’s favorite place to pull, by far, is Rosebush.  The funny part is that he bobtailed to Rosebush then, after the races, went to Mount Pleasant, MI and hooked to a trailer to deliver a load to Gaylord on his way home.

Proud of what he does on and off the track, Wade is also proud of the company he is part of.  Diesel Freak is all about helping the trucking industry with ways to increase fuel mileage and performance.  Also, more importantly, truckers are often under-appreciated, so Diesel Freak is all for boosting morale and horsepower.

Today, Wade’s uncle and cousins now own MLT, Inc. so, in essence, it has remained in the family.  2020 was the year Wade was going to race in Canada for the first time, but we all know how 2020 went.  Wade and the crew at Diesel Freak are gearing up for an exciting 2021 full of pulls and racing, and fans (including myself) are in anticipation of Foolish Pleasure coming to a town near them.  Keep your eye out because you just never know what this truck will be doing, including driving somewhere bobtail, transporting Wade’s newly built pulling pickup truck, toting the Diesel Freak merchandise trailer, or maybe even hauling a load once in a while.

I have been able to observe Wade both when he is racing and when he is in the pit area.  Those who know Wade, know that he is approachable and all for talking with people to help grow their excitement for this sport.  The pictures in this article were taken at the pulls from GBATS in 2017, the Great Lakes Big Rig Challenge in 2018, GBATS in 2018, and the Great Lakes Big Rig Challenge in 2019.  By far, my most memorable time was at the 2019 Great Lakes Big Rig Challenge in Onaway, MI when Wade invited me and my best friend Leah to hop in the truck to see and feel firsthand what it’s like during a race.  The adrenaline rush had me giggling the whole time, and it wasn’t like anything I had ever experienced before – and the word “awesome” is the only thing I can come up with to describe it.

Special thanks to Wade for his time in gathering the information needed to bring this article together, along with a few miscellaneous shots, and for the continued friendship.  Also, thank you to Mickie’s son Collin for helping to get the portrait shots I needed.  You can watch videos of this truck in action, but I don’t believe videos will do it justice.  Seeing all the black smoke and personally witnessing the seemingly endless power it creates is something to behold.  As always, to all the drivers out there doing the deal, truck safe.