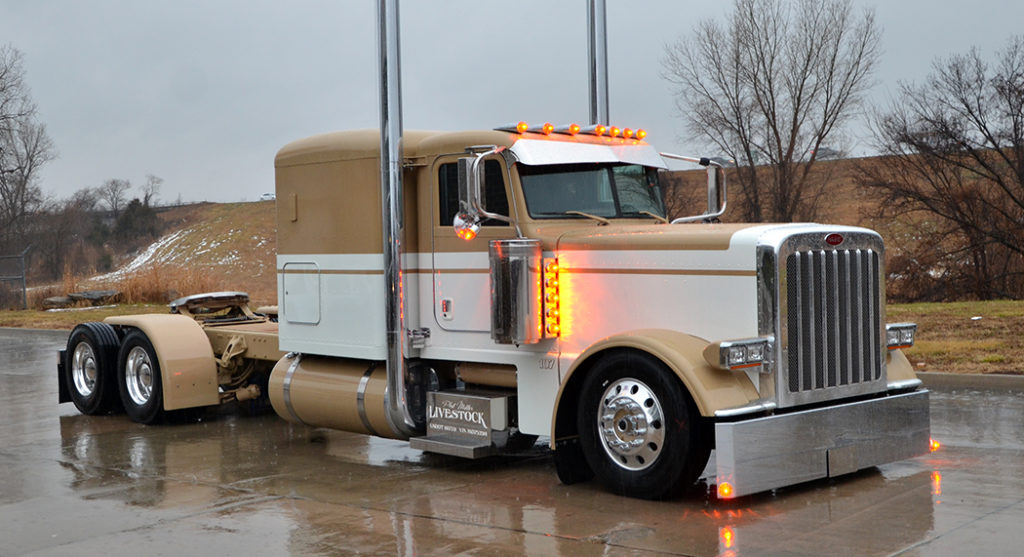 This month’s creation was built for Phil Miller of Phil Miller Livestock Transportation, LLC.  Phil is not only a west coast legend, but also a former 10-4 Magazine cover feature trucker (March 2015).  Married to his “cow truckin” wife Faren since August 2020, they met while cow truckin’ and just started talking.  One thing led to another, and here we are.  We love Faren here at KC Peterbilt – she is a hoot.  She grew up in a trucking family that included livestock haulers and loggers, so she gets it.

After being on the cover of 10-4 Magazine with his famous cream and fudge 2010 Peterbilt 389, Phil bought a sweet cream-colored flattop in 2016 from us that we had drop-shipped to Rod Pickett in Arizona, and man that build was cool.  Phil made it out to the Truckin’ for Kids show in California in 2017 and the truck was a fan favorite.  He ran that rig until he sold it and ordered the new one seen here.  Also, in July of 2019, Phil purchased another new Pete 389 from me for his friend and driver, Mike.  This truck is a tan-colored standup with brown stripes, and it still resides in the Phil Miller fleet.

Before Phil ordered this new Peterbilt, he reached out to Jim “Higgs” Higgins at 12 Ga. Customs to help him design the paint scheme.  Higgs did an amazing job photoshopping a tasty scheme in caramel and vanilla for Phil’s latest truck (and he also designed the stripes on Mike’s truck, too).  The new truck is a 2021 Peterbilt 389 with a 72” flattop, a 605-hp Cummins X15, an 18-speed, sitting on Low LowAir, and literally loaded up with all the good stuff – and more!

When the new truck came in, Cody was given the responsibility to do the build, and he had some extra motivation.  His son is a big Phil Miller fan, and he couldn’t believe that his dad was building a truck for Phil.  During the last week of the build, Cody’s wife was due to have their fifth child.  Cody asked his wife if she could just hold off a couple days so he could finish Phil’s truck.  We are glad she has a great sense of humor.  Note: she had the baby on Saturday, and Phil and Faren came on Monday to pick up the truck.  Our crew stepped up and helped as much as they could before Cody returned on Tuesday and they left on Wednesday.

Pat the painter laid out Higgs’ design and buried the stripes in several coats of clear until it was smooth to the touch.  Some of the exterior modifications and add-ons included removing the window and re-skinning the passenger side door, shaved hood emblems and hood pulls, painted half fenders, strapless breathers with chopped screens, (7) cab lights, painted drop panels, a stainless visor and battery boxes, painted 379 double-square headlights, and extra grill bars.  The truck also got a Horst front air-ride, an 18” bumper, 7” exhaust, painted air and fuel tanks (with polished ends), a hidden DEF tank, lots of tastefully placed lights, and so much more.

The inside is amazing, as well.  Along with installing a full button-tuck upholstery kit, we also painted the dash panels and door inserts, painted the steering wheel and column, and moved ten of the dash switches to an overhead console.  The dash got a full Rockwood switch setup, the seats were mounted on custom bases, and the sleeper has a refrigerator/microwave combo from Iowa Customs.

Faren drives the cream and fudge Peterbilt in the spring and fall when things get really busy.  Faren and Phil have one son together, Reid, who was born on 10-7-18, just a few days after 10-4 Day (October 4).  The truck number on this new ride (107) represents Reid’s birthday.  This new truck is Phil’s 10th one, and it officially marks the beginning of the next chapter in his ongoing “cow truckin” story.