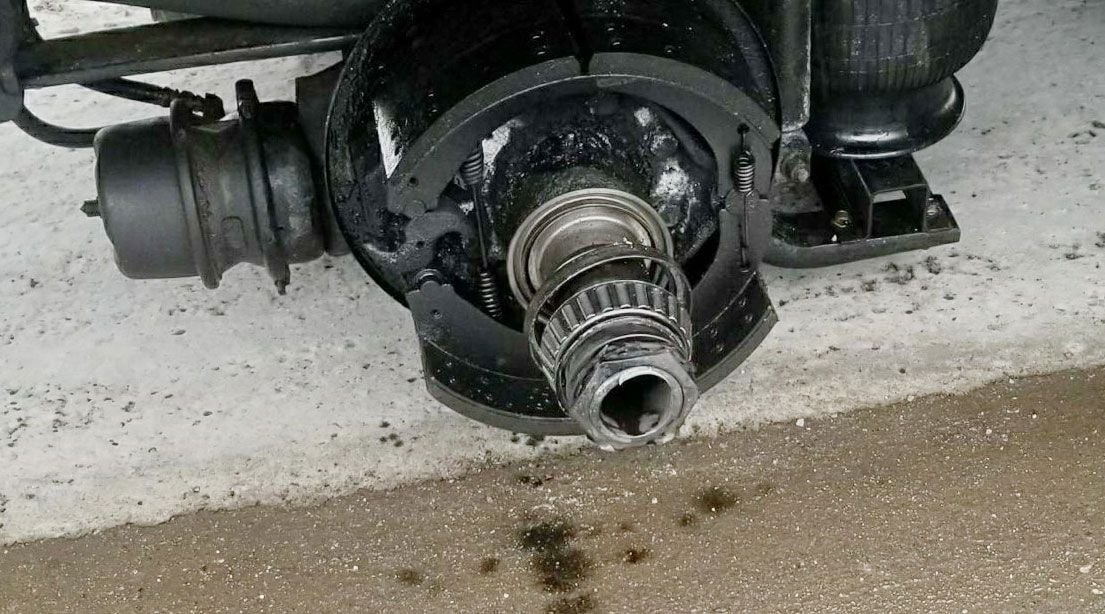 The causes of wheel separation are well known. They include bearing failures; loose, broken, or missing wheel fasteners; damaged wheels, and to a lesser degree, failures of certain axle and suspension components.

What’s not as well understood is why these events continue to occur.

The Canadian province of Ontario has done loads of research into wheel separations and is probably the most active jurisdiction in North America when it comes to wheel-separation investigation. More than 2,300 wheel separations were reported there between 1997 and 2019, and 11 people lost their lives to separated truck wheels during that period, according to the province’s Ministry of Transportation.

Investigations conducted by the province determined that 26% of separations resulted from bearing or wheel-end failures, while about 65% were wheel-fastener related. In 83% of the reported incidents, repairs or maintenance had been performed on the suspect wheel(s) a short time prior to the separation. In one case, a vehicle traveled just 355 miles before a separation occurred following the installation of new brake linings at the suspect wheel position.

Despite the abundance of training material and step-by-step instructions provided by wheel component suppliers, industry associations and others, wheels continue coming off trucks. Keeping wheels where they belong should simply be a matter of process and procedure. Here are four reminders of what needs to be done when servicing truck tires and wheels to ensure they don’t wind up in a forest or a field – or the front seat of an oncoming car.

1. Be Finicky About Wheel Bearings

While slight preload of the bearings is regarded as the optimum environment, determining it is almost impossible without special tools, such as Temper Axle’s Doctor Preload bearing adjustment tool, distributed by Meritor.

To combat inconsistency in adjustment, component suppliers publish installation instructions (not installation guidelines). There also are generic instructions such as Recommend Practice 618B from the American Trucking Associations’ Technology & Maintenance Council. This RP describes a nine-step installation and adjustment process, depending on the type of wheel-end assembly, finishing up with the use of a dial indicator to verify correct adjustment.

But industry sources say that because it’s finicky and time-consuming, the final step is often left out – despite being one of the most critical parts of the process.

“That’s a recommendation for an ideal situation,” admits John Heffernan, SKF key account manager. “Getting techs to use torque wenches was a huge step for the industry. Use of dial indicators is growing, and more fleets are adopting the practice, but we still have a long way to go.”

Jeremy Gough, director of national fleet maintenance at Bison Transport, one of the consistently safest fleets in North America, has a second technician check the work before the truck or trailer is released from the shop. “A second set of eyes goes a long way to ensuring the job is done right the first time,” he says. “It takes a bit longer, but it’s less time-consuming than dealing with a failure.”

One option is switching from conventional to pre-adjusted hubs, sometimes generically called “pre-set” hubs – although, much like people call any clear tape “Scotch tape” or any facial tissue “Kleenex,” that’s actually a brand name associated with ConMet (Consolidated Metco).

“This technology takes bearing adjustment out of the hands of the commercial vehicle manufacturer and guarantees that equipment leaves the factory with wheel bearings optimally adjusted for miles of service with a minimum amount of required maintenance,” says Roger Maye, ConMet’s national service manager.

With pre-adjusted hub assemblies, a precision-machined hub combined with tight tolerance bearings and spacer provide a fixed dimensional distance between the inner and outer bearing. Simply spinning on the axle fastener and torqueing exactly to the manufacturer’s specification sets the bearings properly every time, without the need to verify end play with a dial indicator, says Drew Coen, Stemco’s wheel-end product manager.

“Pre-adjusted hubs are easier to install and eliminate the need for fleets and repair facilities to have multiple parts to build a complete wheel-end,” Coen adds. “The pre-assembly of the components and ease of install saves the mechanics time and eliminates wheel end installation mistakes that could lead to costly and/or unsafe conditions as the vehicle is put back into service.”

Bill Hicks, SAF-Holland’s director of product planning, says fleets are slowly shifting to pre-adjusted hubs for the labor savings and the relative ease of installation.

“We’ve seen slow but steady growth in orders for pre-adjusted hubs on our axles,” he says. “They cost more because of the more precise machining and the tighter tolerances involved, but it becomes a value equation for the fleet. They are easier and less time-consuming to install, and they usually come with longer warranties. As well, when the technicians follow the installation instructions, the bearing is pre-tightened properly every time. It takes away some of the technician’s ‘discretion’ in how the hub and bearings are installed.”

Hicks cautioned that technicians may still need some training to help them identify a pre-adjusted hub. There’s risk of damage to the bearings and the bearing spacer if excessive torque is applied to the retaining nut during installation.

Bearing condition can be checked during regular preventive maintenance inspections by jacking up and safely supporting the wheel and rotating it while listening for noise. Maye suggests placing a hand on the steering knuckle or brake chamber to check for vibration when the wheel is rotating. Next, check for movement or “chucking” by placing a pry bar under the tire and, with one hand on top of the tire, lift the wheel-end and feel for movement between the hub and the spindle.

“Make sure to grease the kingpin on steer axles before this test, as kingpin wear can feel like wheel-end chucking,” he says. “If excessive movement is found, wheel-end service is required.”

Trailer hubs lubricated with semi-fluid grease should be inspected annually by removing the hubcap to check the presence and condition of the lubricant. Add additional lubricant if the ends of the bearing rollers are not covered. If the lubricant appears dried out, the wheel-end should be removed, cleaned, reinstalled, and new lubricant added to the proper level. Maye suggests either using the fill-plug magnet on PreSet hubs or placing a handheld magnet into the lubricant well to check for metallic particles. “If metal bits are found, the hub should be disassembled to find and correct the source of the issue.”

Before you even think about putting the wheel back on the truck, be certain the contact surfaces between the hub and the inner and outer wheels are absolutely free of dirt, rust, grease and other contaminants.

“A buildup of foreign material on the wheel-end mounting surfaces causes extra thickness in the joint,” explains Brandon Uzarek, Accuride’s field engineer for wheels. “The foreign material may settle or work its way out of the joint, causing the tension in the bolt to decrease, resulting in a loss of clamping force.”

Extra care is needed with painted steel wheels. Rust can develop under the paint if the finish is broken, causing flaking. This material can drop out over time, reducing the clamping force. The coating thickness on a painted wheel is important, too, as coatings thicker than 3–3.5 mils can affect the mounting surfaces between the bolt holes.

While there’s little published research on the impact of hardware aging and degradation caused by use and environmental factors, research by Ottawa, Ontario-based Woodrooffe and Associates, published in the paper “Heavy Vehicle Wheel Separations: Exploring the Causes,” suggests that re-using degraded flange nuts could cause problems.

“Anecdotal tests have shown that as [two-piece] flange nuts age, or when they are re-used, their torque/clamping force characteristics can be as little as 50% of the design value,” the report notes. “Given that hub-piloted wheels depend exclusively on clamping force to prevent the wheel from separating from the hub, such a reduction in clamp force characteristics represents a significant risk to wheel separation.”

Tighter is not better, especially when re-using studs and nuts. Many technicians attempt to achieve maximum clamping force by applying more than 500 lb-ft of torque without realizing the possible consequences.

“If a wheel stud is subjected to excessive torque, it is possible to stretch the stud past its yield point,” cautions Accuride’s Uzarek. “If this occurs, the joint will act as if it is under-torqued – and there will be lower, not higher, clamping force.”

Stretched studs will have deformed threads. Check the condition by hand-threading a new nut and observing any unusual resistance to hand-turning. That could indicate stretching. When fastening the nuts to their final torque, use only a calibrated torqueing device.

With all that said, there remains one step in this process that fleets rarely, if ever, comply with: the wheel-fastener retorque. The manufacturers of heavy truck wheels recommend that wheels be checked for correct torque between 50 and 100 miles after wheel installation. Doing that is extremely difficult in a logistics sense for most fleets, but there are alternatives.

Some suggest running the truck around the yard with a loaded trailer, doing a series of tight right and left turns and hard brakes, to give the wheels an opportunity to settle onto the studs and against the mounting face of the hub, and then retorquing them. Others recommend flagging the unit for a retorque the next time it arrives in the yard.

Neither situation is ideal, but both are better than completely ignoring the requirement to retorque the wheels after installation.

Make Drivers Your Eyes and Ears in Wheel-Off Prevention

Wheel separations seldom occur without warning. Drivers should be able to detect a problem while it’s developing if they are vigilant and doing walk-around inspections en route as they should.

“Bearing failure leading to a separation takes time — first, for the lubricant to leak out, which leaves very visible oil residue on the inside tires, and then the bearing has to heat up enough to self-destruct,” says Jeremy Gough, director of national fleet maintenance at Bison Transport. “Drivers should be made aware of the symptoms of a pending bearing failure, such as oil on the tires, excessively hot wheel hubs, smoke, or a burning odor from the wheels or grinding noises.”

Drivers should periodically check the operating temperature of the hub, either with their hands or with an inexpensive infrared thermometer, after a period of operation without excessive braking, advises Roger Maye, ConMet’s national service manager. “The maximum safe operating temperature is ambient temperature plus 150 degrees. If temperature is higher, the wheel-end should be disassembled and inspected to ensure the components are safe for continued use – and also to determine the source of the heat.”

Drivers should also be alert for ABS warning lights coming on unexpectedly, which Gough says could be caused by a loss of contact between the ABS sensor and the excitor ring, caused by a wheel wobbling around on the axle spindle. “At Bison, drivers are trained on what they can do to prevent wheels from coming off,” he says.

Maye suggests drivers should be checking the condition of the wheels, looking for cracks and for loose, broken, or missing wheel nuts, studs and hubcap fasteners. “Dark or rusty streaks coming from the wheel bolts could be signs of loose fasteners,” he cautions.

All this requires a little effort on the drivers’ part, but they are the ones closest to the equipment while it’s in operation. That said, drivers shouldn’t be considered the one and only line of defense against wheel separations.