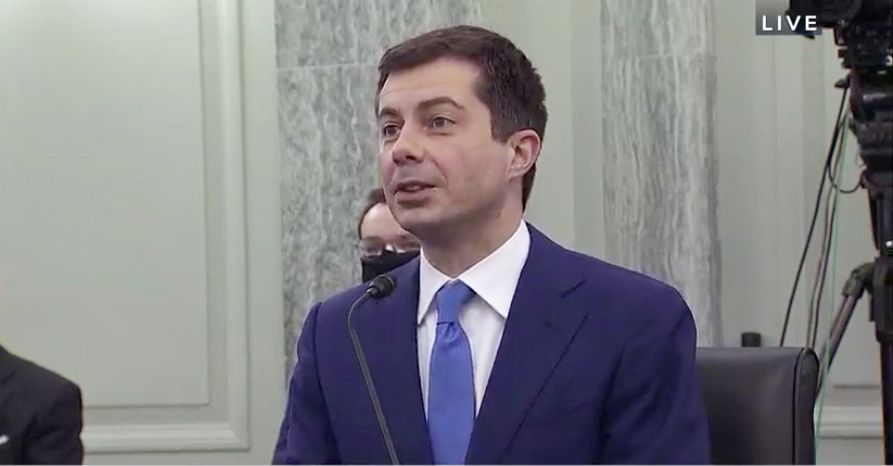 Pete Buttigieg, former Democratic presidential hopeful and former mayor of South Bend, Indiana, faced a mostly friendly Senate in his confirmation hearing for secretary of transportation Jan. 21, emphasizing a commitment to both safety and infrastructure improvement.

In his prepared remarks, right up front he addressed safety, saying, “Safety is the foundation of the department’s mission, and it takes on new meaning amid this pandemic. We must ensure all of our transportation systems – from aviation to public transit, to our railways, roads, ports, waterways, and pipelines – are managed safely during this critical period, as we work to defeat the virus.”

But he immediately followed that with infrastructure. “We also have a lot of work to do to improve the infrastructure in this country, a mission that will not only keep more people safe, but also grow our economy as we look to the future.” And many of the questions from the Senate Commerce, Science, and Transportation Committee that was holding the hearing also dealt with infrastructure issues.

The Biden administration views an infrastructure plan as a broad umbrella that could help it achieve other goals, such as creating jobs and addressing climate change.

Based on reception he received from both sides of the aisle, it seems likely that Buttigieg will be confirmed, so let’s dig into the infrastructure issue a little more.

The Problem with Infrastructure

Infrastructure is one of those things that is oft-heard on the presidential campaign trail, because it garners wide bipartisan support. In the 2016 elections, Hillary Clinton proposed a five-year, $275 billion infrastructure plan. Donald Trump went even bigger, proposing to spend $500 billion on infrastructure (which he later doubled to $1 trillion.)

Politico.com at the time included the infrastructure promises among the campaigns’ unlikeliest promises, saying, “Both Clinton and Trump have promised big-spending infrastructure plans to revitalize the nation’s highways, railroads, bridges and airports — while largely skipping the hard questions about how to pay for it.” Clinton said her plan would be paid for with “business tax reform,” but Politico noted that Trump was “even more nebulous on how to pay for it, essentially suggesting it would be financed through debt, such as bonds.”

Trump did not succeed in his infrastructure plans. The Republican-held Senate passed a modest $287 billion infrastructure funding measure in 2019. Last summer, the Democratic-held House passed a huge $500 billion, partisan “green” infrastructure bill that it had to know would go nowhere in the Senate. The two sides eventually simply extended the 2015 surface transportation law by a year, to Oct. 1, 2021.

During his confirmation hearing, Buttigieg cited a “bipartisan appetite for a generational opportunity to transform and improve America’s infrastructure.”

The problem is, although “infrastructure” as a general concept has broad bipartisan support, the definition of what that includes varies greatly – as do beliefs on how we should pay for it.

Republican lawmakers tend to think of infrastructure in a more traditional way: highways, bridges, airports. However, Democrats increasingly want it include things such as broadband internet access, electric-vehicle charging, and incentives to drive the increased adoption of electric vehicles and clean-energy production to power them.

And no matter how you define “infrastructure,” the hard part is figuring out how to pay for it.

“Transportation infrastructure investment around here has always been an area for bipartisan cooperation,” said Sen. John Thune, R-S.D., during Buttigieg’s confirmation hearing. “The other thing that enjoys bipartisan popularity around here is not paying for it.”

How Should We Pay for Highways (and other infrastructure)?

The federal fuel tax hasn’t been touched in nearly 30 years, despite a hike being supported by groups as diverse as the U.S. Chamber of Commerce, the AFL-CIO, and the American Trucking Associations. Trucking would prefer this over public-private options such as adding more toll roads or adding tolls on existing highways, which seem to ask road users to pay twice, with trucking’s higher tolls bearing the brunt.

One problem with the fuel tax is that with more fuel-efficient and electric vehicles hitting the road, it would continue to bring in less and less money. That’s why a vehicle-mile tax has been discussed for years. It was part of a detailed infrastructure plan Buttigieg proposed when he was running for the presidential nomination. And Rep. Sam Graves, R-Mo., the ranking member of the House Transportation Committee, has also advocated using VMT.

However, critics say there are technological and privacy issues that a VMT tax would have to face. That could result in the government looking at a trucks-only version, since commercial trucks, being regulated already by the federal government, don’t have the same privacy rights as private citizens.

In 2019, the federal Congressional Budget Office explored VMT for commercial trucks in a report. It pointed out that interstate trucking operations already have to track their miles per state for fuel-tax reporting purposes. The CBO also suggested electronic logging devices or RFID tags like those used in many tolling systems.

That report estimated that in 2017, a tax of 1 cent per mile on all roads would have raised about $2.6 billion for the trust fund if imposed on all commercial trucks and about $1.6 billion if imposed only on those with one or more trailers. However, it noted, such a tax would impose greater costs on the federal government and trucking companies than increasing existing taxes.

Other options mentioned during the presidential campaign include higher corporate or individual tax rates.

Biden’s allies in the business community have been meeting to craft a set of proposals, including a potential carbon tax, according to published reports. A carbon tax is a fee imposed on the burning of carbon-based fuels, such as coal, oil, and gas. This could not only help pay for highways but also meet Biden’s goals of reducing carbon emissions.

We’ll hear all this and more discussed in the coming months, as Biden has put infrastructure near the top of his priority list, after addressing the COVID-19 pandemic and shoring up an economy hard hit by its effects.

The American Trucking Associations urged the Senate to move swiftly to confirm Buttigieg.

“Having served as the mayor of a city sitting at the crossroads of America, Mr. Buttigieg has had an up-close and personal look at how our infrastructure problems are impacting Americans — and how important it is to solve them,” said ATA CEO Chris Spear in a statement. “As he conveyed throughout his testimony today, greater federal investment in infrastructure is critical to enhancing transportation safety and growing our ailing economy. That work begins with securing immediate funding to address our short-term needs over the next decade while we develop new, technology-driven solutions over the long-term, and ATA stands ready to assist the Biden administration in advancing a robust highway funding bill across the finish line.”

There were few questions related to trucking regulations brought up during the confirmation hearing, and Buttigieg’s general response was that he would have to look into these issues more closely, recognizing the difficult balancing act between industry needs and safety.

Roy Blunt, R-Mo., asked about issues involving a “patchwork of different laws” from state to state regarding trucking. He noted that the prior Transportation Secretary Elaine Chao was able to pre-empt California rules about meals and rest breaks that were different from federal rules and had been “wrongly applied” to interstate motor carriers. That decision was recently upheld by a federal appeals court. “My hope is that this issue is now settled,” Blunt asked. “Do you have any thoughts about that?”

Buttigieg responded that he would have to look into the relevant laws, “but [I] certainly recognize the importance of consistency, predictability, and the key of course is squaring that with that fundamental mission of safety.”

Sen. Deb Fischer, R-Neb., grilled him on flexibility in hours of service rules, including rules for agriculture and livestock haulers that face unique challenges. Buttigieg acknowledged that “sometimes our policies can’t tell the difference between live animals and other cargo” and said it was something he would look into.

She also asked about the recently proposed pilot program for greater flexibility in sleeper rules. Again, he responded that he would want to take a closer look at this with stakeholders “to determine how the program squares the goals of safety with the goals of flexibility.”

We have a real chance to deliver for the American people—to build our economy back, better than ever, and the @USDOT can play a central role in this. pic.twitter.com/0RaNJb0fyB